xxxxxRobinson Crusoe, based on the true life story of the mariner Alexander Selkirk, is important for its part in the development of adventure fiction. It was written by the English writer and journalist Daniel Defoe in 1719, and was followed by Memoirs of a Cavalier, Colonel Jack, Moll Flanders and Roxana. A man with strong political views, he wrote on current affairs and, at one time, his criticism of the Church of England landed him in prison for five months. While there he planned his political periodical The Review. This was published for nearly ten years, and paved the way for journals like The Tatler and The Spectator. He took part in the Monmouth Rebellion of 1685, and supported the new king, William III, with his True Born Englishman. Defoe was followed by a line of English novelists which included Richardson, Fielding, Smollett and Sterne, and the story of Robinson Crusoe provided the basis for The Swiss Family Robinson, published by the Swiss writer Johann Rudolf Wyss in 1813 (G3c). 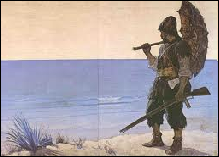 xxxxxRobinson Crusoe, written in a clear and direct style, is one of the best known books in world literature, and it has been translated, adapted and imitated countless times over many years. Even though it is loosely based on the true life adventure of the mariner Alexander Selkirk, it is important above all for its part in the development of adventure fiction. Indeed, many would argue that it was the first successful novel in English literature. 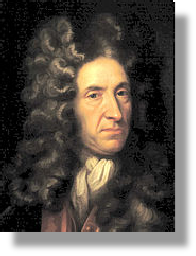 xxxxxIts author, the writer and journalist Daniel Defoe, led a varied life and one which was not without its own ups and downs. He later wrote of himself (characteristically): No man has tasted differing fortunes more, and thirteen times I have been rich and poor. He was born in Cripplegate, London and was trained for the Presbyterian ministry at an academy in Newington Green. At the age of 25, however, he entered the world of business, starting as a hosier and travelling a great deal both at home and on the continent. He was not particularly successful in his commercial undertakings, however, and by 1692 he had been declared bankrupt no less than three times, once with debts amounting to some £17,000. Nevertheless, he kept up his business interests until 1703.

xxxxxA vehement opponent of the Roman Catholic James II, he took an active part in the ill-fated Monmouth Rebellion of 1685, and was overjoyed at the arrival of William III in 1688. In 1695 he took up a civil-service post and held it for four years. It was during this period that he wrote his well-argued Essay on Projects, a work which included social questions such as the higher education of women, the care of the mentally retarded, and the need for an income tax. It was after leaving this employment that he turned his hand to serious writing. 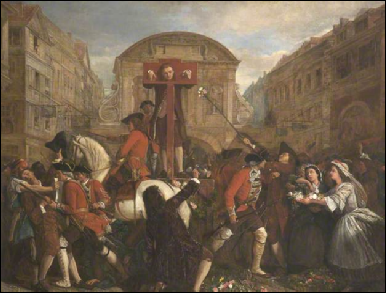 xxxxxHis first work of note was the satirical poem The True-Born Englishman of 1701, a criticism of those who resented the new king simply because he was of foreign birth. His second, the following year, entitled The Shortest Way with Dissenters - a satirical dig at the attitude of the Anglican church towards nonconformists (like himself) - landed him in Newgate prison for five months on a charge of seditious libel. For this misdemeanour, he was also placed in the pillory on three occasions, but his witty Hymn to the Pillory amused the sympathetic crowd, and they pelted him with flowers! And it was while in prison that he started planning his political periodical, The Review, a highly successful tri-weekly publication which first appeared in 1704 and ran for nearly ten years. This had a marked influence on the development of later journals, such as The Tatler and The Spectator, the work in large part of the essayists Richard Steele and Joseph Addison.

xxxxxA man of strong political views, he firmly supported the union of England and Scotland, and spent some time in Scotland promoting the idea. Two years after the act was passed, he published his A History of 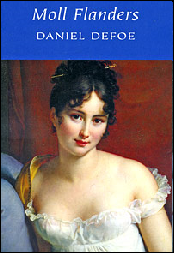 the Union of Great Britain. This, and his work for The Review, earned him long-term employment as a political agent and pamphleteer. In 1719, however, he shot to fame with his realistic and enthralling story about The Life and Adventures of Robinson Crusoe, and he followed this up with his equally convincing Memoirs of a Cavalier, Colonel Jack, The Fortunes and Misfortunes of Moll Flanders - his famous work about a London prostitute - and Roxana. In all he may well have written more than 400 stories, political tracts and social commentaries during a prolific writing career. Perhaps worthy of special mention are his Journal of the Plague Year of 1722 - which reads like an eye-witness account - and A Tour Through the Whole of Great Britain, completed in 1727.

xxxxxDefoe was the first in a line of talented English novelists in the 18th century who showed a remarkable insight into human nature. He was followed by such writers as Samuel Richardson, Henry Fielding, Tobias Smollett and Laurence Sterne. And the story of Robinson Crusoe - a shipwrecked sailor having to fend for himself on a tropical island - served as a basis for another popular children's classic, The Swiss Family Robinson, published in 1813 (G3c) by the Swiss writer Johann Rudolf Wyss.

xxxxxIncidentally, Defoe was the son of a butcher by the name of James Foe, a man of Flemish descent. It would seem that Defoe added the “De” to his name around 1700, possibly to revive the 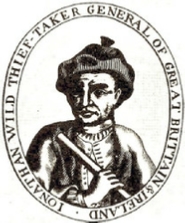 family's original name … or perhaps to give it a bit of class! ……

xxxxx…… InxJune 1725 Defoe wrote The True and Genuine Account of the Life and Actions of the late Jonathan Wild. Known as the “Prince of Robbers”, Jonathan Wild, born in 1683, was hanged at Tyburn in May 1725 after a life of crime. Claiming to be the “Thief-taker in General of Great Britain and Ireland”, and applauded for his efforts in catching thieves, he was, in fact, the mastermind behind a number of gangs - pickpockets, muggers and burglars - which were at work in the wealthy areas of London during the early years of the 18th century. One of Britain’s most infamous criminals, he was eventually found out, but not before he had been generously rewarded for returning stolen goods and sending some sixty thieves - members of his own gangs! - to the gallows. It is likely that Defoe’s Moll Flanders was based on the life of Moll King, a prostitute and thief who lived with Mary Milliner, Wild’s first mistress. ......

xxxxx…… The Beggar’s Opera of 1728, the work of the English poet and dramatist John Gay, was based upon the relationship between Wild and Jack Sheppard, a notorious housebreaker of the time, and The History of the Life of the late Jonathan Wild, the Great by the English novelist Henry Fielding, published in 1743, was a satire in which Wild’s downfall was likened to the fall from power of the chief minister Sir Robert Walpole the previous year.