xxxxxThe outstanding French poet Chrétien de Troyes is best remembered for his five Arthurian romances - Erec, Cliges, Lancelot, Yvain and the unfinished Percival, produced in 1183. Full of courtly love and knightly chivalry, it is in these works that we first learn of the great knight Lancelot and the legend of the Holy Grail. Some of his source material came from the Roman de Brut. Written by an Anglo-Norman writer called Wace, this epic was itself based on the earlier work by Geoffrey of Monmouth. In his turn, Chrétien influenced the works of a number of English poets, including Chaucer, Spenser, and Malory. 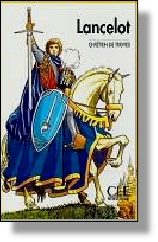 xxxxxLittle is known of the life of the French poet Chrétien de Troyes, but his work spans a period of some thirty years (1155-1185). He was the first to weave romantic accounts of love and knightly chivalry into a meaningful story and, by setting much of his later work at the court of King Arthur, he was able to infuse high adventure and Celtic mythology into his tales. It is not surprising, therefore, that he is best remembered for his five Arthurian romances, Erec, Cliges, Lancelot, Yvain and the unfinished Percival, produced in 1183. It is in these works that we first learn of the great knight and hero Lancelot, and are introduced to the legend of the Holy Grail, the chalice used by Christ at the Last Supper. 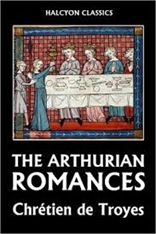 xxxxxChrétien clearly invented some of his material, but it is quite likely that, apart from other sources, he leaned heavily upon the Roman de Brut, the work of an Anglo-Norman writer called Wace. This epic, itself based upon an earlier work by Geoffrey of Monmouth, was circulating in France about the year 1155 and was thus readily available. Dedicated to King Henry's wife Eleanor, it was full of Arthurian legend and included the story of the Round Table.

xxxxxChrétien's work, written in verse and designed to be read out aloud to an aristocratic audience, added substantially to the content and popularity of King Arthur and the fanciful legends that surround him and his court. It is little wonder that Chrétien's influence can be seen way into the future, notably in the works of Chaucer, Spenser, Malory and Wagner. He may rightly be regarded as the greatest poet in the tradition of courtly love, chivalry and romance.