xxxxxThe Ming Dynasty was founded in 1368 and, as we have seen (1414 H5), reached the height of its power under Emperor Yung Lo in the early 15th century. Then in 1449 the empire under Cheng-T’ung was seriously defeated by the Oirats. It managed to recover, but with the coming to power of the ineffectual Emperor Chia-Ching in 1521, the empire descended into chaos, and by 1550 the country was being invaded by Mongols in the north-west and sea raiders along the coast. Some order was later restored, but although the empire survived until 1644 (C1), it never regained its former glory. The reign of Chia-Ching is notable for the introduction of gilt tracery and a range of rich colours in the production of Chinese porcelain.

xxxxxThe Ming Dynasty (meaning "Brilliant" dynasty), was founded in 1368 by Chu Yuan-chang and, as we have seen (1414 H5), reached the height of its power in the early years of the fifteenth century under its most outstanding emperor Yung Lo. Even so, by the end of his reign there was the growing threat from the Mongols along China's northern borders and this came to a head in 1449 (H6), during the reign of Cheng-T'ung. Lacking a competent military leader, the Chinese suffered a serious defeat at the hands of the Oirats, the Western Mongols, in a battle near Peking. Thousands were slaughtered, the capital was besieged, and the Emperor himself was captured and held for a year. This was a serious blow to the prestige of the Ming Dynasty, but a recovery of some sort was achieved and a period of comparative peace was maintained until 1521. 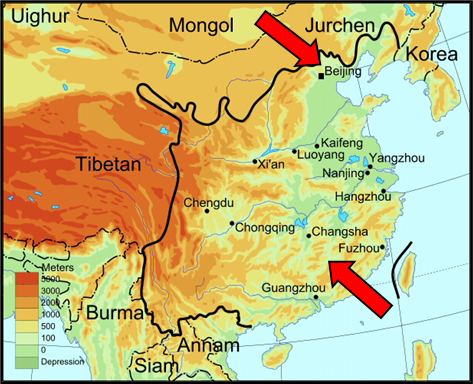 xxxxxIt was in that year that Chia-ching, the eleventh emperor of the Ming dynasty, came to power and presided over a reign of disorder and terror. The rule of the country was given over to a few favourites, and hundreds of officials who attempted to restore government control were tortured or killed. Byxaround 1550 the country was being attacked on two fronts. Mongol tribesmen under their able leader Altan Khan (1507-1582) were surging across the Northwest frontier, besieging Peking almost at will. Meanwhile, in the south-east, sea-raiders, based in Japan, were attacking coastal shipping and, landing ashore, were penetrating deep into the Yangtze Delta, killing and plundering as they went.

xxxxxMing power was somewhat restored under Chia-ching's successors. In the 1560s the coastal raids were all but suppressed, and attacks by Altan Khan were successfully repulsed, eventually forcing him to make a peace settlement. Good administrators and capable generals brought a period of stability. As we shall see, it was not until the next century, with the coming of the Manchus in 1644 (C1), that the Ming Dynasty finally came to an end. 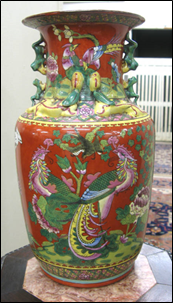 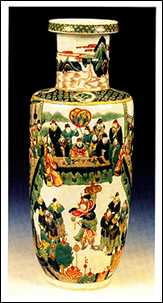 xxxxxThe reign of Chia-ching saw a decline in the quality of Chinese porcelain itself but, at the same time, there was a remarkable influx of rich colours - notably dark blues, reds and greens - together with the introduction of gilt tracery work. During the early part of the Ming dynasty not a great deal of this porcelain found its way to Europe. To ensure that the Chinese people were not defiled by contact with the "barbarians", private trade was prohibited and Europeans were not welcomed. By 1450, however, smuggling and piracy were rife, and by the present reign thousands of Chinese traders had settled in various parts of South East Asia, acting as agents for known suppliers in China. Meanwhile, Portuguese traders, who had first appeared in Ming China in 1514 and were fully aware of the big money to be made, were not deterred. Having already established themselves in southern India and Malacca, they began using Macau and Canton, both on the Pearl River estuary, as unofficial trading posts. Not surprisingly, within a decade or two other Europeans were appearing on the scene.