xxxxxThe Carmelite order was founded on Mount Carmel in 1155 by a small band of pilgrims and former crusaders. It followed a strict code of conduct until the middle of the 13th century when, threatened by the advance of the Muslims, its members left Palestine and became mendicant White Friars in Western Europe. In the 16th century the original code was reintroduced, and the friars and nuns, adopting the wearing of sandals, became known as the Barefooted Carmelites. The Convent of St. Joseph in Avila, Spain, the first house of the reformed movement, was founded by St.Teresa in 1562. 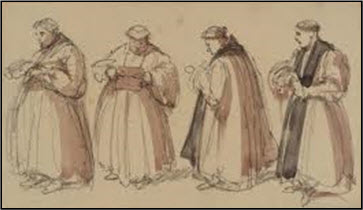 xxxxxThe Carmelite order was founded on Mount Carmel (hence the name) in 1155 by a small band of pilgrims and former crusaders, possibly led by Berthold, a crusader from Calabria. It has been suggested that the founder members were inspired by the prophet Elijah who, according to the Old Testament, lived on the Mount and was regarded in the early church as the founder of monasticism. Following an austere code of conduct, they lived as hermits in separate huts until the middle of the thirteenth century when, threatened by the advance of the Muslims, they left Palestine and eventually became mendicant friars in Western Europe. It was here that they became known as White Friars because of the white cape they wore over their brown habit. 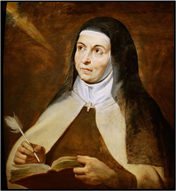 xxxxxIn the sixteenth century the movement was drastically reformed. The Spanish mystics, St. John of the Cross and St. Teresa of Avila, both alarmed at the decline of the order from its original ideals, established a stricter order for both friars and nuns called the Discalced or Barefooted Carmelites, the members wearing sandals instead of shoes. In 1562 St. Teresa founded the Convent of Saint Joseph in Avila, Spain, the first house of the reformed movement. Today both Orders are involved in teaching, preaching and missionary work. A third Order has also been formed to care for the sick.