xxxxxThe South Sea Bubble was a serious stock market crash in London following the collapse of The South Sea Company. Having acquired the Asiento de Negros, a monopoly in the slave trade, the price of shares in the company rose substantially, and then increased tenfold when the company took over half the national debt in exchange for trade concessions. There followed a frantic wave of speculation with many people being duped into buying shares of non-existent companies. When the Asiento de Negros proved unprofitable, the bubble burst in 1720, and many banks, small companies and thousands of investors were ruined. In addition, a number of politicians were accused of bribery in the matter. Two died while under suspicion, and one committed suicide. As a result, Robert Walpole was recalled as Chancellor of the Exchequer, and he took steps to restore confidence, but only about one third of the money was recovered. 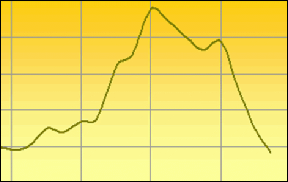 xxxxxThe South Sea Bubble was a serious stock market crash in London, centred around the fortunes of The South Sea Company. Founded in 1711 by the statesman Robert Harley, Earl of Oxford, this company had acquired the Asiento de Negros, an agreement providing a monopoly of trade - mainly in slaves - with Spanish colonies in South America. By all accounts, this commercial enterprise offered a sure way of “getting rich quick”. With a guaranteed interest of 6 percent, investment was exceedingly brisk, and became even more so when George I became the company’s governor in 1718. By then the price of the company’s shares had rocketed, with interest running at 100 per cent. Then in the spring of 1720 the company offered to take over more than half the national debt in return for further trade concessions, and when Parliament (following the payment of some enormous bribes) accepted this offer, there followed a frantic wave of speculation. Within a few months, the company’s stock had soared to ten times its nominal value. In the meanwhile, a vast number of persuasive promoters - the vast majority of them rogues - made a fortune selling dodgy investment or the shares of non-existent companies!

xxxxxBut in September 1720 the huge bubble burst. The Asiento de Negros, won by Britain at the Treaty of Utrecht, had not proved so favourable as had been expected. Not only had it imposed a hefty annual tax on the traffic in slaves, but normal trade to South America had been restricted to just one boat a year. In reality, there were no vast profits to be made. Seeing the writing on the wall, the chairman, secretary and some of the company's directors sold out and, as a result, stocks plummeted, banks and small companies collapsed, and thousands of investors were ruined. Little more than one third of the original capital was r 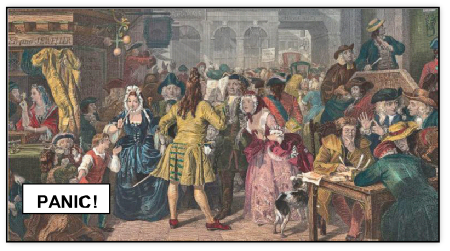 ecovered for the innocent albeit gullible stockholders.

xxxxxTo make matters worse, the government was thrown into turmoil when a parliamentary investigation disclosed that company officials, including at least three high ranking politicians, had accepted bribes during the affair. Two Whig ministers, Stanhope and Sunderland, died under the strain of the post-mortem, and the postmaster general, Craggs, implicated in the scandal, almost certainly took his own life. The political crisis that followed brought Robert Walpole back into power, He was now re-appointed First Lord of the Treasury and Chancellor of the Exchequer. He immediately transferred the company's stocks in equal parts to the Bank of England and the East India Company. By so doing he restored public confidence in the market, saved the Whig government, and earned the valuable support of the king, who had not come out of the matter without egg on his face! For the record, most of the company's rights were sold to the Spanish government in 1750, and in t

his format the South Sea Company survived until 1853.

xxxxxIncidentally, in the year of the calamity, a set of South Sea Bubble Playing Cards (“Bubble Cards”) was produced, and this provided an amusing as well as an informative record of the effects of this financial disaster!

xxxxxA similar stock market collapse, the Mississippi Bubble, occurred on the continent at this time. John Law, a Scottish financier living in France, set up a company to develop the Mississippi valley. In 1719, with investment at a high level, he decided to take over the entire trade in French tobacco and slaves. But by then some 625,000 shares had been allocated. To promote confidence, Law then began exchanging shares for Government bonds, but this only fuelled speculation in the stock market, outside as well as inside France. The crash came in 1720, when profits could no longer match investment. Law’s company and bank collapsed, bringing financial ruin to thousands of investors. Law thought it wise to depart for Venice where he died, so we are told, a poor man. In the meantime the French government had to take over the company’s debts and, by increasing taxation, meet part of the loss.

xxxxxBut this shock to the financial system was not confined to Great Britain. Throughout Europe at this time - finally at peace following the Treaty of Utrecht - a boom in stock market speculation had occurred, fuelled by the prospect of making a quick fortune in the expanding colonial markets of the New World. This led to a series of stock market crashes, and one in particular more than matched the South Sea fiasco for its size and severity - the Mississippi Bubble. 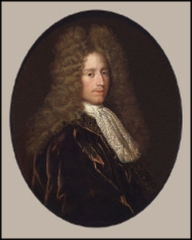 xxxxxThis scheme, which triggered off a frenzy of speculation and ended in financial disaster for many, was the brainchild of John Law (illustrated), a Scottish financier living in France. In 1716, backed by the government, he set up a General Bank to provide low interest loans to private business. Then in 1717 he established the Company of the West with exclusive rights to develop the valley of the Mississippi River, a vast stretch of territory claimed by the French in North America. Two years later - and now the country's comptroller general - he merged this enterprise with the Company of the Indies, taking over the entire trade in French tobacco and African slaves, and obtaining, thereby, a virtual monopoly over France's colonial trade, as well as a big say in the country's financial affairs.

xxxxxProspects for a handsome return on investment looked good, and the company began well, but as public demand for shares rocketed, their value became unrealistic. By 1719 some 625,000 had been issued and Law, attempting to stabilise the position and, at the same time, reduce the huge national debt which had accumulated during Louis XIV's reign, began exchanging company shares for government bonds (illustrated). These securities, clearly regarded as a safe investment, fuelled a massive stock market boom, in other countries as well as in France.

xxxxxAt the same time, the French government, in order to encourage their sale, issued an ever increasing amount of paper money. Unfortunately, however, the company profits could in no way match investment, and in 1720, amid run-away inflation, his company and bank came tumbling down. Thousands of investors faced financial ruin and, although Law was not directly to blame, in December of that year he thought it advisable to get out of France. At that time he might well have had in his luggage a copy of his best-known work on economics (written in 1705), Money and Trade Considered, with a Proposal for Supplying the Nation with Money! Ironically, we are told that he died in Venice, a poor man. As for the company, its debts were taken over by the state, and taxes were raised to pay them off in part.