xxxxxIn 1715, with a German king on the throne, the Jacobites (supporters of the son of James II) made another attempt to restore the Stuarts to the throne of England and Scotland. Many supported their cause, especially in Scotland, but in the November a Scottish force could only draw with a government army at Sheriffmuir, and rebels from the north of England were roundly defeated at the Battle of Preston in Lancashire. When the Old Pretender (“James III”) arrived at Peterhead the following month he found himself without an army, and was forced to return to France in the New Year. It looked as if the Hanovarians were there to stay but, as we shall see, a more serious rebellion, led by Bonnie Prince Charlie, was to break out in 1745 (G2). 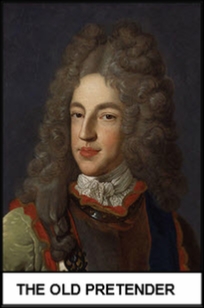 xxxxxWith a German king on the throne who could hardly speak a word of English, and who spent most of his time in his beloved Hanover, it is hardly surprising that the Jacobites - supporters of the Old Pretender (son of James II) - considered the time was ripe for yet another attempt to restore the Stuarts to the throne of England and Scotland. On the surface, it was not a cause without a hope. There was still a substantial amount of support for the Jacobites in the British Isles. The Roman Catholics - particularly strong in Ireland - were clearly in favour of the Catholic Stuarts, and many Tory Anglicans, unlike the Whigs, had always been uneasy about the validity of the so-called Glorious Revolution of 1688. Furthermore, in Scotland, many of the Highland clans remained loyal to their own line of kings. If there was a time to restore the Stuarts to the throne, then this was it.

xxxxxAs we have seen, following the sudden and undignified departure of James II, and his decisive defeat at the Battle of the Boyne in 1690, his son, James Edward, had made one half-hearted attempt to put the clock back. In 1708, with the aid of the French, he had mounted an "invasion" of Scotland, but his ships had been driven off by the English navy and bad weather long before they reached dry land. The event of 1715, however, known as the “Fifteen Rebellion”, was a more serious affair, though it proved to be sadly lacking in the quality of leadership necessary to topple the first of the Hanovarians.

xxxxxAs one might expect, it began in Scotland. Here in September, John Erskine, the Earl of Mar, gathered a Jacobite force at Braemar in support of "James III (of England) and James VIII (of Scotland)". He marched his followers as far as Perth, but then hesitated before taking on a government army, a smaller force, under the command of the Duke of Argyll. Thexoutcome was the drawn Battle of Sheriffmuir in the November. Some 12,000 Jacobites fought against 4,000 English troops and both sides claimed the victory! Meanwhile, a force of rebels in the north of England, led by Thomas Foster, was roundly defeated at the Battle of Preston in Lancashire. Fought in the town itself, the Jacobites were heavily outnumbered and forced to surrender early on the second day. The Old Pretender, arriving at Peterhead the following month, found himself without an army and with little support. In February 1716, together with his chief supporters, he was obliged to return to France, his cause well and truly lost.

xxxxxInitially, the rebels were harshly treated, but in 1717 an Act of Grace provided for the release of Jacobites held in British prisons. Meanwhile, in the same year the French made a pact with Britain and promised to oppose the Jacobites. The Old Pretender, having settled in France, had to take refuge with the papacy. The next rising in support of the Stuarts took place two years later. It broke out at Glenshiel in Scotland, and was supported by Spain, but it was quickly suppressed. It seemed that the Hanovarian monarchs had come to stay but, as we shall see, the final Jacobite rebellion of 1745 (G2), led by the Young Pretender, Bonnie Prince Charlie, proved a much greater testing time for the British government and Crown. 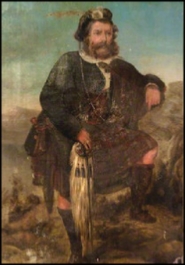 xxxxxIncidentally, the Highland outlaw Rob Roy ("Red Rob") belongs to this period - real name Robert MacGregor. He is thought to have made his living by cattle stealing, but falling on hard times, was destitute by 1712. When the rebellion of 1715 came along, he ostensibly threw in his lot with the Jacobites, but in fact he stole from both sides. Some time in the early 1720s he was arrested, kept in Newgate Prison, London, and then sentenced to be deported to Barbados. In 1727, however, he was pardoned. He doubtless returned to Scotland where, in later life, he became a Roman Catholic. The Scottish writer Walter Scott based his novel Rob Roy around his exploits, but, taking poetic licence, made him out to be a Scottish version of Robin Hood. ......

xxxxx...... John Erskine, 6th Earl of Mar, had been Secretary of State for Scotland in the reign of Queen Anne, but when he was dismissed from office by George I, he promptly threw in his lot with the Jacobites. When the Fifteen Rebellion failed, he fled with the Old Pretender to France and then to Rome, but in 1725 he was sent packing by James Edward for intriguing against him! Because of his tendency to shift his political allegiance as it suited him, he earned the nickname "Bobbing John". ...…

xxxxx...... Atxthe Battle of Preston the English Jacobite leader William Maxwell, Earl of Nithsdale, was captured. He was brought to London in 1716 and, at his trial in Westminster Hall, was condemned to death and taken to the Tower of London to await his fate. With his wife's assistance, however, he disguised himself as a woman and walked out to freedom! He fled the country with his wife and they settled in Rome.