THE BATTLE OF YORKTOWN 1781 and REASONS FOR THE BRITISH DEFEAT

xxxxxAs we have seen, following the entry of France into the war in 1778, the British switched their operations to the south, occupying Georgia, capturing Charlestown and defeating the rebels at the Battle of Camden. But resistance continued by guerrilla tactics. The British were defeated at the Battle of King's Mountain and at Cowpens in January 1781, and Cornwallis was held to a draw at Guilford Court House two months later. The crown forces then made for the Virginian coast, where Cornwallis fortified Yorktown. It proved a mistake. Wellington, together with French troops, laid siege to the port, and a large French naval force, having repulsed a British squadron at the Battle of Virginia Capes, blockaded Yorktown by sea. His forces surrounded, heavily bombarded, and fast running out of food and ammunition, Cornwallis had no alternative but to surrender his army of 8,000 men to the allied forces in October 1781. With this defeat, the war was virtually over, though it was two years before the last of the British troops left. In the meantime, at the Peace of Paris in September 1783 Britain recognised American independence. 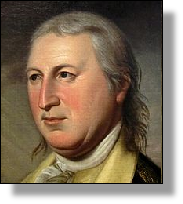 xxxxxAs we have seen, following the entry of France into the war in 1778, the British concentrated their operations in the southern states. In 1779 Georgia was occupied, Charlestown was captured with a garrison of 5,000 men, and a rebel force, led by General Gates (illustrated), was roundly defeated at the Battle of Camden in South Carolina. But these victories, impressive though they were, did not put an end to resistance. In the vast areas of wooded terrain the colonists, using guerrilla tactics, harassed their enemy at every turn, and in October 1780 won a major victory - and a powerful psychological boost - at the Battle of King's Mountain, wiping out some 1000 loyalist troops in a well planned ambush. 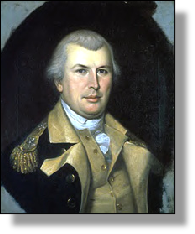 xxxxxAtxthe same time a third American army, under the command of General Nathanael Greene (1742-1786) (illustrated), co-ordinating his campaigns with the guerrilla forces, carried out a number of lightning attacks, winning a battle at Cowpens in January 1781, and holding General Cornwallis to a draw at Guilford Courthouse two months later. Then, while the British made for the Virginian coast, aiming to join up with forces sent from New York, and to gain access to a suitable port, Greene returned to South Carolina. There he was defeated at the battles of Hobkirk's Hill in April, Ninety-Six in June, and Eutaw Springs in September. Nonetheless, during this period he managed to seize all but two of the loyalist outposts; only Charleston and Savannah were able to hold out.

xxxxxThe British move to the coast, and the fortification of the port of Yorktown proved a mistake. At the time, in fact, General Clinton, feared that Cornwallis was laying himself open to a land and sea blockade, and so it proved to be. In September, seizing the opportunity, Washington hurried south and, supported by French troops under the Comte de Rochambeau, placed Yorktown under siege. Meanwhile a French naval force of 24 ships, led by the Comte de Grasse, had arrived in Chesapeake Bay with 3,000 troops. Axsmaller British naval squadron was despatched from New York, but was repulsed by the French at the Battle of Virginia Capes just outside the bay (illustrated) in September 1781.This serious defeat effectively cut off any hope of help by sea, whilst on land, Cornwallis found himself besieged by a force of some 14,000 Franco-American troops, led by Washington and the French commander the Marquis de Lafayette. 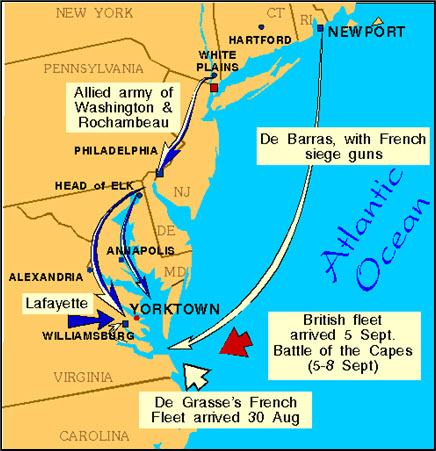 xxxxxThe massive artillery bombardment of Yorktown that then followed (3,600 heavy shot over nine days), plus the steady erosion of the port's defences, made the British position hopeless. On the 19th October 1781, totally surrounded, outgunned, and fast running out of food and ammunition, Cornwallis surrendered his garrison of 8,000 men and 240 guns to the allied forces. It was the second entire army to be lost to the rebels. The first, in 1777, marked the turn of the tide in favour of the Colonists, the second marked the end of the war. The "rebels" had triumphed. Britain began to run down its land forces, but still had to contend with French and Spanish opposition in other parts of the world, as well as the League of Armed Neutrality, a sizeable coalition of European states. In the West Indies, they won the naval Battle of the Saints in April 1782, but later that year entered into negotiations for a settlement in North America. For the British the war had become too demanding and too costly. Over the next year or so - amid a great deal of violence and havoc be it noted - thousands of loyalists were evacuated from the former colonies, and hostilities were officially ended in February 1783. The last of the British troops left in the November, and Washington re-entered New York in triumph. As we shall see, the Treaty of Paris was signed in September 1783 and ratified by the Continental Congress early in the New Year.

xxxxxIn brief, the major reasons for the British defeat were British miscalculation, American determination, and French intervention. The British over-estimated the strength of loyal support in the colonies, particularly in the south, and they failed to capitalise on their victories. Their military commanders were not really of the required standard, failing to adapt their tactics to a different type of warfare and a more hostile terrain. Nor were the political leaders any better. George III proved too obstinate, and his two senior ministers, North and Germain, lacked drive and initiative. This said, the crown forces were fighting some 3,000 miles from their home base, and were up against a determined, well-led enemy who, knowing the terrain, used guerrilla tactics to deadly effect. The Battles of Saratoga, followed by the intervention of the French in 1778, proved the turning point in the rebels' favour. The French, having gained command of the North American coastal waters, denied vital support to the government forces, and this led to the defeat of Cornwallis at the Battle of Yorktown in 1781. By then, with the cost of the war spiralling and there being little chance of regaining the initiative, the British were obliged to recognise American independence. 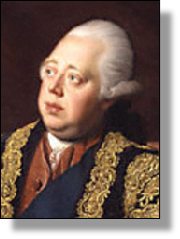 xxxxxThe major reasons for the British defeat were - in seven words - British miscalculation, American determination, and French intervention. As far as their final campaign was concerned, conducted in the south, the British failed to capitalise on a string of successes, particularly their comprehensive victory at Camden in August 1780. Furthermore, they over estimated the strength of loyalist support in this area, and did not fully recognise the vital importance of sea power, especially in keeping command of the North American coastal waters. It must be said, too, that, in the war as a whole, they lacked military commanders of the required quality. Burgoyne, Cornwallis and Howe, for example, might well have been competent enough in the conventional battles of a European campaign, but they failed to adjust their strategy to the type of warfare which developed in North America, where the application of military power required the rapid movement of troops, and where prompt advantage had to be taken of enemy weakness wherever it occurred.

xxxxxAnd there was, too, a serious lack of co-ordination between commanders in the field, seen at its worst just prior to the decisive Battles of Saratoga in 1777. Nor were their political leaders any better. George III was an obstinate man, determined to hold on to the colonies at any cost, whilst his two senior ministers, Lord North (illustrated above) and later Lord George Germain, were uninspiring and lacking in initiative.

xxxxxThis said, the British were faced with an uphill struggle from the very beginning. Fighting a war in a hostile terrain some 3,000 miles from home, amid an armed population which became progressively more hostile and determined as the struggle continued, posed a daunting task. They were eventually worn down by a local militia and a Continental Army which, though overwhelmed at times, were inspired by the leadership of men like Washington, von Steuben and Greene. After the first flush of victory, the British redcoats fell victim to guerrilla tactics, waged by Colonists who, having a cause to fight for, knew their terrain and used their knowledge to deadly effect. 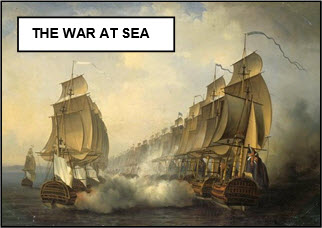 xxxxxAnd to this must be added the hit and run raids carried out by ships of the Continental Navy in British coastal waters as well as those of North America - exemplified by the exploits of commanders like John Paul Jones. Then in 1778 the final piece of the jigsaw for victory fell into place. France, convinced by the Battles of Saratoga that the colonies had the men and the means to win their fight for independence, declared war on Britain and stepped up their aid. The British feared for their mastery of the oceans - the Atlantic in particular - and their fears proved fully justified. For the French it was to be a matter of sweet revenge. Driven out of Canada by the British in 1759, it was to be their support, both on land and at sea, that was to help drive the British out of their North American colonies 22 years later. 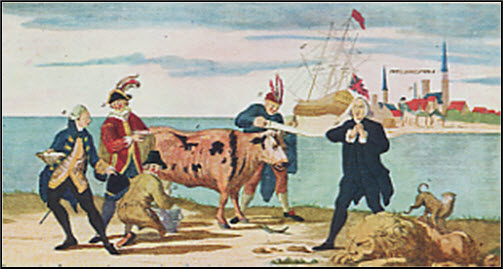 xxxxxThis cartoon, drawn in 1778 and entitled "The State of the English Nation" says it all following the French decision to enter the war. It shows an English cow being milked by a Frenchman, a Dutchman and a Spaniard, whilst an American saws off its horns. Meanwhile, a distraught Englishman is unable to arouse a slumbering British lion, and a British man-of-war is shipwrecked on the coast of North America! 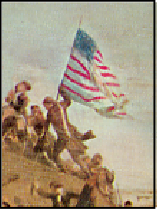 xxxxxIncidentally, on the night of the 14th October 1781, during an attack upon the British forces at Yorktown, the Americans managed to raise the Stars and Stripes. The event was later “captured” by the French painter Eugène Lami (1800-1890) and echoed many years later when a monument was made to commemorate the raising of the flag on the island of Iwo Jima, captured by U.S. marines in 1945 during the closing stages of the Second World War in the Far East. ……

xxxxx…… According to an account by an American officer who witnessed the surrender at Yorktown, “The British officers in general behaved like boys who had been whipped at school. Some bit their lips, some pouted, others cried”.