xxxxxIt was in February 1554 that the English soldier Sir Thomas Wyatt the Younger, opposing the proposed marriage of Roman Catholic Mary I to Prince Philip of Spain, led an army of some 3000 men to London. But Mary rallied the citizens to her support, and very few of them joined the rebels. The revolt was quickly crushed and Wyatt was executed. Had such a force been raised later in the reign, the result might well have been different. As it was, for a time the life of Princess Elizabeth was put in danger. 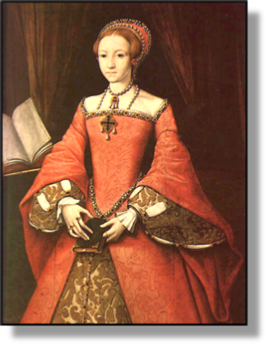 xxxxxFor a number of years before 1550, Sir Thomas Wyatt the Younger (c1521-1554) served with distinction as a soldier abroad, mostly in France. On the death of Edward VI he supported the accession of the Roman Catholic Mary, but support turned to opposition when he learnt of the Queen's proposed marriage to Prince Philip, the future king of Spain. Regarding this as an affront to national pride, he joined a plot to depose Mary and put her half-sister, Elizabeth (illustrated), on the English throne. When word of the plot leaked out, and his fellow conspirators were arrested - including the Duke of Suffolk, father of Lady Jane Grey - Wyatt quickly took action on his own.

xxxxxAs a sheriff in Kent, he gathered an army together at Rochester and marched on London in January 1554. Numbering some 3000 men, the rebels reached the centre of the capital in early February, but mainly due to a speech by Mary, rousing the inhabitants to her support, few of them joined the rebels when they turned up. After a brief skirmish with the royalist forces, Wyatt surrendered, and in March he was tried and executed. The uprising put Princess Elizabeth in danger. For a time she was imprisoned on suspicion of being implemented in the rebellion, a charge strongly denied by Elizabeth and Wyatt himself. She was later released after publicly professing the Roman Catholic faith.

xxxxxUnsuccessful though it was, the rebellion proved to be one of the most potentially dangerous uprisings ever faced by the Tudors. Had such a large force been raised later in the reign, when Mary's popularity was at a much lower ebb, it might well have succeeded. As it was, Wyatt and his fellow rebels came to be regarded as martyrs in the cause of patriotism. 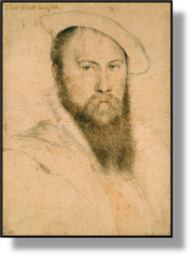 xxxxxIncidentally, Wyatt's father, Sir Thomas Wyatt the Elder (1503-1542) was a famous poet in the reign of Henry VIII. He is remembered above all for introducing the Italian sonnet into English verse. A number of his lyrics owe much to Petrarch, but some of his best poems are based on his own experience in the pursuit of love. It was to this end, no doubt, that he became a lover of Anne Boleyn before her marriage to the king, a liaison for which he was twice imprisoned on suspicion of treason! A member of the Court, some of his songs and sonnets were not published until 1557, during this reign. He also served as a diplomat and went on several overseas missions. He was knighted in 1537.