xxxxxThomas Wolsey was born in 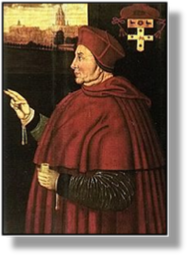 Ipswich, the son of a butcher, and educated at Oxford, graduating at the age of fifteen. After being ordained a priest in 1498, he was made chaplain to Henry VII in 1507 and was thus in a favourable position when he entered the service of the young Henry VIII on his accession in 1509. His loyalty, efficiency and self-confidence were quickly recognised, and he made rapid progress, being made Archbishop of York within five years, and Cardinal and Lord Chancellor in 1515. From then until his fall from favour in 1529, he dominated English politics both at home and abroad. During this period he became, without doubt, the most powerful man in the land, the last of the great clergyman to wield such power and acquire such enormous wealth (said by some to be second only to the king’s). At various times he was Bishop of Lincoln, Durham, Winchester and Bath and Wells - all well paid appointments plus the perks that went with them - and in 1518 he was made Papal Legate in England. York House, his home in London, was a sumptuous palace, and Hampton Court, just outside the city - built in the form of a fortress - was a colossal testimony to his wealth, status and extravagance.

xxxxxIn foreign affairs he masterminded the successful invasion of France in 1513, and negotiated a favourable peace settlement the following year. This endeared him to the king and doubtless played a large part in his rapid promotion. For many years too - up to his dismissal in fact - he tried to strike a balance of power between the two continental rivals, France and the Holy Roman Empire, playing one off against the other. For a time, this did give England a standing in European affairs which was way above its station, but the policy collapsed in 1525 with the victory of Charles V over the French and the subsequent peace settlement agreed between them. England was left isolated and cut down to size. And matters became worse in 1528 when he made an alliance with the French against Charles V, the nephew of Catherine of Aragon, just at the time when the king’s divorce was raising its ugly head!

xxxxxAt home his policy was successful in that it kept Henry firmly in charge, but Wolsey himself was certainly not popular. The heavy taxes he had to impose to pay for continental adventures, the royal court, and his own magnificent lifestyle won him no favours with public and parliament, whilst his arrogance and extravagance - always on display - aroused much resentment among the nobility, including many in court circles. His rule was unnecessarily oppressive, and his extension of the powers of the Star Chamber helped him in that direction. He had no time for Parliament, and only called it once when he was in need of supplies.

xxxxxWhen his downfall came, it came swiftly, just like his agent, Thomas Cromwell, was to find to his cost ten years later. Although he was the country’s papal legate - making him the most powerful cleric in the land - he failed to persuade the pope to grant Henry’s divorce from Catherine of Aragon - vital if the monarch were to have any hope of a successor. As a result he was summarily dismissed by the king in 1529 and replaced by Sir Thomas More. It was the chance his many enemies had been waiting for. The following year he was accused of high treason - charged with corresponding with the French court - but he died at Leicester while on his way to London to stand trial. He lies buried in Leicester Abbey.

xxxxxThomas Wolsey was ordained in 1498 and became chaplain to Henry VII in 1507. When Henry VIII came to the throne, he gained rapid promotion and was made Cardinal and Lord Chancellor in 1515. For the next fourteen years he dominated English politics, becoming extremely wealthy and powerful. His foreign policy proved successful for many years, but collapsed in 1525 when France and Charles V came to terms and left England isolated. Then, having failed to persuade the pope to grant Henry a divorce from Catherine of Aragon - vital if the king were to have an heir - he fell from favour. His policy at home had proved successful, but his oppressive rule had made him many enemies. When Henry dismissed him in 1529, he was accused of treason and died on his way to London to stand trial.

xxxxxIt was Wolsey, who, wanting a residence to befit his station, had Hampton Court Palace built on the north bank of the River Thames just outside London. It was founded in 1515 and is the largest royal palace in Great Britain, covering eight acres and having a thousand rooms. It was forcibly seized by the king in 1525, when Wolsey's power 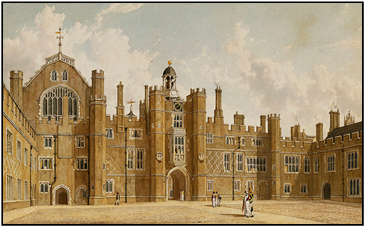 was on the wane, and the building then underwent a deal of restoration work over the years, some by the architect Christopher Wren. In character, however, it remains a very imposing Tudor palace-cum-castle with its red brick facade, ornate chimneys, and turrets and battlements.

xxxxxIt became Henry VIII's favourite residence and it was occupied by the monarch up to and including the reign of George II. It was William III who had the gardens laid out in Dutch style and who planted the famous maze within the palace grounds. Today, this maze is one of the finest examples to be found in England. Wolsey also endowed Cardinal College at Oxford, later called Christ Church, the cost, we are told, being met by the forcible closure of 29 monasteries!

xxxxxIncidentally, the English poet and satirist John Skelton (c1460-1529), an advisor to the King from about 1512 onwards, wrote a number of satirical poems while at court, some of them in doggerel form. Among these poems were three criticising the growing power of Cardinal Wolsey in both state and church affairs: Speke Parrot, Collyn Clout, and Why come yet nat to courte, all written in 1521 and 1522. ……

xxxxx…… It was four years after this that the English courtier and writer George Cavendish (c1500-c1561) entered the Cardinal's service. He proved a loyal servant to Wolsey and came to know him well. Following his master's death in 1530, he retired to Suffolk and wrote his Life of Cardinal Wolsey, the work by which he is best known. Completed in 1557, it provided a close study of the man during his years in decline, and an interesting insight into the Tudor court of his time.

xxxxxHampton Court Palace was built by Wolsey soon after becoming Cardinal and Lord Chancellor in 1515. A large and imposing building - in keeping with his status - it was seized by Henry VIII in 1525 when Wolsey's power was on the wane. Situated on the River Thames just outside London, the building has been much restored over the years, some of the restoration work being done by the architect Christopher Wren. It was Henry's favourite residence and was occupied by the monarch up to and including the reign of George II. William III laid out the gardens and planted the maze, one of the finest to be found in England.