xxxxxThose who, like witches, dabbled in “black art”, were to be found in ancient times, but, generally, it was not until the 15th century that “devil worshippers” were punished by death, based on Old Testament scripture. The first witch hunt took place in Switzerland in 1427, but it was nearly 60 years later before the pope appointed two Dominicans to stamp out witchcraft. In the hysteria that followed, trials were held throughout Europe, varying in number and the form of punishment from one country to another. Many accusations stemmed from village disputes. As a result a class of professional “witch finders” arose. In England, for example, Matthew Hopkins started a campaign in 1644, and sent some 200 to the stake or gallows over three years. Here, as elsewhere, guilt was determined by various means, including the “water test”. In Europe, trials declined significantly after 1680, but continued in the New World, one of the worst instances being at Salem, Massachusetts, in 1692 (W3). In England the death penalty for witchcraft was abolished in 1746, and the last legal execution was in Switzerland in 1782.

xxxxxSorcerers, witches and others who dabbled in the "black art" figured prominently in ancient times, notably in Egypt, Greece and Rome. As early as 367 we learn of a witch-hunt, instigated by the Roman emperor Valerian. In Medieval European society, witchcraft - seen as a survival of an ancient folk religion - was strongly associated with the worship of the devil, but punishment by death was not a common occurrence until the 15th century. It was about then the Church felt strong enough to uphold the Old Testament script: "Thou shall not suffer a sorceress to live" (Exodus 22:18). 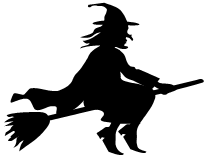 xxxxxThe first witch-hunt of modern times took place in Switzerland in 1427, but it was not until 1484 nearly 60 years later, that Pope Innocent VIII issued a bull against witchcraft, Summis Desiderantes, and appointed two Dominicans, Johann Sprenger and Heinrich Kraemer, to stamp it out. It was they who, two years later, published Malleus maleficarium (The Witches' Hammer), the first authoritative handbook on the subject and a prime cause for the witch-hunting hysteria that soon gripped Europe. Witches, it made clear, were possessed by the devil, and their evil acts ranged from turning milk sour to killing a person by a glance (the "evil eye"), or by sticking pins in a wax image of their victim.

xxxxxThe burning of witches was largely centred in Germany, Austria and Switzerland, but it was by no means confined to these countries. During the period 1580 to 1660, when the persecution of witches was at its height, trials were held throughout western Europe, but not all of them ended in the death sentence (by hanging or burning), and in a number of countries torture was not used to extract confessions. In Spain and Italy, where cases came before the Inquisition, very few were convicted, whilst in Ireland there is no record of such trials, and in the Dutch republic they were disallowed as from 1610. On the other hand, in Scotland a total of 1,350 were burned at the stake during these plentiful years - almost half of those accused - and in south-west Germany alone 3,000 witches were executed in the same period.

xxxxxIn England, it was not until the reign of Elizabeth I that anyone was executed simply for being a witch. Over the next hundred years, however, the country was gripped by a frenzy of witch hunting. A series of brutal statutes made witchcraft a capital offence, and there was no shortage of prosecutions and executions. The vast majority of witches were female, probably on the assumption that women were weaker than men and more likely to give in to the devil. Furthermore, many accusations stemmed from village disputes between neighbours, and women usually predominated in such quarrels. In such circumstances people would often inform against members of their own family and then, as a witness, be paid for their testimony! And for the same reason, a class of professional "witch finders" arose, assured of a fee for each conviction! A case in point was the Englishman Matthew Hopkins (illustrated) who, giving himself the title "Witch-Finder General", began a campaign against witchcraft in 1644 and, working in eastern England (the counties of Essex, Suffolk, Norfolk and Huntingdon) sent some 200 people to their deaths in the space of three years. In July 1645, for example, he held the largest witch trial in English history. Eighteen women were found guilty and hanged at Seafield Bay, just outside Manningtree. Guilt was decided by various methods. In England, for example, the water-test was often applied. If the woman sank when thrown into the river or village pond, she was declared innocent; if she stayed afloat she was presumed guilty! One of Hopkins’ favourite trials was to keep a suspect bound naked for 24 hours. If any animal approached this was proof enough that the woman was a witch!

xxxxxIn Europe, trials for witchcraft declined significantly after 1680, but, as one would expect, they were to be found in some parts of the Americas where Europeans had settled. There were no cases reported in Spanish and French colonies, but, as we shall see, the witch trials at Salem, Massachusetts caused a stir in 1692 (W3), when 150 people were accused in the space of nine months! In England, the death penalty for witchcraft was abolished in 1746, and the last legal execution of a witch was recorded in Switzerland in 1782. However, witchcraft and like practices are still to be found today, notably in countries of South East Asia, Africa, Latin America and isolated areas in the United States. 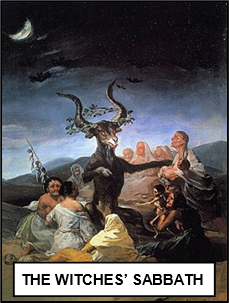 xxxxx…… The last “witch” to be executed in Britain was Janet Horne. She was burned at the stake in Scotland in 1727 or, according to some accounts, 1722. …… 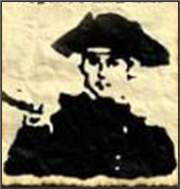 xxxxx…… Inx1849 the English historical novelist William Harrison Ainsworth (1805-1882) wrote an account of The Lancashire Witches. Known locally as the Penbury Witches, they were accused of selling their souls to the devil and murdering seventeen people who lived in the area around Penbury Hill. At their trial at Lancaster gaol in 1612, ten men and women were found guilty and hanged. Today, however, Ainsworth is best remembered for his Rookwood of 1834, a novel that popularised the story of the highwayman Dick Turpin.