xxxxxAs we have seen, in 1291 three forest cantons of Switzerland, having been taken over by the Habsburgs, formed the Everlasting League to fight for their freedom. This was the beginning of the Swiss Confederation. Over the years other cantons joined and independence was eventually achieved in 1499 (H7). The famous legend of William Tell may well have played a part in this early struggle for political freedom. It relates that in 1307, having refused to salute the Habsburg badge, he was sentenced to shoot an apple which had been placed on his son's head. He succeeded in this task and then later turned his bow on the Austrian governor, shooting him dead. This incident is said to have greatly strengthened the people's resolve to throw off their Austrian oppressors.

xxxxxAs we have seen, it was in 1273 that the Habsburg Emperor Rudolf I took over direct control of three forest cantons in what is today's Switzerland. In 1291 these formed the Everlasting League, a defence alliance to fight for their freedom. This proved, in fact, the beginning of the Swiss Confederation. Over the years more and more petty states joined in the movement and, after a long struggle, independence was achieved in 1499 (H7). 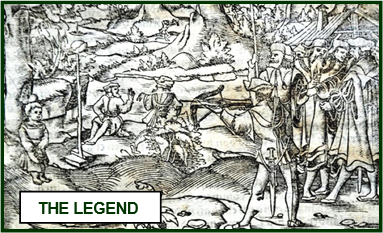 xxxxxThe legend about the archer William Tell is said to have played a part in the early days of Switzerland’s struggle for independence. The story goes that in the year 1307 the Swiss archer, a resident of Altdorf in the canton of Uri, refused to salute the Habsburg badge worn by Gessler, the canton’s hated Austrian governor. For this crime he was sentenced to shoot through an apple which had been placed on his son’s head. He accomplished this extraordinary feat, and then later, when the opportunity arose, turned his bow on Gessler, shooting him dead. This killing, symbolising his people’s determination not to submit to foreign control, is then said to have sparked off a rebellion against their Austrian oppressors, leading to the eventual unification and independence of the Swiss nation.

xxxxxThis legend was the subject of a famous drama by the German playwright Friedrich von Schiller, produced in 1804 and later, in 1829, was the basis for the opera Guillaume Tell, the much-loved work of the Italian composer Gioacchino Rossini. As one might expect, it has also featured in a number of films. Unfortunately there is no evidence to support the existence of a man named William Tell, but legend or not, in Altdorf today the spot where his son stood, awaiting the arrow, is marked by a bronze statue!

The Legend: woodcut by the Swiss artist Hans Rudolf Manuel Deutsch (1525-1571), contained in Cosmographia by the German mapmaker Sebastian Munster (1488-1552).