xxxxxThe Peace of Westphalia, which concluded the Thirty Years’ War in 1648, marked the end of the supremacy of the Holy Roman Empire under the Habsburgs, and the emergence of France as the major power in Europe. The Netherlands, the Swiss Federation, and the principalities of the Holy Roman Empire gained their independence, and Sweden took control of the Baltic Sea area. On the religious question, the Lutherans and Catholics in Germany were at last given equal rights. But the new map of Europe had been achieved at an enormous cost. Over the thirty years, vast areas of the continent had been devastated, thousands had been killed or wounded, and the suffering and the savagery had been on a large scale. 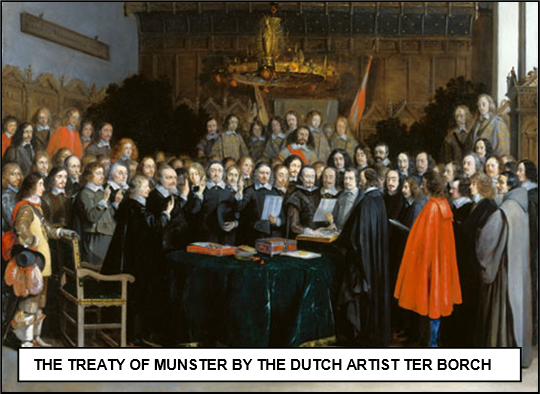 xxxxxThe Peace of Westphalia, the settlement which concluded the Thirty Years' War in 1648, was so named because negotiations took place at Munster and Osnabruck, two cities within the province. In round terms, it marked the end of the supremacy of the Holy Roman Empire under the Habsburgs - defeated as they were on the field of battle - and the emergence of France as the major power on the continent. The treaty fully recognised the independence of the Netherlands (after 80 years of armed struggle), the Swiss Confederation, and the 300 or so principalities of the Holy Roman Empire, - thereby making the Emperor a shadow of his former self. In addition, France was given Upper Alsace, along with smaller border possessions, and Sweden, by receiving certain Baltic provinces, gained control of the Baltic Sea and became the dominant nation in that region.

xxxxxOn the thorny religious question - the original casus belli - the Peace of Augsburg of 1555 (M1) was confirmed, and both Lutherans and Catholics in Germany were given equal rights. These measures were also extended to Calvinists, but they did not apply to non-Catholics living in the hereditary lands of the house of Habsburg. In general this proved an enduring compromise. Religion was destined to remain a bone of contention in the affairs of Europe, but it was to be the political rivalry between national states that was to characterise armed struggles in the future, the so-called "modern age".

xxxxxThe peace settlement aside, the ferocity unleashed by the Thirty Years’ War left vast areas of central Europe, and particularly Germany, devastated and depopulated. The deployment of more powerful artillery, and the use of firearms with a much faster rate of fire - particularly in the highly disciplined army of Gustavus Adolphus - resulted in the massive destruction of towns and villages, and an enormous increase in the number of killed and wounded, civilians as well as military. In some areas the population was reduced by two thirds or more by the devastation caused by the invading armies - many made up of mercenaries who plundered as they went, adopting what came to be known as a "wolf strategy". Such was the revulsion against the hardship, suffering and savagery caused both on and off the battlefield, that calls were made for a limit to the scope of combat and for a more humane treatment of prisoners and the wounded.

xxxxxInx1633 the French engraver and etcher Jacques Callot (c1592-1635) produced a series of prints entitled The Miseries of War, (two illustrated above), and these pulled no punches as to the dreadful plight of the common people during the conflict. Three years later the Englishman William Harvey, physician to King Charles I, saw the violence and horrors of this war at first hand when he was sent on a mission to Emperor Ferdinand II at Regensburg. He spent ten months travelling through land which had been ravaged by the war and later wrote: "The necessity they have here is of making peace on any condition, where there is no more means of making war and scarce of subsistence... This warfare in Germany ... threatens, in the end, anarchy and confusion."

xxxxxThexGerman writer Jacob Christoph Grimmelshausen (c1621-1676) served in the war as a young musketeer and later wrote of his experiences in a novel entitled Simplicissimus. Partly autobiographical, it tells the story of a young child striving to live in a Germany shattered by war and full of hunger, misery, violence and fear. The first part was published in 1669. Later, in 1799, the German poet and dramatist Friedrich von Schiller completed his masterpiece Wallenstein, a three-part work based on the events of the Thirty Years' War, regarded by many as the greatest historical drama of all time. 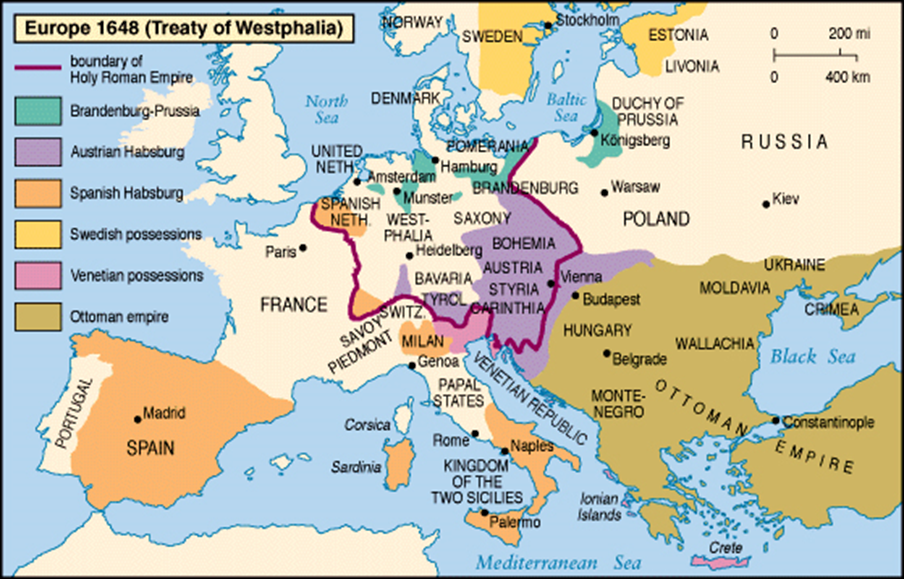 xxxxxOut of this carnage and confusion on the continent was produced a new map. Save for Germany - which was to wait many years for the unity of its jigsaw of tiny principalities - Europe was emerging as a community of sovereign states. As we shall see (CW), politics, not religion, was now to be the main stuff from which wars were made. Despite the Peace of Westphalia, the war between Roman Catholic France and Roman Catholic Spain continued unabated, whilst in the north, Sweden, took on her Protestant neighbours - notably Denmark - in the hope of establishing a united Scandinavian state.

xxxxxThe Dutch Baroque artist Gerard Ter Borch (1617-1681), by his 60 miniature portraits, provided a brilliant record of the Treaty of Munster, a part of the Westphalia settlement of 1648. He was best known, however, for his interior genre scenes, depicting with charm and accuracy the comfortable life-style of the Dutch middle-classes. His paintings are quite small in scale, but they are full of detail, skilfully illuminated, and elegant in tone and texture. Notable among his works are The Letter, The Concert, Woman writing a letter, and his charming portrait entitled Helena van der Schalke as a Child.

xxxxxThe painting entitled The Swearing of the Oath of Ratification of the Treaty of Munster (illustrated above) provides a brilliant pictorial record of the delegates of Holland and Spain, gathered at Munster to recognise Dutch independence - part of the Westphalia settlement. The work of the Dutch baroque artist Gerard Ter Borch (1617-1681), its 60 miniature portraits - each exquisitely done - provide one of the most outstanding historical records in Dutch art. But In fact, though a talented portrait artist, Ter Borch was generally better known for his interior genre scenes which portrayed with charm and accuracy the comfortable life style of the Dutch middle-classes - similar to many such works by his countrymen Jan Vermeer, Pieter de Hooch, and others.

xxxxxHis genre pieces, together with an equal number of portraits, are quite small in scale, but this does not detract from the close detail achieved, his brilliant rendering of light, tone and texture, and his rich but delicate colouring. The overall effect of his paintings is one of calm, genteel elegance. Notable works include, (illustrated below), the charming portrait of Helena van der Schalke as a Child, The Letter, The Concert, and Woman writing a letter.

xxxxxTer Borch was born at Zwolle and studied at Haarlem. He visited England in 1635, and then travelled extensively on the continent. From 1646 he spent three years in Munster, his stay coinciding with the peace congress then being held in the city. Then, after a stay in Madrid, he returned to his homeland in about 1655 and spent his last years in Deventer, serving as a member of the town council for part of that time.