xxxxxJosiah Wedgwood learnt his trade in his father's pottery and made a special study of the ceramic materials, pigments and glazes. He opened his own business at Burslem, Staffordshire, in 1760, and, by using a harder version of cream-coloured earthenware, was soon making a highly popular tableware. Admired by Queen Charlotte and named "Queen's Ware", it brought him immense sales both at home and overseas. In 1768 he built a second factory at Etruria in the "Potteries", where, using jasperware, he specialised in ornamental pottery in the neo-classical style. In the meantime he also developed a black stoneware with which he made vases and plaques, a variety of jewellery, and busts of notable people. He ran his workplaces with great efficiency, and introduced techniques which anticipated mass production. He designed new equipment, and he was the first factory owner to install a steam-powered engine. The English sculptor John Flaxman was responsible for much of the classical design work. 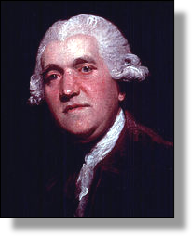 xxxxxJosiah Wedgwood was born in Burslem, Staffordshire, and, from the age of nine worked in the family pottery. An ambitious and highly enterprising young man, in 1760 he set up his own business at the Ivy House Factory, and quickly gained a reputation for the high standard of his workmanship and the much improved quality of his materials. Inquisitive by nature and with a scientific turn of mind, he was for ever experimenting with and developing a whole new range of ceramic materials, pigments and glazes. Herein was to lie the major reason for his remarkable success.

xxxxxIt was while working at Ivy House that he produced a much harder version of cream-coloured earthenware, then available but in a form far too brittle for practical use. This proved the making of him and his company. This tableware came to be much admired by Queen Charlotte, and in 1765 she gave permission for it to be known as the "Queen's ware". So popular did this product become amongst the 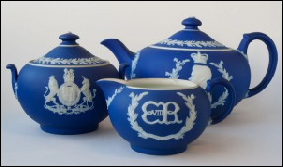 rising middle classes that he had to take over Brick House, another factory nearby, in order to cope with the demand. In the years to come, Wedgwood was to produce an immense variety of pottery shapes and designs, but it was this early creamware, tasteful in shape and decoration and highly durable, which was to be his great money spinner, attracting as it did huge markets both at home and overseas. Suffice it to say that in 1775 he produced a 952 dinner service for Catherine the Great of Russia!

xxxxxIn 1768 he built a new factory near Stoke-on-Trent, at the very heart of the "Potteries", the country's china and earthenware industry. Based on his wealth of experience, he furnished it with ovens, machinery and tools designed to his own specifications. Initially, this factory was intended for the manufacture of ornamental pottery in the neo-classical style - particularly vases - and it was for this reason that he named his new workplace Etruria, after the region in cen 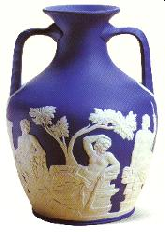 tral Italy where classical vases had been recently discovered. This new departure was based on his development of jasperware, so named because it was hard like the rock. This durable, unglazed porcelain could be stained in a variety of colours and decorated with white relief figures and scenes of neo-classical design. Using this material and technique he made copies of innumerable antique designs, including the Roman Portland Vase (which had been excavated from a tomb outside Rome in the early 17th century), notable for white relief decoration on a dark blue background (illustrated). The English sculptor John Flaxman was responsible for much of the classical design work.

xxxxxHe also perfected a black stoneware called basalt, making a great improvement upon the stained earthenware hitherto known as "Egyptian black". This enabled him to produce candlesticks, vases and plaques for interior design, and a wide variety of jewellery like cameos, bracelets and rings, as well as life-like busts of notable people, such as past and present philosophers and writers. Technically speaking, however, it was probably his fine pearl ware with a bluish tint to its glaze which was one of his finest achievements in ceramic production. 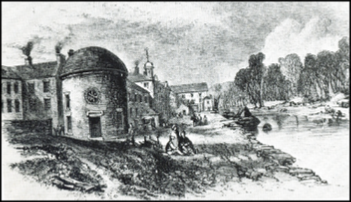 xxxxxBut Wedgwood was not merely a pottery designer and manufacturer of remarkable skill. He was also an astute businessman and an able scientist. His factory at Etruria (illustrated) was designed "with a view to the strictest economy of labour". As such, production was on the lines of the future "conveyor belt" system, in which workers specialised in a particular skill and the product itself "moved on". And, with the introduction of "transfer printing" on pottery - a technique purchased by Wedgwood in 1763 - comparatively unskilled artists could be employed, and an element of mass production could be introduced. And, given his scientific bent, it is perhaps not surprising that in 1782, Etruria became the first factory to be installed with a steam-powered engine, and that, a year later, he was made a fellow of the Royal Society for his invention of the pyrometer, a device for measuring high temperatures in his pottery kilns. And other factors also played a part in Wedgwood's phenomenal success. In 1763, for example, the Liverpool turnpike road was extended to Burslem, and 1777 saw the opening of the Trent and Mersey Canal. Such transport improvements greatly assisted the efficient movement of raw material and the finished product. It is little wonder that at the time, other pottery manufacturers - such as Meissen and Sèvres - should feel the pinch. Many were obliged to imitate the designs coming out of Etruria. 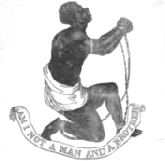 xxxxxAs we shall see, Wedgwood also played an important part in social reform. In 1787, together with Granville Sharp and the English cleric Thomas Clarkson, he formed a society for the abolition of the slave trade. It was this society which, using William Wilberforce as their spokesman in parliament, succeeded in persuading the then prime minister, William Pitt, to set up an investigation into the slave trade. Illustrated here is the society's seal, designed and made by Wedgwood. It reads: "Am I not a man and a brother?"

xxxxxFollowing the death of Wedgwood in 1795, the business continued to thrive, despite growing competition as time went by. In the early years of the 19th century, for example, the company supplied a 1,300 piece dinner service to the White House during the presidency of Theodore Roosevelt. In 1940, during the Second World War, Etruria was finally closed down and a modern factory opened at Barlaston, Staffordshire.

xxxxxWellxworthy of mention is Wedgwood’s able business partner Thomas Bentley (1730-1780) (illustrated). They met in 1762, and went into partnership six years later. Bentley worked as the company's London agent, but he also played an important part in ensuring that the quality of material and the elegance of design were maintained in all branches of production. He numbered among his friends the scientists Benjamin Franklin and Joseph Priestley, and the naturalist Joseph Banks.

xxxxxIncidentally, when Wedgwood was in his early teens he lost his right leg as a result of catching smallpox. This is one of the reasons - perhaps the major reason - why, unable to take an active part in the work of the business, he concentrated his efforts on research and experiments and, as a consequence, jumped so far ahead of his competitors. ......

xxxxx…… The famous English naturalist Charles Darwin was the grandson of Josiah Wedgwood. His mother, Susannah Wedgwood was the daughter of the pottery designer and manufacturer. 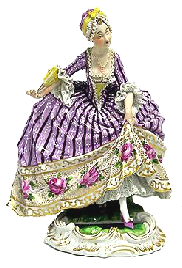 xxxxxAs noted above, one of the European pottery manufacturers which was keenly affected by the competition from Etruria was the French ceramic industry at Sèvres in south-west Paris. This industry was first established at a porcelain factory at Vincennes in 1738, but when the king gave it royal status a new factory was built at Sèvres in 1756, close to the chateau of its principal patron Madame de Pompadour. By this time, the soft-paste then used in production had been perfected, some of the best work being in "biscuit ware", a white marble-like substance mostly used for figure modelling. As we have seen, François Boucher was one of a number of contemporary artists brought in to work on the designs. He produced figures or groups of figures, together with an abundance of little cupids and nymphs, often nude or scantily clothed. Also produced were large, presentation vases - luxuriously gilded - and smaller vessels, generally adorned with flowers, exotic birds, or pastoral and mythological scenes. As one might expect, among the wide range of background colours available were rose Pompadour (Pompadour pink) and bleu de roi. (King's blue). 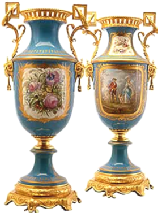 xxxxxThe king took over the factory in 1759, and two years later the secret of making hard paste porcelain (porcelaine royale) was discovered, or rather bought. However, it was not used extensively until the early 1770s, when the required raw material was found nearer home in the Périogord district. Some of the dinner services at this time were decorated with birds copied from the book The Natural History of Birds, the outstanding work by the French naturalist George Buffon. Fashionable too was porcelain in the distinctive styles of Louis XV and XVI, but with the coming of the French Revolution the industry was badly hit, and the factory struggled to survive. However, the 19th century saw a number of technical innovations, together with the introduction of a better quality hard paste, and this brought about a marked recovery, led by the Neo-classical and Egyptian themes of the Napoleonic era.

xxxxxOne of the leading pottery manufacturers which suffered from Wedgwood competition was the Sèvres works in Paris. This industry was first established at Vincennes in 1738 and moved to Sèvres in 1756, by which time the soft-paste used had been perfected. Biscuit ware was used for figure modelling, together with vases and vessels decorated with flowers, exotic birds and idyllic scenes. François Boucher was among the artists providing the designs. Hard paste was not in general use until the 1770s.Then porcelain was made in the distinctive styles of Louis XV and XVI, and bird designs were adopted from The Natural History of Birds, the work by the naturalist George Buffon. The industry was badly hit by the French Revolution, but made a remarkable recovery in the 19th century. Other French factories at this time were at Chantilly, Mennecy and Limoges. In England, Chelsea, Worcester and Derby were the main centres, followed by the makes known as Spode and Doulton in the early 1800s.

xxxxxOther French factories at this time were located at Chantilly, Mennecy and Limoges - which became a branch of the Sèvres industry in 1784. Meanwhile in England, Chelsea, Worcester and Derby were centres of excellence in the porcelain industry. The Spode factory was established at Stoke-on-Trent in 1770, and specialised in Chinese designs, but, like Doulton ware, did not become well known until the 19th century.

xxxxxIncidentally, you may remember that a work by the 17th century Dutch artist Jacob Van Ruisdael entitled Le Coup de Soleil was used by the Sèvres factory around 1836 as a motif on some of its porcelain. The painting shows a burst of sunlight breaking through the clouds and illuminating the river below.