xxxxxThe Italian artist Paolo Veronese spent most of his life in Venice, where his grand interiors were rich in colour and spacious in design, admirably depicting the city’s pomp and splendour - as in his Triumph of Venice. His paintings, generally religious, historical or mythological in theme, were noted for their complex classical settings and skilful foreshortening, seen to stunning effect in the ceilings in the Doge’s Palace and in his extensive work for the church of San Sebastiano. He produced a large number of altarpieces and devotional paintings for local churches and monasteries, including his vast masterpiece Marriage at Cana for the church of San Giorgia Maggiore. Among the many figures depicted in this work are many notables of the time, including Francis I and the emperor Charles V. From 1579 he worked closely with the city’s prominent artist Tintoretto, restoring work damaged by a fire in the Doge’s Palace. Among those artists influenced by his work were Tiepolo, Rubens and, later, Van Dyke and Delacroix. 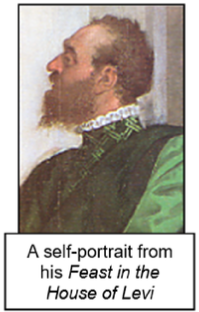 xxxxxThe Italian artist Paolo Veronese was born in Verona, hence his name, but he spent many years of his life in Venice, arriving there in 1553. Here, he mainly confined his work to large, decorative schemes depicting the pomp and splendour of the city, to be seen at its most extravagant in his Triumph of Venice. His painted interiors, generally of religious, historical or mythological subjects, were very rich in colour, spacious in design and noted for their complex classical settings and skilful foreshortening. This style is seen to stunning effect in his decoration of the ceilings in the Doge's Palace, and in his many canvases in the church of San Sebastiano, where he and members of his studio worked for some ten years. He also executed a series of supper scenes, altarpieces and devotional paintings for monasteries and churches in and around the city. 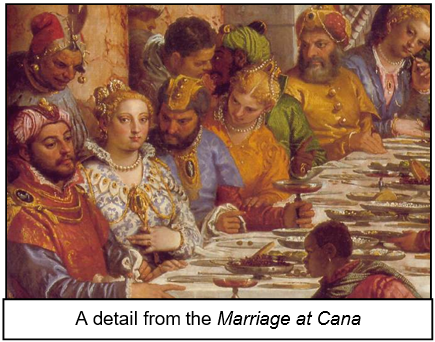 xxxxxOf particular interest is his vast masterpiece Marriage at Cana, completed in 1563 for the church of San Giorgia Maggiore but now in the Louvre, Paris. Sumptuous and grand in its architectural setting - doubtless the influence of Palladio - it contains more than a hundred figures, many of whom are notables of the time. Among these are the monarchs Francis I and Charles V, the writer Pietro Aretino, and two fellow painters Titian and Tintoretto. And important too in showing his remarkable ability to integrate painting and architecture in classical style, is his interior decoration of the Villa Barbaro, designed by Palladio at Maser, north-west of Venice.

xxxxxIn 1573, his version of the Last Supper (illustrated below) landed him in trouble. It was deemed irreverent, and he was hauled up in front of the Inquisition. Exception was taken to the inclusion in the scene of "drunkards, dwarfs and dogs". Veronese argued that he was just a painter and his work aimed at praising God in light and colour. He did not give thought to the subject matter. There was a space so he filled it with some figures! A compromise was reached

. The title of the work was changed to The Feast in the House of Levi! This episode just about sums up his attitude to art. In this and in many of his earlier works Veronese was concerned not so much with the theme of the painting as with the grandeur of the setting, the nuances of colour and texture, the intrusion of light, and the challenge of unusual perspective. This said, a serious commitment to his subject is to be seen in such works as his moonlit Pietà and his Crucifixion, where the theme does take centre stage.

xxxxxIt was in December 1577 that a fire badly damaged the Doge's Palace, destroying many of the private and public rooms. Once the building had been renovated, Veronese was appointed to restore the interior decoration, alongside his close friend and admirer, the prominent Venetian artist Jacopo Tintoretto. Beginning in 1579, they worked together for some years, replacing works they had painted earlier for the palace. His Paradise, left unfinished at his death, was completed by Tintoretto.

xxxxxVeronese died of a fever in 1588 and his brother Benedetto and his sons Carlo and Gabriele, all members of his workshop, had him buried in the church of San Sebastiano with a bust to mark his grave. His work, powerful in colour and theatrical splendour, was much admired in his day. Among those who were to find inspiration from his individual style was the Italian rococo artist Giovanni Battista Tiepolo and, to a lesser extent, the Flemish baroque master Peter Paul Rubens. Later the Flemish painter Van Dyck and the French artist Delacroix were influenced by his work as a colourist. Illustrated here are his Christ with the Woman of Samaria, and Venus and Adonis.

xxxxxIncidentally, it appears that, after his death, his obvious delight in painting splendid banqueting scenes was confirmed in writing! A note written on the back of one of his drawings reads:

If ever I have time, I will represent a sumptuous repast in a superb gallery at which the Virgin, the Saviour, and Joseph shall be present, served by the richest cortege of angels that it is possible to imagine, who shall offer to them, on plates of silver and gold, the most exquisite viands, and an abundance of superb fruits. Others shall be occupied in presenting to them, in transparent crystal and gold cups, precious liqueurs, to show the zeal with which happy spirits serve their Lord.