xxxxxCharles I, a firm believer in the Divine Right of Kings and in favour of the High Church of England, was soon in trouble with Parliament. Its members refused to grant him money and, in March 1628, when the country was at war with both France and Spain, they accused him of illegal taxation and drew up a Petition of Rights. This claimed that there could be no taxation without the consent of Parliament, and no imprisonment without just cause. Eventually in March 1629 the king dismissed Parliament and took over the government of the country. The years that followed came to be known as the Eleven Years’ Tyranny but, in fact, with the end of the war with France and Spain, trade flourished and the nation prospered. Nonetheless he was still short of funds, and his tax, the so-called Ship Money, brought widespread opposition. Then in 1637 when he decided to impose a new church liturgy in Scotland, based on the English Book of Common Prayer, he found himself fighting the First of the Bishops’ Wars. To meet the cost Charles was obliged to recall Parliament and this put him at the mercy of its members.

xxxxxAs his father had warned him, from the very beginning of his reign Charles had trouble with Parliament. Apart from his belief in the Divine Right of Kings, his sympathies lay with the High Church of England whereas the majority of Parliamentarians were Puritans, with no time for the prayer book, rule by bishops, or elaborate ritual in the conduct of services. The first parliament, called in June 1625, also opposed the continuation in office of the Duke of Buckingham, a man already distrusted for his influence over James I.  As a consequence the Commons refused to grant the king the right to levy customs duties, a lucrative source of income and one which had been granted to his predecessors for life. 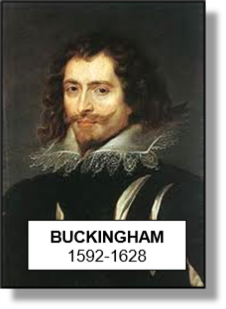 xxxxxThe second parliament of February 1626 lasted about four months. Alarmed at Buckingham's disastrous failure in his attack upon the Spanish port of Cadiz, its members attempted to put him on trial for treason. Charles would have none of it, and parliament was dissolved. By the time his third parliament assembled in March 1628, called to provide much-needed funds, the causes of friction between Monarch and the Commons had further increased. The country was now at war with both Spain and France - a very costly burden - and the king had alienated his judges by dismissing the chief justice and arresting some 70 persons who had refused to pay his enforced loans. These acts of illegal imprisonment and taxation were roundly condemned, and Parliament then set out its grievances in its Petition of Rights. It was a formidable document, but the king had to consent to it in order to receive financial support. By it, there were to be no taxes without the consent of Parliament; no imprisonment without cause; no arbitrary quartering of soldiers on his subjects; and no martial law in peacetime.

xxxxxThe fourth parliament was convened in January 1629, and the wrangling continued. Its members renewed their protests against the king, objecting to the revival of "popish practices" in the Church of England (the Queen was a Roman Catholic), and once again condemning illegal taxation - this time the levying of customs duties without parliamentary consent. By this time Charles had had enough. In March he adjourned the assembly, an adjournment which was destined to last eleven years. But this parliament ended on an ominous note. Before it broke up, the speaker (chairman) was forcibly held down in his chair and three resolutions were passed protesting against the king's conduct. It was an ominous note that was one day to be echoed by a bugle call to arms. 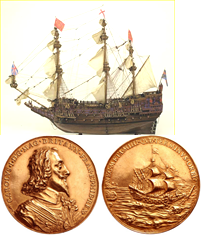 xxxxxSurprisingly enough, the "Eleven Years' Tyranny" which followed were comparatively successful as far as the country was concerned.  Charles made peace with France and Spain, and the country's expanding trade substantially boosted his income from customs duties. He even tried to economise in the matter of court expenditure. But not all was sweet and light. He ran foul of public opinion in 1634 with his introduction of "ship money" to pay for the cost of the Royal Navy. Levied first on ports and then later on inland towns, it aroused widespread opposition, led by the prominent member of Parliament John Hampden. In 1638 the judges serving in the Court of the Exchequer supported the Crown, but the majority was so narrow that the protest continued unabated. Furthermore, the increasing role being played in the affairs of state by the king's wife, the Roman Catholic Henrietta Maria - especially since the assassination of Buckingham in 1628 - aroused suspicion in the minds of the public in general and the Puritans in particular.

xxxxxBut, as we shall see, this somewhat benevolent dictatorship - it is said that he saw himself as "an indulgent nursing father" - began to feel the strain in 1637. In that year Charles decided to impose a new church liturgy, based on the English Book of Common Prayer, on his northern kingdom of Scotland. The Scottish Presbyterians, in no way prepared to accept elements of popery - particularly bishops - rose up in arms in what came to be known as the Bishops' Wars. The expense of this conflict was to force the king back into the arms of Parliament. Its members were not likely to be merciful!