xxxxxWith the emergence of the German Empire following the defeat of the Austrians in 1866 (Vb) and the French in 1870 (Vb), the balance of power in Europe changed dramatically. In 1872, as we have seen, The Three Emperors’ League (Germany, Austria-Hungary and Russia) was formed against the growth of liberalism, but this virtually collapsed in 1878 (Vb) when, at the Congress of Berlin, both Germany and Austria-Hungary supported the reduction of Russian claims in the Balkans, made at the end of the Russo-Turkish War. The alliance between Germany and Austria-Hungary remained, however, and in 1882 Italy joined this pact and formed the Triple Alliance. This powerful bloc in central Europe left both Russia and France isolated, and, as we shall see, these two nations, by necessity rather than choice, formed a military alliance in 1894.

Map (Europe): released into the public domain by its author Nydas – https://commons.wikimedia.org/wiki/File:Triple 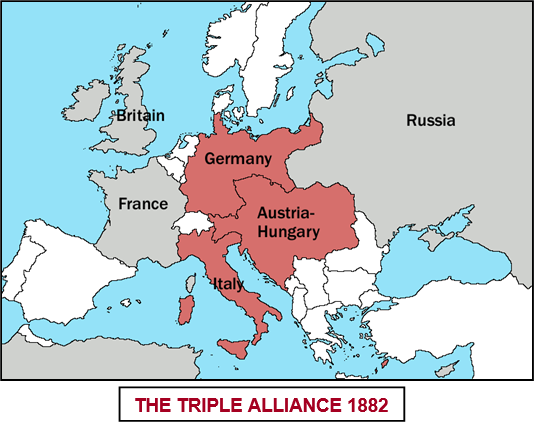 xxxxxAs we have seen, the German victories over the Austrians in 1866 (Vb) and the French in 1870 (Vb) - wars engineered by the Prussian Chancellor Otto von Bismarck - destroyed the balance of power that had been established by the Congress of Vienna some fifty years earlier. With the establishment of a powerful German Empire in 1871, dominating central Europe, new power blocs were soon to emerge. Indeed, within the space of a year The Three Emperors’ League, was formed, an alliance of Germany, Russia and the new Austria-Hungary, created specifically to stop the growth of republicanism and socialism on the continent.

xxxxxBut this League, allied though it was against liberalism, did not last long. From its beginning there was serious tension between Austria-Hungary and Russia over the future of the Balkans. In effect, Russia’s aims to unite the Slavic peoples in this area and increase their influence threatened the very existence of the Dual Monarchy. Then, with the coming of the Russian-Turkish War in 1878, the League collapsed. When the fighting came to an end, the Russian terms imposed at the Treaty of San Stefano, giving Russia virtual control over large parts of the Balkans, was opposed by both of her so-called allies, Austria-Hungary and Germany. Both feared the spread of Slav nationalism. As a consequence, at the Berlin Congress of 1878 (Vb), chaired by Bismarck himself, Russian influence in this area was drastically reduced. This international settlement humiliated Russia and, not surprisingly, brought about the virtual collapse of the Three Emperors League. The following year, however, Bismarck, still wary of Russian intentions, and fearing that one day France would seek revenge for their catastrophic defeat, formed a secret defence pact - the Dual Alliance - with Austria-Hungary. 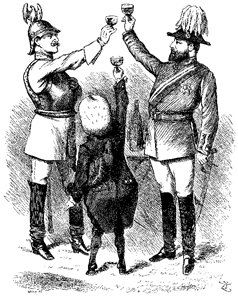 xxxxxIt was this pact that Italy joined in 1882, thereby forming the Triple Alliance. Fearing France - its major rival in the Mediterranean -, and particularly angered by the French occupation of Tunisia that year - a potential colony to which it had laid claim - the Italian government was anxious to procure a defensive, non-aggressive alliance which would guarantee the support of both Germany and Austria-Hungary in the event of a French attack. But the fledgling state of Italy was weak militarily and something of an outsider - as the cartoon shows. Furthermore, it was a rival to Austria-Hungary in the Adriatic and both countries had outstanding territorial claims, notably over the province of Trentino and the peninsula of Istria. As a consequence both Germany and Austria-Hungary had reservations concerning the strength of Italy’s commitment to the alliance, and with the coming of the First World War (1914-1918) these proved to be well founded.

xxxxxIn 1882, however, the Triple Alliance was seen as a formidable central European bloc, made up of a powerful, ambitious Germany, a revitalised Austria-Hungary with command over the Balkans, and an Italy which, whilst weaker than its allies, had its shores lapped by the Mediterranean, the gateway to Africa. And by splitting the continent down the middle, this pact left two of Europe’s major powers isolated: Russia in the east and France in the West. It is perhaps not surprising that, as we shall see, it was these two nations which - by necessity rather than choice - formed a military alliance in 1894 and paved the way for the Triple Entente.