xxxxxWork on the building of the White Tower was begun by order of William I in 1075. Made from French limestone, it has remained the centre of the fortress despite a number of extensions. Built to guard the port of London, access is mainly from the Thames, via Traitors' Gate. Many accused of treason were imprisoned and then executed here, inside the fort or on Tower Hill. There are twelve inner towers, the most famous one being the Bloody Tower where the two young princes were probably murdered in 1483. Over the years the fortress has been a royal residence, a prison, and a centre for housing the royal mint and public records. The crown jewels and regalia are on display here, and the "Yeomen Warders" or "Beefeaters", still wear Tudor style uniform. 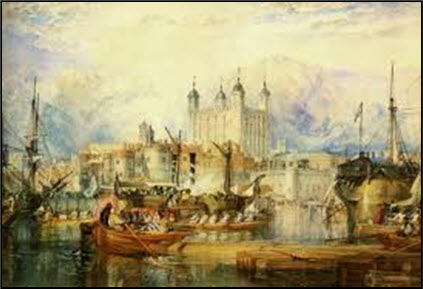 xxxxxWork on the building of the keep, or White Tower, of the present-day Tower of London was begun by order of William the Conqueror around 1075. It was built by Gundulf, Bishop of Rochester, in order to control the bustling, trading community alongside the Thames, and, at the same time, guard the entrance to the Pool of London, the major port area at this time.

xxxxxThis very English, London landmark is, in fact, made from French limestone, imported from Caen in the Duchy of Normandy. It was erected just inside the old Roman wall which once surrounded the city, and, despite extensions in the 12th and 13th centuries, has remained the centre of this imposing fortress. There is only one entrance from the land, access being mainly from the Thames, then a major highway. The gate on the river under St. Thomas' tower is popularly known as Traitor's Gate because for many years the tower was used as a prison, particularly for those persons accused of plotting against the state. Executions were held here, either inside the fortress on Tower Green or outside in public on Tower Hill.

xxxxxThe inner fortifications contain twelve towers. Among these are the Bloody Tower, so called because this is where the two young brothers, king Edward V and Richard, were thought to have been murdered in 1483; the Devereux Tower, named after its most famous prisoner, Robert Devereux, Earl of Essex, executed for treason in 1601; and the Jewel Tower, one time housing the royal regalia.

xxxxxThis fortress was a royal residence until the 17th century and, over the years, it has housed the Royal Mint and public records, and been used as an ordnance store. The ceremonial guards, the Yeomen Warders, or "Beefeaters" as they are popularly called, still wear a Tudor style uniform and live within the Tower. The crown jewels and regalia are on display here, now on view in a specially designed showcase in the Jewel House. 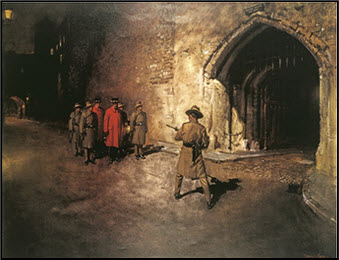 xxxxxIncidentally, Edward III, apart from greatly extending the fortress, instituted the famous Ceremony of the Keys which takes place at the Tower every evening throughout the year. Edward returned to the fortress unexpectedly one day in 1340 and found the doors unlocked and unguarded. Since that time the chief warder, defended by armed guards, has had the nightly duty of doing the rounds of the fortress in order to make sure that all the doors are secure. Today, this is the longest continuous ceremony in the world. During the Second World War (1939-1945) the timing of the ceremony went adrift when bombs were dropped nearby and the warder and his guards were knocked off their feet. They recovered, however, and completed their duty. The incident was reported to the then monarch, George VI, who decided that the members of security party should not be reprimanded because their lateness had been due to "enemy action"!

xxxxxThe warders acquired the nickname "Beefeaters" in 1669, when Cosimo de Medici, the grand duke of Tuscany, on a visit to London, described them as "great eaters of beef"

xxxxxLegend has it, probably from the time of Charles II, that if the ravens which live around the Tower were ever to leave the fortress, disaster would befall Great Britain. As a result, at least six ravens are now kept in the Tower and they have an officer of the Crown to feed and protect them!

xxxxxHaving much in common with Roman architecture, the Romanesque style or "Norman style" was first introduced into England by Edward the Confessor. Its major characteristics are round arches, massive cylindrical columns, and thick walls. Windows and doors were small and rounded at the top. Work on Canterbury Cathedral was started at this time, and two other great Romanesque cathedrals are Norwich and Winchester. On the continent, a fine example of this style is the Basilica at Cluny in east central France, the largest church in Christendom at this time. 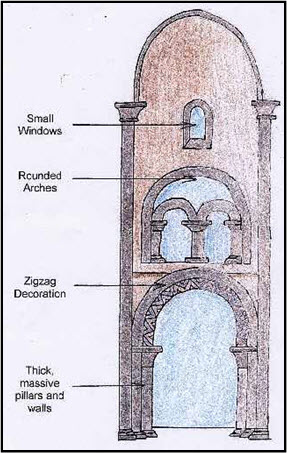 xxxxxOften referred to as Norman, the Romanesque style was first introduced into England by Edward the Confessor. The rebuilding of the abbey of Westminster, started in his reign, is a prime example. As the name implies, this style had much in common with the building techniques of the Romans, and it was used extensively in the construction of castles, cathedrals, abbeys, monasteries and parish churches throughout their new domain.

xxxxxThe style roughly spanned the years from 1066 to 1200 and, in a couple of words, was both massive and round. Great cylindrical columns and thick walls provided the dead weight necessary to withstand the sideways thrust of the rounded arches. The roof was generally of timber, boarding being used to cover over the roof trusses and make a tunnel-shaped ceiling. Later, stone roofs were made for the main parts of the building to cut down the risk of fire. The windows and doors were small and rounded at the top, the pointed arch not coming into use until late in the period. Stained glass was also late in the making and, when it came, was confined to the windows of the cathedrals and larger churches. Very little of this 12th century glass has survived. The oldest stained glass in Britain is to be found in the choir of Canterbury Cathedral. This early glass was very thick, and its rich, deep colours greatly reduced the light inside the building. 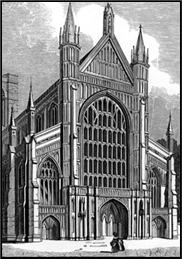 xxxxxWork on Canterbury Cathedral and the abbey-church of Bury St. Edmunds was begun in this period, as was the combined castle and cathedral at Durham, a gigantic fortress to defend and control the northern area. The two other great Romanesque cathedrals are Norwich and Winchester (illustrated). On the continent notable buildings in this style are the abbey church at Rheims and the Basilica of St. Peter and St. Paul at Cluny in east central France, the largest church in the world until the building of St. Peter's in Rome. In England, as elsewhere, a notable feature of this style - and one which has moved away from the Roman classical design - is the carved capitals, often taking the form of monsters, demons and dragons and doubtless depicting the inhabitants of Hell.