xxxxxAs we have seen (1523 H8), the Italian artist Titian was the greatest painter of the Venetian school, noted for his portraits as well as for his vast number of religious and mythological works. In style, he owed much to Giorgione, especially in the harmony of his composition and the depth and richness of his colours. To this period belongs his famous equestrian portrait of Charles V - masterly executed and emphasising, as intended, his power and authority -, and his full length portrait of Philip II. He returned to Venice in about 1550 and it was here that he produced a large number of brilliant mythological paintings, including his Danaë series, Diana and Actaeon, and Venus and Adonis, completed in 1554. Among his religious works were his Crucifixion, Christ Crowned with Thorns, and his Entombment, a scene full of pathos and mysticism. He died in 1576, a victim of the plague. His work had a profound effect upon El Greco and many later artists, including Rubens, Velasquez, Poussin, Rembrandt and Delacroix. 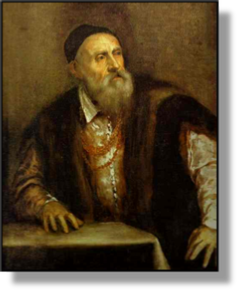 xxxxxAs we have seen (1523 H8), the Italian artist Titian (born Tiziano Vecellio) was one of the most outstanding and influential painters of the High Renaissance, and the greatest of the Venetian school. He gained particular fame for his vast number of religious and mythological works, but he was also a talented portrait painter, and served in the courts of both the Holy Roman Emperor, Charles V, and his son Philip II of Spain. As a result, his services were in constant demand, be it for portraiture, biblical themes, or "poetical compositions", as he called his mythological scenes.

xxxxxHe was greatly influenced by Giorgione and it was to him he owed his early idyllic style and, perhaps more importantly, his brush technique, a skill which he developed further over his long career and which gave his work that 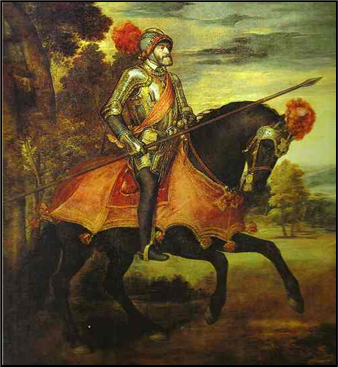 distinctive depth and richness of colour. And to this sumptuous colouring he added a harmony of composition and an atmospheric use of light, all of which made him the most famous artist of his day. Included in his early works, produced mainly in Venice, are those with a religious theme, such as Salome, Sacred and Profane Love, Christ before Pilate, and the monumental and magnificent The Assumption of the Virgin. Others are based on myth and legend like Bacchanal of the Andrians, the Worship of Venus and Bacchus and Ariadne, wherein sensuous female nudes show the influence of his master, Giovanni Bellini. His early portraits included those of the Emperor and of a number of local aristocrats, all eager to be portrayed by so distinguished an artist. Also belonging to this period were two keenly observed family groups, the Vendramin Family and Pope Paul III and his Grandsons.

xxxxxIn 1548, he was invited to Augsburg by Charles V where he executed his now famous portrait of the Emperor on horseback (illustrated above). Here, like his portraits of many notables at this time, his aim was not to provide an insight into the man himself, but to emphasise the power, dignity and authority of the great office he held. The painting is remarkable for the mastery of its execution - note in particular his rendering of the armour, and the sunset landscape beyond. This work became the prototype of equestrian portraiture for many years to come. His full-length portrayal of Phillip II, surly and arrogant, does reveal character, however, as does his Self-Portrait, completed around 1560. In the latter, dignified in tone, he wears the gold chain of knighthood, an honour bestowed upon him in 1533 by his admirer and close friend, Charles V. (See portrait above.)

xxxxxOn returning to Venice in about 1550 - where he stayed for the remainder of his life - he produced a number of brilliant mythological paintings for Philip II, wherein his use of colour and light - always intense - became even more pronounced. This tended to soften form, as can be seen in his Danaë series, his Diana and Actaeon, and his Venus and Adonis (illustrated centre below), completed in 1554. And this innovation can also be seen in his religious works of this later period, notably in his Entombment (illustrated left below), where the subject shimmers in a golden and red light, adding to the pathos and mysticism of the scene. And mention must also be made of his Christ Crowned with Thorns, his Crucifixion, and his Ecce Homo (illustrated right below). 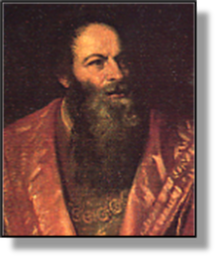 xxxxxAmong Titian's close friends was the poet and playwright Pietro Aretino (1492-1556). He first met Titian in Venice in 1527 and, via his contacts and writings, did much to make the artist well known throughout Europe. He may well have been instrumental in introducing him to Charles V when he was at Bologna in 1529, and it is known that he sold many of Titian's paintings to Francis I, King of France. Aretino's fame rests mainly on the large number of letters he wrote, many to Titian, but he was a controversial figure and called himself "the scourge of princes" because of his habit of launching cynical and abusive attacks upon the powerful. It was said at the time that he knew better than any other how to "defame, threaten and flatter", and thus his services were sought by those in high office, including the Emperor and the king of France, on the principle that it was wiser to have him on your side than against you! Titian painted his portrait in about 1545 and, by all accounts, he later complained that the work had not been finished. In the detail shown here, he is wearing a heavy gold chain, a gift from Francis I. 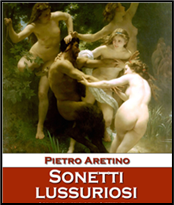 xxxxxHe was born at Arezzo (hence his adopted name), and settled in Rome in 1517. In 1525, however, following the publication of his Lewd Sonnets (Sonetti Lussuriosi), complete with explicit engravings, he was obliged to leave the Holy City. He later got his own back in two works, Ragionamenti and Dialoghi, in which he took delight in revealing the vice and corruption within Rome, and the moral failings of some of the city's leading figures! He wrote five comedies about lower-class life - The Courtesan being the best known - and he also produced one tragedy called Orazia, a work of some merit.

xxxxxThe poet and playwright Pietro Aretino (1492-1556) was a close friend of Titian. He introduced him to Charles V, and he sold many of his paintings to Francis I of France. And through his writings he made Titian well known throughout Europe. Aretino is best known for the large number of letters he wrote - many to Titian - and for his cynical and abusive attacks upon the powerful. His ability to "defame, threaten and flatter" earned him the title "the scourge of princes". Titian painted his portrait around 1545.

xxxxxA highly successful and wealthy artist, Titian died in 1576, together with his son and assistant Orazio, both victims of the plague which was then raging through Venice. He was buried in the city's famous church of Saint Maria de Frari, where his huge and magnificent altarpiece, the Assumption of the Virgin, adequately testified to his greatness as a painter and his contribution to the field of visual art. His long and prolific career, rich as it was in artistic achievement and encompassing all aspects of the painter's art, had a profound effect upon El Greco, and many artists yet to come, including Rubens, Velasquez, Poussin, Rembrandt and Delacroix.