xxxxxIt was said that the Venetian painter Jacopo Tintoretto had the colour sense of Titian, his master, and Michelangelo’s skill as a draughtsman. But he also brought a great deal of vigour and energy to his work, intensified by a flickering, unearthly light. His workshop produced a large number of religious works and portraits. His major project were the paintings for the interior of the Scuola di San Rocco in Venice, 56 huge dramatic works which included his Crucifixion, The Ascent to Calvary and The Ascension. From 1579 onwards he worked for some years with his colleague Veronese, restoring all the works damaged by fire at the Doge’s Palace, and on the death of his friend he completed his vast rendering of Paradise. Special mention must be made of his Saint George and the Dragon, The Last Supper, and his Portrait of an Elderly Senator, painted in 1580. 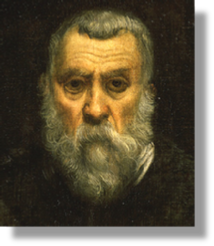 xxxxxJacopo Tintoretto was born in Venice and was the son of a dyer, hence his adopted name "little dyer". He studied very briefly under the great Venetian artist Titian - with whom he didn't get on - and was greatly influenced by the works of Michelangelo. His biographer, Carlo Ridolfi, writes of his having Titian's sense of colour and Michelangelo's skill as a draughtsman. This is clearly the case, but, by the use of broad, rapid, brush strokes he also brought a great deal of vigour and intensity to his scenes. Indeed, it was this feeling of turbulent activity, together with a flickering, unearthly light over the entire canvas, which set him apart from his contemporaries and made him a somewhat controversial figure. We are told that in order to perfect his work, he used to make small wax models and arrange them on a box. He was then able to use candles to light the "scene" from various angles, moving the figures to produce the required effect.

xxxxxHis workshop produced a vast number of religious paintings and some very fine portraits (like the self-portrait illustrated above). One of his major projects, begun in 1564, was the decoration of the interior of the Scuola di San Rocco in Venice. The 56 huge paintings involved were not fully completed until 1586, and remain today as a monument to his industry and remarkable skill. Here are to be found his highly dramatic Crucifixion and The Ascent to Calvary (detail illustrated below), both works very characteristic of his style. Other works in this series are Moses Striking the Rock and The Ascension, both overwhelming in their rich colour, energy and illumination. Among his mythological paintings are Bacchus and Ariadne and The Origin of the Milky Way. The latter work, considered the finest of his allegories, and his famous St. George and the Dragon, can be seen in the National Gallery in London - and are illustrated in part below.

xxxxxIt was in December 1577 that a fire badly damaged the Doge's Palace, destroying many of the private and public rooms. Once the building had been renovated, Tintoretto was appointed to restore the interior decoration, alongside his fellow artist and close friend Paolo Veronese. Starting in 1579, they worked together for some years, replacing works they had painted earlier for the palace. 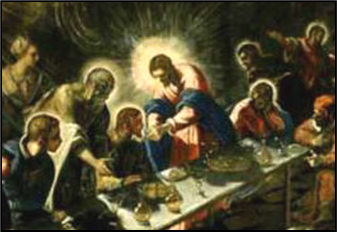 xxxxxOn the death of his friend in 1588, Tintoretto took on the mighty task of completing his gigantic rendering of Paradise, begun in the Great Council Chamber in the recently-restored Doge's Palace. Even with much help from apprentices and his talented children, Dominico and Marietta, it took four years to complete. It is an impressive work, but its main claim to fame is that it is the largest single canvas in the world. Perhaps his greatest painting was also his last: The Last Supper, produced for the church of San Giorgio Maggiore. Seen from above, the composition, the colour and, perhaps most of all, his spectacular use of light, must make this one of the finest interpretations of this Christian event (detail illustrated here).

xxxxxA highly talented portraitist, among those who sat for him was the Doge Alvise Mocenigo, Vincenzo Morosini (now in the National Gallery), and Jacopo Sansovino (illustrated below), the foremost sculptor and architect working in Venice at this time. Mention must also be made of his Portrait of an Elderly Senator, painted in 1580. This is a particularly fine piece of work.

xxxxxIn 1590 Tintoretto suffered the tragic loss of his only daughter Marietta at the age of 34. A valuable assistant in his workshop and on location (when she would dress as a boy), she was an accomplished artist in her own right. He was grief stricken, and never recovered from her death. After the long and bitter winter of 1593, he died at the end of May in his home at the Palazzo del Cammello. Tintoretto was buried in the church of Madonna dell' Orto, next to his beloved Marietta. A man of immense energy and rare talent, his proud nature and pushy ways did not make him a host of friends. It is known that Titian disliked him. But his influence lived on in the baroque style of the Flemish master Rubens and the Carracci family and, more immediately, in the work of El Greco.

xxxxxIncidentally, the commission for his major project, the decoration of the entire interior of the Scuola di San Rocco, was obtained by a mixture of admirable initiative and downright impudence. The leading Venetian artists being required to submit preliminary sketches for the painting of a particular ceiling, Tintoretto found out the exact measurements of the panel, completed the painting, and put it into place the day before the competition was to be judged! He then had the nerve to announce to the astonished members of the Scuola that the painting was a gift and that, according to their rules, they were not able to refuse it! Needless to say, his fellow artists were not amused by this clever ruse, but it got him the commission and a period of lucrative employment which lasted, off and on, for some twenty years. 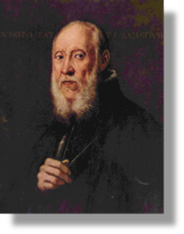 xxxxxTintoretto painted this fine portrait of his friend Jacopo Sansovino around about 1564. An Italian sculptor and architect, Sansovino (1486-1570) was employed by Pope Julius II as a restorer of antiquities, but when Rome was sacked by the Spanish in 1527, he fled to Venice and worked for the Republic. He designed 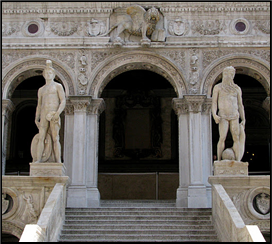 churches, palaces and public buildings for the city. His masterpiece was undoubtedly the highly decorative Library of San Marco, begun in 1536. Unfortunately the roof of this building collapsed in 1545, and for this error he was thrown into prison for a while. He was eventually released through the good offices of his friends, Titian and the writer Aretino. He came to fame as a sculptor by his superb copy of the antique statue of Laocoon, but he is probably best remembered today for his huge sculptures of Mars and Neptune, installed at the entrance to the Doge's Palace in 1557.