xxxxxFollowing the capture of Jerusalem by Saladin in 1187 (H2), Pope Gregory VIII launched the third Crusade. Among those who answered the call in 1189 were the kings of France, Germany and England. It looked promising but, unfortunately, national rivalries were to get in the way. The German expedition went overland to Asia Minor, but broke up when their emperor, the aged Frederick Barbarossa, was drowned crossing a river. The French and English went by sea but, having taken Acre, the two kings - each suspicious of the other - had a bitter dispute over tactics, and Philip Augustus took his army back to France. Richard I captured Jaffa but, lacking the strength to take on Saladin alone, he too turned for home after gaining some concessions for the Christians - a strip of land along the coast and a safe passage for pilgrims going to Jerusalem. The only other positive achievements were the capture of Cyprus - taken by Richard on his outward journey - and the formation of the Teutonic Knights, formed by the Germans at Acre in 1190. As we shall see, it was not to be the last of the Crusades, but the next one, launched in 1202 (JO), was to be a disaster as well as a failure.

xxxxxThe massive assault upon the Holy Land by Saladin, the Sultan of Egypt, culminating in the capture of Jerusalem in October 1187 (H2), was met with anger and concern in the courts of Europe. The pope, Urban III, died on hearing the news - so some would have it - and it was left to his successor, Gregory VIII, to issue the Crusade Bull in 1189. No time was lost in mounting new expeditions, the three with the greatest promise being those led by Philip Augustus of France, Emperor Frederick Barbarossa of Germany, and Richard I of England. All three left in 1190.

xxxxxThe German expedition chose to go over land and made good progress, but on reaching Asia Minor the aged Emperor was drowned while crossing a river. Without his firm leadership the army disintegrated. Some men deserted, others were killed, and some were captured and sold into slavery. Meanwhile, the English and French went by sea to Acre where Richard played a prominent part in the capture of the city. At this stage, however, the bitter differences between the French and English kings came to a head. As rivals in Europe, both were suspicious of each other and, whilst Richard was an enthusiastic crusader, the French king was more anxious about the state of his homeland than the fate of the Holy Land. He decided to take his army back to France. 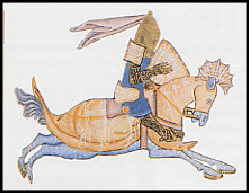 xxxxxRichard the Lionheart soldiered on and, having defeated the Muslims at Arsuf and captured the port of Jaffa, he marched to within sight of the Holy City. But further conquest proved impossible and discretion proved the better part of valour. Realising that he had no hope of recapturing Jerusalem, he came to terms with Saladin - a man he had come to admire for his honesty and humanity - and returned to Europe. It was a sad ending to such a gallant venture, but a measure of success had been achieved. By his agreement with the Sultan of Egypt, the crusaders were allowed to keep control of the coast from Tyre to Jaffa, and Christian pilgrims were guaranteed safe passage to visit the Holy Places.

xxxxxAnd this crusade had another important "spin-off", not fully appreciated at the time, namely the capture of Cyprus. Richard had visited the island on his outward journey. Here he had defeated the Byzantine ruler Isaac Comnenus and gone on to conquer the entire island. Situated as it was close to the Holy Land, the island became important not only as an outpost of the coastal strip which made up the Latin States, but also as a supply base for future crusades.

xxxxxThe Third Crusade had all the hallmarks of success, made up as it was of three European armies and led by their monarchs. But despite its size and the quality of its leadership, national rivalries got in the way. As a result there was never a common purpose, a sense of unity, or a combined strategy. All three would have been necessary to take on and defeat a Muslim army which was so large, so committed, and so well led. Thus, despite further crusades, the Holy City of Jerusalem remained in the hands of the "infidel" until the First World War over 700 years later. And, as we shall see, the next Crusade, launched in 1202 (JO), did not go further than Constantinople, and ended up by sacking that city!

xxxxAs mentioned earlier (1113 H1), it was during this crusade that the religious military order of the Teutonic Knights was formed. It was established at Acre in 1190 by the German Crusaders, its full title being the Teutonic Knights of Saint Mary's Hospital at Jerusalem. Recognised by the pope in 1199, membership was restricted to German nobles, but followed the same format as that of the Knights Templars and the Knights of Saint John of Jerusalem. Despite its origin, much of its work was carried out in eastern Europe, mainly due to the influence of its grand master Hermann von Salza. In this area, the Order carved out for itself a sizeable piece of real estate, but as we shall see, its forces were defeated at the Battle of Tannenburg in 1410 (H4), and never recovered their military power. Eventually, the movement was dissolved by Napoleon in 1809, but was fully restored in 1929 as a charitable and nursing order - and as such it exists today.