xxxxxMaria Theresa succeeded her father, Emperor Charles VI, in 1740, and was at once called upon to defend her throne. She lost Silesia to the Prussians but, this apart, she bravely held on to her domains during the War of the Austrian Succession, despite attacks from a number of states, including France. Determined to recover Silesia, she then reversed Austria's traditional foreign policy and allied with the French, hoping to isolate Prussia. This she virtually achieved, but when the Seven Years War broke out in 1756, the Prussians, under Frederick the Great, fought a good fight. Although coming close to defeat in 1761, they eventually succeeded in forcing Austria to the peace table and, by the Treaty of Paris in 1763, held on to Silesia. From this time onwards, ruling with her son Joseph, Maria Theresa pursued a peace policy, introducing a sweeping programme of reforms to unite and strengthen her diverse empire. These included the building of an efficient army, and improvements in education, agriculture and the law system. But she was certainly no supporter of the Enlightenment. Intolerant and autocratic, these reforms were simply practical changes for the good of the state. And for the same reason, she took measures to reduce the power of the nobility, and to make the church subservient to her secular authority. But it was not all domestic affairs during these later years. Joseph took part in the infamous First Partition of Poland in 1772 (G3a) - much against his mother's pious nature - and seized Galicea as a result. Then later, in 1778, he tried to benefit from the War of the Bavarian Succession but, following the intervention of Prussia, had to be content with just a small district in the disputed territory. When her reign came to an end in 1780, however, Maria Theresa, one of the most ablest of Habsburg rulers, had achieved a great deal in retaining and rebuilding her empire, thereby ensuring that it had a continuing role in the affairs of Europe. 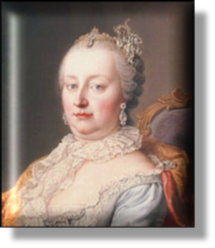 xxxxxAs we have seen, in 1740 Maria Theresa succeeded her father, the Holy Roman Emperor Charles VI, as Archduchess of Austria and Queen of Hungary and Bohemia. Despite earlier undertakings by all the major states to accept her as the rightful successor (including Prussia and France), her title to these lands was at once challenged by Bavaria, Saxony and Spain, and both France and Sardinia joined the coalition. All were anxious to grab a slice of the Habsburg cake.

xxxxxBut it was Frederick II of Prussia who opened the conflict - which came to be known as the War of the Austrian Succession. Anxious to put his large and efficient army to good use, in 1740 he seized the wealthy province of Silesia. Maria Theresa gained the support of the British and the Hanovarians, but was faced with a formidable coalition ranged against her. Undeterred, she refused to surrender and, rallying public support from all quarters of her realm, went on the offensive. She was obliged to come to terms with Prussia, but, she drove the French and Bavarians out of Bohemia and, exploiting the divisions amongst her remaining enemies, avoided a major confrontation. In 1745 the French overran the Austrian Netherlands, but by the peace treaty of Aix-la-Chapelle in 1748, all her lands were restored to her save for Silesia and some small possessions in Italy. Furthermore, her husband, Francis I, was confirmed as the Holy Roman Emperor.

xxxxxHaving saved her nation by her courage and diplomatic skill, she now put in motion a plan to recover the prosperous province of Silesia. Assisted by her able advisor Wenzel Anton von Kaunitz, she reversed her country's traditional foreign policy by what came to be known as the "Diplomatic Revolution". She abandoned Great Britain, her old ally and "banker", and allied Austria with France and Russia. As she had hoped, this pact was joined by Saxony and Sweden, both concerned at the growing might of Prussia. Isolated save for the support of the British and Hanovarians, Frederick II reckoned that attack was the best form of defence. In 1756 he invaded Saxony and, over the next seven years - the Seven Years’ War - fought a series of running battles on a number of fronts. 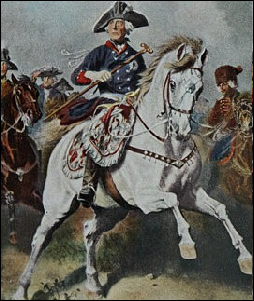 xxxxxFrederick (illustrated) was highly successful in the opening stages of the struggle, gaining victories over the French and Russians in 1757, and, in the same year, stopping the Austrians' advance into Silesia by roundly defeating them at the battle of Leuthen. But two years later the odds against him began to tell, and he was fighting for survival. In 1759 the Austrians and Russians defeated him at the battles of Kay and Kundersdorf, and by October the following year he had lost eastern Prussia, and Russian and imperial troops were in Berlin. It seemed that Maria Theresa was about to regain Silesia. But it was not to be. The death of the Empress of Russia, Elizabeth Petrovna, in January 1762 brought Peter III to the throne, and he quickly took Russia out of the war. Meanwhile the British and Hanovarians were now beginning to keep the French in check. Austria, now virtually alone and fast running out of money, was compelled to make a peace settlement. By the Treaty of Paris in 1763, Silesia remained in the hands of the Prussians.

xxxxxThe war having been lost, over the next seventeen years, - until her death in fact - Maria Theresa sought peace in order to restore her empire's fortunes. Following the death of her husband in 1765, however, she shared the government with her son Joseph, (the future Joseph II) and, as a result, there were some territorial gains during this period. As we shall see, in 1772 (G3a), for example, Austria, in collusion with Prussia and Russia, took part in the First Partition of Poland and, as a consequence, acquired the region of Galicia. Maria Theresa, a devout, pious person, was appalled by this underhanded agreement, but it was pushed through by Joseph and Kaunitz. Likewise in 1777, she was literally dragged into the War of the Bavarian Succession. Following a dispute over rights to this kingdom, Joseph laid claim to Lower Bavaria and occupied the region. This brought Prussian troops into action, and a full-scale war was only avoided by personal correspondence between Maria Theresa and Frederick the Great. As a result, Austria had to be satisfied with just a small district within the disputed territory. 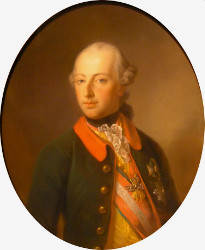 xxxxxIn home affairs, at least, Maria Theresa continued to call the tune, though she and her son were often at loggerheads. Together, they introduced an ambitious programme of reform in education, agriculture and the law, as well as providing a modest system of relief for the poor. For her part, however, these were practical improvements for the good of the state, not measures based on some enlightened philosophy. Indeed, as an absolute monarch, holding office as a trust from God, her greatest contribution lay in the steps she took to accumulate greater central control over her unwieldy empire. She built up her army, cut back on the privileges of the nobility, and subordinated the church to the authority of the state. It was to be left to Joseph, her successor, (illustrated) to embrace the woolly ideas of the Enlightenment.

xxxxxAs a ruler she was intolerant and autocratic, but she was certainly not lacking in courage and determination. Furthermore, she was a good judge of character, and this enabled her to appoint able ministers to advise her during a long and often troubled reign. She must be seen as one of the most capable of the Habsburg rulers. She managed to keep the empire substantially intact during two major conflicts, and then did much to unify what was, in fact, a disparate collection of states. She was mother to no less than 16 children, ten of whom survived into adulthood. Included in these were two emperors, Joseph II and Leopo 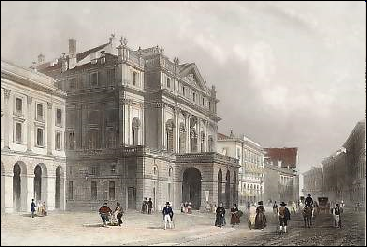 ld II, and the ill-fated Marie Antoinette, who became queen of France after her marriage to the dauphin in 1770 - later Louis XVI.

xxxxxIncidentally, although not particularly well known for her patronage of the arts, in 1754 Maria Theresa appointed the German composer Christopher Gluck, as director of opera at her court theatre. She later received the Mozarts, and was responsible for the building of Milan's famous opera house, La Scala, opened in 1778.