xxxxxThe Normans landed at Pevensey Bay in Kent in 1066. King Harold, having won the battle of Stamford Bridge, near York, against the Norwegian King Hardrada, hurried south, assembled a force of some 9,000 men, and met up with William's army about six miles inland from Hastings, Sussex. The Normans depended mainly on archers and heavy cavalry, whilst the English fought mainly on foot. From their vantage point on Sandlake Hill the English at first repulsed the Norman attacks, but when part of the French force feigned retreat, many of the English left their commanding position and, in pursuing the enemy, were cut down by the French cavalry. A final attack upon the depleted English infantry brought the battle to an end. Amid a hail of arrows, Harold and his two brothers were killed, and his army was virtually destroyed. Battle Abbey was founded by the Conqueror to commemorate the Norman victory, a victory which changed the course of English history. 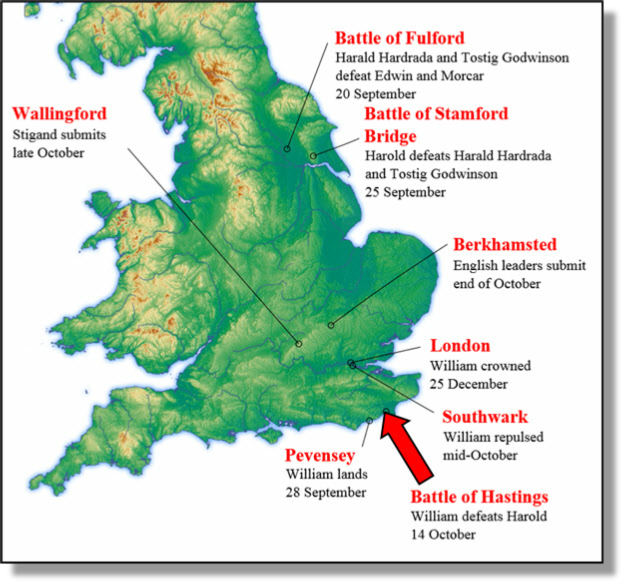 xxxxxThe battle took place on the 14th October 1066, following the landing of the Normans at Pevensey Bay in Sussex. The site of the battle is marked by Battle Abbey, about six miles inland from Hastings at a place called Senlac. Harold, having defeated the Norwegian King Harald Hardrada at the Battle of Stamford Bridge, near York, just three weeks earlier, hurried southwards and, mustering a force of some 9,000 men near London, marched the 58 miles south to take on the invader.

xxxxxThe Normans, numbering about 7,000, depended mainly upon archers supported by heavily-armoured cavalry, whilst the English fought mostly on foot, armed with lances, pikes and battleaxes. For a time the English, holding the high ground on Sandlake Hill and standing shoulder to shoulder, repulsed the French attacks. Among their number were the famous Housecarles, a body of well-trained infantry. Then William ordered part of his force to feign retreat. Many of the English broke rank and ran down the hill in hot pursuit, only to be cut down by the French cavalry. Meanwhile a force of cavalry and foot soldiers, kept in reserve, attacked the depleted English forces on the height. Amid a hail of arrows, Harold and his two brothers were killed, and his army was almost totally destroyed. The next day William made for London … and his coronation.

xxxxxThe Battle of Hastings was a victory for the Normans but it might not have been so. If, (one of the most tantalising “ifs” in history), the English king, having won the battle of Stamford Bridge, had rested his tired troops, if only for a few days, and then taken on reinforcements on reaching London, then the Normans - unable to bring up reserves - might have been overwhelmed as they made their way inland. As it was, he left much of his army up north, and, returning to London, gathered what forces were quickly available. This left him short of cavalry and archers, and many of his men had seen little if any active service. 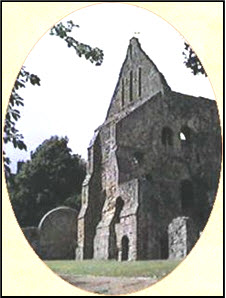 xxxxxBattle Abbey (illustrated) was founded by William the Conqueror in 1070 for the salvation of his soul. It was badly damaged during the dissolution of the monasteries in the reign of Henry VIII in the 16th century, but the remains of the building can be seen today. It is situated in the town of Battle, so named to commemorate the Norman victory.

xxxxxIncidentally, there is a little church in Tasmania, Australia (the Church of St. John the Baptist in the parish of Buckland) which claims to have a stained glass window which was originally in Battle Abbey. The story goes that, during the time of Oliver Cromwell, the window was taken out and buried for safekeeping. Parts of it were damaged in the process and when it was eventually dug up it was bought by the first Rector of Buckland, the Reverend F.H. Cox, who was visiting England at that time. It has been established that parts of the window date from the fourteenth century so this could well be a genuine claim.