xxxxxAlfred Tennyson, one of the great English poets, is remembered above all for the musical quality of his verse, his rich imagery, and his precise mastery of language. Among his major works were The Lady of Shalott and The Lotus Eaters of 1833, the elegies contained in his In Memoriam of 1850, his famous The Charge of the Light Brigade in 1854, and his The Idylls of the King, a long series of poems based on the Arthurian legends and first published in 1859. Among his shorter poems which have stood the test of time are his Crossing the Bar, Break, Break, Break, and Flower in the Crannied Wall. A sensitive man by nature, he was deeply affected by the death of his friend Arthur Hallam in 1833, and published little over the next ten years. During this period, however, he wrote The Two Voices and In Memoriam, works in which he pondered over life and death, and explored in depth his own inner feelings about social and moral issues, and the threat posed to Christianity by the advance of science. He gained fame with his poems of 1842, which included Morte d’Arthur, and his publication of In Memoriam in 1850 led to his appointment as poet laureate. By the time he had completed his The Idylls of the King in 1885 he was a much admired literary figure, respected not only for the quality of his poetry, but also for his genuine concern for the future of mankind. He was made a peer of the realm in 1884. 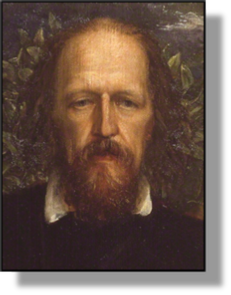 xxxxxAlfred Tennyson, one of the greatest names in English literature, gained his reputation as a poet by the splendid musical quality of his verse and his precise mastery of language. Few poets have been his equal in either of these skills. His works, many based on legend or history, included The Lady of Shalott and The Lotus Eaters of 1833, Ulysses in 1842, the elegies contained in his In Memoriam of 1850, his famous The Charge of the Light Brigade in 1854, and his The Idylls of the King, a long series of poems based on the Arthurian legends, first published in 1859. A man of compassion who became immensely popular with the public in his later years, he was appointed poet laureate in 1850 (succeeding William Wordsworth), and made a peer of the realm in 1884.

xxxxxHe was born in Somersby, Lincolnshire, the precocious son of the local Rector, and was producing verse in the style of Lord Byron, Alexander Pope and Walter Scott long before he reached his teens. He was sent with two of his brothers to Louth Grammar school in 1815 and, by all accounts, spent five unhappy years there, a fact that might well account for his sensitive nature and his tendency to suffer periods of depression. Hexwent up to Trinity College, Cambridge in 1827 where he won the chancellor’s gold medal for a poem entitled Timbuctoo, and became a close friend of Arthur Hallam (1811-1833), a fellow student. He visited Europe with him in 1830, and took part in the unsuccessful revolution to overthrow Ferdinand II of Spain, though neither saw any action. 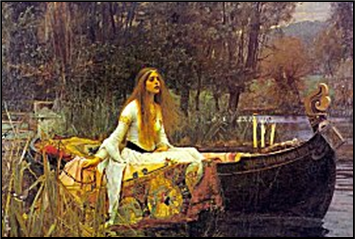 xxxxxSome of his boyhood poetry was published in his Poems by Two Brothers in 1827, and he first showed promise of his poetic talent in his Poems Chiefly Lyrical, produced in 1830. There followed his volume of poems in 1832, which included The Lady of Shalott (illustrated), the Miller’s Daughter and The Lotus Eaters, but an accompanying satirical piece on the critic Christopher North resulted in a highly unfavourable appraisal in the Quarterly Review, and this led to a somewhat muted appreciation of his works by the general public. And matters grew worse the following year with the untimely death of his friend Arthur Hallam, aged 22. This plunged Tennyson into a period of deep despair, and for the next ten years he published little, spending his time writing and in meditation. To this period belongs his The Two Voices, written in 1834, a troubled work centred around death and immortality, and a sequence of elegies which, published later under the title In Memoriam, explored in depth his own inner feelings about life and death.

xxxxxIn the early 1840s Tennyson’s fortunes took a decided turn for the better. His two-volume Poems of 1842, which included Morte d’Arthur and the moving poem Break, Break Break, brought him recognition and fame, and his long epic poem The Princess, concerned with the question of women’s rights (and not without a touch of humour), contained some of his finest lyrics and proved highly popular. And it was during this period, while living in London, that he was granted a pension by the prime minister of the day, Sir Robert Peel, and mixed with the likes of the historian Thomas Carlyle, the poets of  the  Pre-Raphaelite Brotherhood, and the politician William Ewart Gladstone. 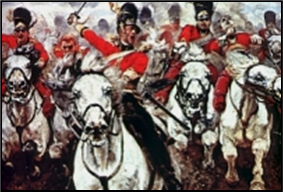 xxxxxIn 1850, the year in which he published his highly successful In Memoriam  - a vast poem of some 130 pieces which was much 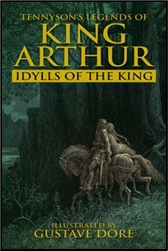 admired by Queen Victoria  -, he was appointed poet laureate, and it was in this official capacity that he produced his Ode on the Death of the Duke of Wellington and his rousing The Charge of the Light Brigade, published in his Maud and other Poems of 1855. Four years later came one of his major undertakings, The Idylls of the King, a series of twelve poems which, full of medieval pageantry and noble characters, traced the Arthurian legends to the very downfall of the mythical kingdom. Composed over thirty years, they proved immensely popular, and added to his celebrity status.

xxxxxHis later works, which included the historical dramas Queen Mary, Harold and Becket, and the moving poem Crossing the Bar, - composed during a crossing to the Isle of Wight - added to the width of his accomplishments, but also brought a return to despondency. His poem Despair of 1881 and, a year later, his play The Promise of May, revealed his troubled concern over religious and moral matters of his day - fuelled by Darwin’s theory of evolution - , though his The Ancient Sage, published in 1885, did take a more optimistic view of man’s worth and destiny.

xxxxxTennyson married Emily Sarah Sellwood in 1850 and it proved a happy marriage. They lived for a time in Twickenham, near London, and then for some sixteen years had a house at Farringford, near Freshwater on the Isle of Wight. In 1869 they made their home at Aldworth, near Haselmere, Surrey, and it was there that he died in 1892, a much loved and respected literary figure. 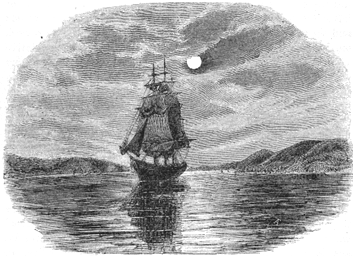 xxxxxIt must be said that, at times, Tennyson’s poetry may be seen as stilted and over-ornate, but it contains some of the richest idyllic verse in the English language, remarkable above all for its rhythmic beauty, descriptive imagery, and exquisite choice of word and phrase. In addition, many of his poems - and particularly his In Memoriam - were the product of a sensitive, caring nature, and an often troubled mind. More than any poet before him, he voiced in depth the hopes, doubts and the fears of humanity, be it those of the past or those of his own day. Little wonder that he came to be seen as a figure of order and harmony in an age when the traditional Christian and moral values were being undermined by the growth of materialism and the advance of science. Much of the subject matter of his poems may well have lost its appeal over the years, but works like the awe-inspiring Break, Break, Break, Crossing the Bar (illustrated), and Flower in the Crannied Wall, will for ever be remembered, as will the majesty and beauty of many of his lines.

xxxxxGiven below are just a few of these memorable lines, together with two verses of his evocative poem Crossing the Bar, a tranquil acceptance of the approach of death.

In which it seemed always afternoon.

Come into the garden, Maud,

For the black bat, night, has flown.

For men may come and men may go,

But I go on for ever.

In the Spring a young man’s fancy

Lightly turns to thoughts of love.

Kind hearts are more than coronets,

And simple faith than Norman blood.

Their’s not to make reply,

Their’s not to reason why,

Their’s but to do and die:

And after that the dark!

And may there be no sadness of farewell,

For though from out our bourne of Time and Place

The flood may bear me far,

I hope to see my Pilot face to face

When I have crossed the bar. 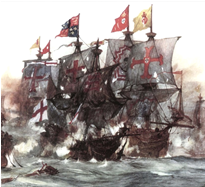 xxxxxIncidentally, Tennyson’s poem The Revenge is based on the fight that was put up by Sir Richard Grenville (1542-1591), the English commander of the Revenge, when in 1591 his ship was surrounded by a large force of Spanish galleons. He refused to surrender and fought for fifteen hours before his ship was captured. He was wounded during the fighting, and died aboard the Spanish flagship. ……

xxxxx……  The Arthurian legend was a highly popular subject with the Pre-Raphaelite Brotherhood. The 1857 edition of Tennyson’s works, for example, had illustrations by both William Holman Hunt and Dante Gabriel Rossetti. In fact, Tennyson was not particularly pleased with either of them! 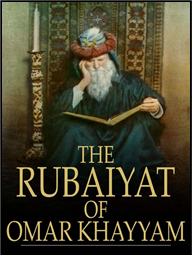 xxxxxThe English poet and translator Edward Fitzgerald (1809-1883) was up at Cambridge at the same time as Tennyson and Makepeace Thackeray, and both became lifelong friends. In 1859 he produced his brilliant poetic version of the Rubaiyat (or quatrains) of Omar Khayyam, a Persian poet of the 12th century. Written in a series of four-line verses, this poem ponders on the mysteries and uncertainties of life and death. Fitzgerald’s free adaptation went virtually unnoticed when first published, but it was later discovered by the English poets Dante Gabriel Rossetti and Algernon Swinburne, and is now admired throughout the English-speaking world for its beauty of word and thought.

xxxxxIncidentally, FitzGerald (or “Old Fitz” as he was known) lived most of his life in Suffolk. He was buried in the churchyard of St. Michael and All Angels near his family’s former estate at Boulge. A clipping from a rose that grew on the tomb of Omar Khayyam in Nishapur, Persia (now Iran) was planted alongside his grave in 1893.

The Moving Finger writes; and, having writ,

Moves on: nor all thy Piety nor Wit

Shall lure it back to cancel half a Line,

Nor all thy Tears wash out a Word of it.

The Charge of the Light Brigade