xxxxxTemur, the grandson of Kublai Khan (1274), came to power in China in 1294. He managed - with difficulty - to keep control of his vast lands, but with his death in 1307 his empire began to disintegrate, hit by revolts and widespread flooding and famine. Within sixty years Mongol rule was at an end. Meanwhile a similar decline had set-in in the other Mongol areas of Turkestan and Iran. Even the Golden Horde, once a threat to Western Europe, was becoming a spent force. As a first step, as we shall see, it was soundly defeated by the Russians in 1380 (R2), and this was to be followed by an even greater humiliation one hundred years later. 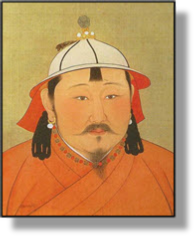 xxxxxIn 1294, Temur, the grandson of Kublai Khan (1274), succeeded him as the Emperor of China. He also regarded himself as the Great Khan of the Mongol Empire, but his influence outside of China was pretty limited. In China itself he maintained order, crushing rebellions in Korea and South China, but he was the last of the Yuan (or Mongol) dynasty to have any real control over this huge empire. Indeed, the fact that he had to deal with internal rebellions and, moreover, that he gained a reputation for his tough fight against large-scale corruption, is evidence enough that there were troubles ahead.

xxxxxWith the death of Temur (illustrated) in 1307, the empire began to disintegrate. The Emperors that followed were more interested in the flesh-pots of the Chinese court than the sound administration of their vast territories. Severe flooding of the Yellow River and widespread famine in the north, for example, brought chaos and deprivation, but the government took no steps to deal with these disasters. Before long a number of Chinese leaders, alarmed at the collapse of state control, established their own regional authorities, enforcing their rule by raising their 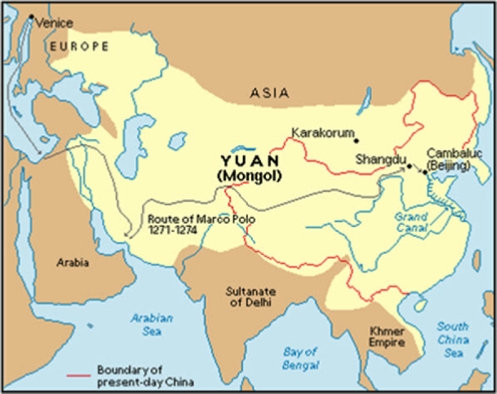 own private armies. Sixty years after Temur’s death the Mongol rule in China was virtually at an end.

xxxxxNor was this decline in Mongol power confined to China. Over the same period the Khans of Turkestan began to lose their grip over their Muslim subjects, whilst in Iran (a much bigger area than it is today) the administration began to break down, resulting in the loss of central control. Even in the Empire of the Golden Horde, which, at one time, had threatened the states of Western Europe, the writing was on the wall. Stretching across much of southern Russia, it was destined to become a spent force and, as we shall see, to suffer a humiliating defeat at the hands of the Russians in 1380 (R2). Then, exactly one hundred years later Ivan the Great refused to pay tribute to his Mongol overlords and repulsed their forces. By then, a new nation was in the making where once the Mongols had ruled supreme.