xxxxxIn 1767 the British government, anxious to reduce its financial burden, imposed import duties on a number of essential items arriving in the American colonies, such as paper, glass and tea. As in the case of the Stamp Act of 1765, this caused widespread rebellion and, as we have seen, led to the “Boston Massacre” of 1770. This violent act, in which five citizens were killed by British troops, united the colonies in their opposition to the import duties, and Britain was obliged to withdraw them. It kept the tax on tea, however, and this led to the protest known as the “Boston Tea Party”. In December 1773 some sixty colonists, disguised as Mohawk Indians, boarded three ships in Boston harbour, and threw overboard a huge cargo of tea - some 340 chests. Spurred on by King George, the British government reacted harshly, tightening its grip on Massachusetts and closing down the port of Boston. The colonies responded by convening the First Continental Congress. This asked for a redress of its grievances, and when this petition was turned down the two sides drifted into war. By the time the Second Congress was held in May the following year, the first shots, as we shall see, had been fired at Lexington in April 1775. The American War of Independence - known in the colonies as the American Revolution - had begun. 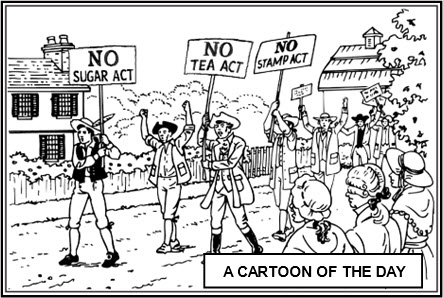 XxxxxBritain’s troubles with her American colonies began in 1765, just two years after the Treaty of Paris which ended the Seven Years’ War. The Stamp Act of that year, taxing the American colonies to help pay for their defence, caused widespread rioting. The tax, imposed by the British parliament on all publications and legal documents, was strongly opposed on the grounds that no government had the right to tax a people who were not represented within that governing body. So widespread and severe was this protest that the following year the British government felt obliged to repeal the Act.

xxxxxHowever, two years later, determined to reduce its financial burden, parliament introduced a number of “external customs duties” on a wide range of essential imports, such as paper, paint, glass and tea. Once again violent protests broke out across the colonies and, as we have seen, these came to a head in the so-called Boston Massacre of 1770. In this incident, British troops opened fire on a crowd of protesters, killing five civilians. Aware of the widespread outrage this caused, and hoping to prevent any further violence, the government at once repealed all the duties except the one on tea, hoping thereby to stop the violence spreading. 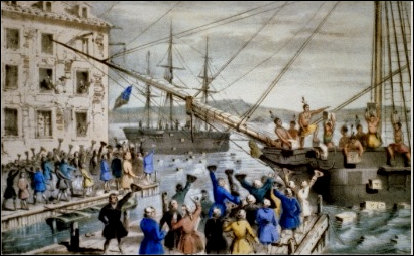 xxxxxIt hoped in vain. In 1773, some 60 colonists in Boston, Massachusetts - the major centre of protest - took direct action against the one remaining import tax, that on tea (retained to allow the East Indian Company to offload its surplus stock). In December of that year a valuable consignment of the company’s tea had arrived in the harbour, carried aboard three vessels and valued at about £15,000. Onxthe night of the 16th, thinly disguised as Mohawk Indians, a band of colonists (organised by the politician Samuel Adams (1722-1803) and including the folk hero Paul Revere) boarded all three vessels and dumped the entire consignment overboard - a total of 342 chests. A large crowd of Bostonians turned up to applaud their efforts. As the political philosopher John Adams later observed: by now “revolution was in the minds and hearts of the people”.

xxxxxThis flagrant act of defiance, which came to be known as the “Boston Tea Party”, outraged King George III. He demanded that parliament take drastic action against Massachusetts and the “rebels”. In March the following year Lord North’s government passed the Coercive Acts, a number of punitive measures designed to bring the colonists to heel. Known in North America as the “Intolerable Acts”, they permitted the billeting of soldiers in the homes of the colonists, moved the capital from Boston to Salem, and closed the port of Boston itself - a serious blow to the well-being of the city - until payment had been made for the destroyed tea. And to this list was added the Quebec Act, passed in 1774. This not only recognised Roman Catholicism for the French inhabitants of Canada - an alarming development for the protestants of New England - but it also extended the boundaries of Quebec as far south as the River Ohio, encompassing an area long seen by the American colonists as their rightful inheritance. 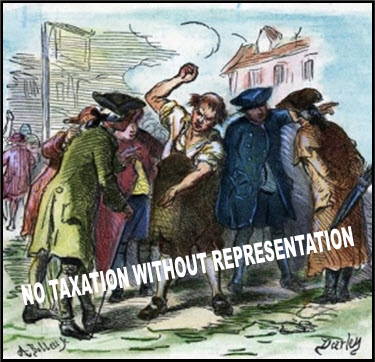 xxxxxFor the colonists these harsh measures, following on from the Boston Massacre, proved the last straw. Amid widespread indignation and resentment, Virginia convened a protest meeting. In September 1774 some 50 representatives from all the colonies except Georgia met at Philadelphia to attend the First Continental Congress. This called for civil disobedience against British authority, drew up a Declaration of Rights and Grievances, and appealed directly to King George for fair treatment. At this stage, independence from Britain was explicitly rejected. The Congress sought only a restoration of harmony between Britain and the colonies, but all this changed when parliament rejected its petition. Then the drift to war became inevitable. Indeed, by the time the Congress held its second meeting in May 1775 the armed conflict had already begun, and there was open talk of the colonies as “free and independent states”. As we shall see, the opening shots in the American War of Independence - known by the colonists as the “American Revolution” - were fired at Lexington in April 1775.

xxxxxWhilst British public opinion was outraged by the Boston Tea Party, there were those inside and outside of parliament who took a more conciliatory attitude towards the colonists. This viewpoint was ably voiced by the politician Edmund Burke, later renowned for his writings on the French Revolution. In two speeches in the House of Commons, 1774 and 1775, he took the British government to task for its intransigence. The revolt of a whole people, he argued, clearly indicated a serious misunderstanding of the problem by those responsible for government. Imperial rights had to be tempered by the economic and political needs of the colonists themselves. Only by taking these into account would the colonies’ confidence in the mother country be restored. This advice, sound though it might be, came too late to stop the slide into conflict, though it is most unlikely that it would have been acted upon had it come earlier. The nature of imperial authority required a much longer time scale in which to change.

xxxxxIncidentally, during the “tea party” some of the tea which was dumped in the harbour was washed up on the shore. A quantity of the leaves were picked up and preserved, and these can be seen today in Boston Museum! 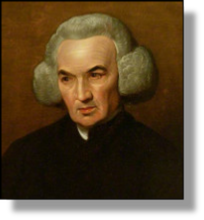 xxxxxAnd powerful support for the colonial cause came in 1776 with the publication of the pamphlet. Observations on Civil Liberty, the Principles of Government, and the Justice and Policy of the War with America. The work of the Welsh preacher and political and moral philosopher Richard Price (1723-1791), it proved enormously popular. A vast number of copies were sold throughout Britain and North America, he was granted the freedom of the city of London on the strength of it, and two years later the U.S. Congress invited him to advise on financial matters - an appointment he declined. And later, in 1789, it was a sermon that he preached in praise of the popular movement emerging in France that incited Edmund Burke’s famous denunciation of the French Revolution the following year.

xxxxxPrice was born in Tynton, Glamorgan, the son of a Congregational Minister. He attended a Dissenting (Non-conformist) Academy in London and, after serving as a chaplain in Stoke Newington in the north of the city, became minister of the nearby Newington Green Unitarian Church in 1758. It was here, following his pamphlet of 1776, that his powerful support for republican and liberal causes brought him 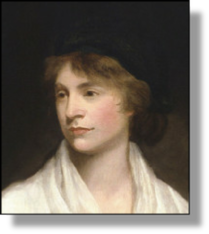 instant fame. He preached to crowded congregations, and he was visited by some of the most important statesmen and academics of the day. These included the prime minister himself, William Pitt, the American founding fathers Benjamin Franklin, Thomas Jefferson and Thomas Paine, the philosophers David Hume and Adam Smith, the scientist Joseph Priestley, and the agitator for prison reform John Howard. Price also influenced the writings of the feminist Mary Wollstoncraft (illustrated), one-time working as a young school teacher in Newington Green. She later extended his ideas on egalitarianism to include her fight for the rights of women.

xxxxxAmong other works published by Price were The Review of the Principal Questions in Morals of 1757 (containing his theory of ethics), An Appeal to the Public on the Subject of the National Debt, and An Essay on the Population of England. His Essay towards Solving a Problem in the Doctrine of Chances - based on a work by his clergyman friend Thomas Bayes - gained him admittance to the Royal Society in 1765. In 1781 he received the degree of Doctor of Laws from Yale College.