xxxxxAs we have seen, it was in 1606 (J1) that the Spanish explorer Luis Vaez de Torres sailed between New Guinea and Australia, and the Dutchman Willem Jansz explored the western side of the Cape York peninsula. In 1642 another Dutch navigator, Abel Tasman, travelled along the southern coast of Australia, though he didn’t sight land until he reached Tasmania. He named it Van Diemen's Land and then, travelling further east, he landed on the southern island of New Zealand before going on to discover the islands of Tonga and Fiji. In a second expedition, two years later, he explored the north coast of Australia and discovered the Gulf of Carpentaria. His voyages likely proved that the great “South Land” (Australia) was, indeed, a vast island. Later Van Diemen’s Land and the sea in this area were named after him. 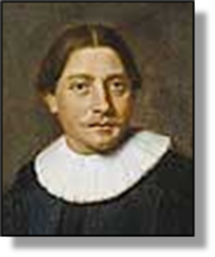 xxxxxAs we have seen, it was in the year 1606 (J1) that the Spanish explorer Luis Vaez de Torres sailed through the stretch of water which lies between New Guinea and Australia (the strait that now bears his name), and the Dutchman Willem Jansz reached the western side of the Cape York peninsula. In the years that followed a number of vessels, sailing from the Cape of Good Hope to Java, were carried too far east by the trade winds and sighted and landed on the western coast of Australia. It was not until the early 1640s, however, that an attempt was made to define the southern limits of this huge territory, vaguely described as "the great known South Land”

xxxxxThe Dutch navigator Abel Tasman was born in Lutjegast, and entered the service of the Dutch East India Company some time around 1632. Having taken part in a number of trading voyages, including visits to Formosa, Japan and Cambodia, he was chosen by Anton Van Diemen, the governor-general of the company, to lead a voyage of exploration deep into the southern hemisphere in search of a sea passage to Chile. 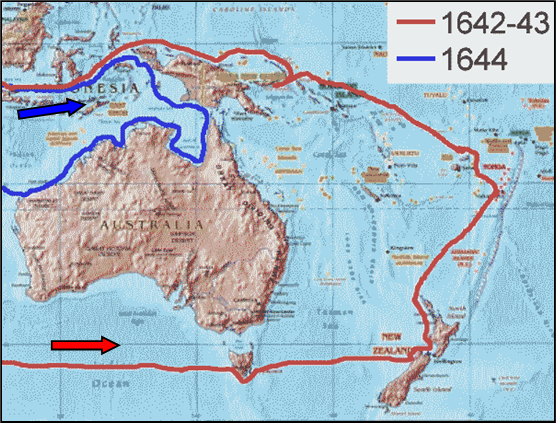 xxxxxIn 1642 he left Batavia (now Jakarta on the island of Java) with two ships. He travelled westward to Mauritius and then after sailing south beyond the normal trade routes, he turned eastwards. This took him south of the southern coast of present-day Australia, but he did not sight land until he reached Tasmania. The first European to discover this island, (though he didn't know that it was an island at the time), he named it Van Diemen's Land, in honour of his superior. He then continued eastward and sighted a larger island (the South Island of New Zealand). He sailed north along its west coast and anchored in today's Golden Bay on the north coast. Here he encountered hostile Maori tribesmen and lives were lost. He left without delay, naming the inlet "Murderers' Bay", and, passing by the strait between the South and North Island, sailed north-east and discovered the islands of Tonga and Fiji ... and more friendly natives. 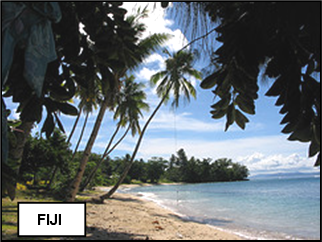 xxxxxHis ten-month voyage had likely proved that "the great known South Land" was a vast island, but many questions remained unanswered. A second expedition, two years later (1644), took him into the Torres Strait, and it was there that he discovered the Gulf of Carpentaria and sailed along the north coast as far west as Exmouth Gulf. To the authorities his voyages had proved somewhat disappointing, particularly in their failure to find sources of potential wealth. After this he commanded a trading visit to Siam, and he took part in a war against the Spanish in the Philippines, but he retired a few years later.

xxxxxIn recognition of his discoveries, the part of the South Pacific Ocean lying between Australia and the islands of Tasmania and New Zealand was later named after him (the Tasman Sea), as was the island he discovered and named Van Diemen's Land. This territory became a British possession at the beginning of the 19th century - later used as a penal settlement - and in 1856, after the colony had been granted its own government, it was renamed Tasmania. 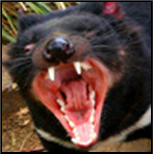 xxxxxIncidentally, Tasmania is now the only place where one can find the Tasmanian Devil in the wild, usually in remote rocky regions. A small but ferocious marsupial, their jaws and teeth are extremely powerful and they live off small animals and carrion, feeding by night. With their coarse, brown and black coat, streaked with white, and their large head, beady eyes, and menacing snarl, they certainly deserve their popular title.

xxxxxAs governor general of the Dutch East India Company, Anton van Diemen was based at Batavia  from 1636 to 1645. Here he did much to strengthen the Dutch hold on Far Eastern trade, securing the spice monopoly and expanding the company’s holdings. He seized Malacca from the Portuguese, drove the Spanish out of Formosa, set up trading posts in Ceylon and India, and managed to keep a presence in Japan. His support of exploration greatly increased man’s current knowledge of Australasia. 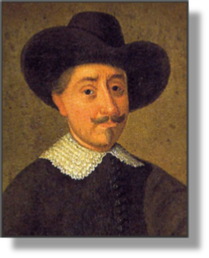 xxxxxAnton van Diemen was governor general of the Dutch East India Company from 1636 to 1645, based at Batavia. During his term of office he secured the spice monopoly throughout South East Asia, and strengthened the Dutch hold on Far Eastern trade. In the space of nine years he seized Malacca from the Portuguese, drove the Spanish out of Formosa, and set up trading posts in Ceylon and on the Coromandel coast of India. He also made a number of treaties with local rulers, and opened up trade with Tonkin (Vietnam). And when all other European traders were expelled from Japan in 1642, he managed to retain a trading post on the island of Deshima in the bay of Nagasaki. His support of voyages of exploration provided a greater understanding of Australasia, and he also played a part in completing the construction of Batavia (today’s Jakarta) as a major trading centre.

xxxxxIncidentally, somexfifteen years before Van Diemen sent Tasman out on his first voyage of discovery, a Dutch vessel called the Batavia (illustrated), captained by Francisco Pelsaert, ran aground on the Abrolhos Islands off the coast of Western Australia. Only about 200 men, women and children managed to scramble ashore and the future looked bleak. In a desperate attempt to get help, the captain decided to take a party of men and row a longboat to Batavia, some 1,500 miles distant. Unbelievable though it seems, the party reached its destination and summoned help. Five months later Pelsaert returned to the scene of the shipwreck only to discover the survivors in a state of civil war. The ringleader, a religious fanatic named Jeronimus Cornelisz, and six of his gang were eventually rounded up and hanged.

xxxxxMost of the other rebels were put in chains for the journey to Batavia, but for some reason or other, two of them, a Wouter Looes, and a cabin boy named Jan Pelgrom, were picked out for special treatment. In November 1629 they were both taken to the mainland and left marooned at a spot called Red Bluff Beach. What happened to them is not known, but whether they survived or not, they were, without doubt, the very first white Australian "immigrants"!