xxxxxAn elaborate ceremony marked the opening of the Suez Canal in November 1869. The one-hundred mile waterway linking up the Mediterranean and Red Seas was a monumental feat of engineering and a triumph for its “architect”, the Frenchman Ferdinand de Lesseps. The canal took ten years to complete, and was delayed by the harsh climate and sickness among the 20,000 labourers. Initially dug out by pick and shovel (1859 Va), steam shovels and dredgers were later brought in to hasten the work. Britain, who had earlier opposed the scheme, saw the advantages of this shortcut to the Far East, and in 1875 the British prime minister Benjamin Disraeli snapped up shares from the Khedive of Egypt and, together with the French, gave his country a controlling interest in the running of the Canal. As we shall see De Lesseps began work on the Panama Canal in 1881 (Vc), but this project ended in failure and personal disgrace. 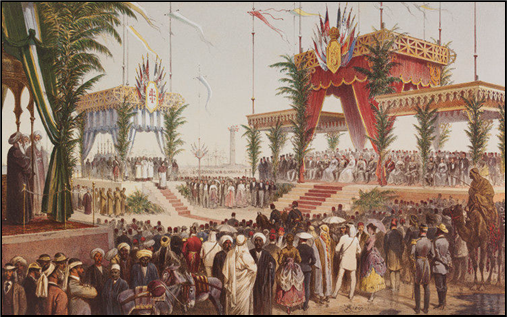 xxxxxNot surprisingly, the opening of the Suez Canal was marked by an elaborate and lavish ceremony at Port Said in November 1869. The building of this one hundred mile waterway, linking up the Mediterranean and Red Seas, was, for its day, a monumental feat of engineering, and a triumph for Ferdinand de Lesseps, the Frenchman who had planned and executed the project. Regarded by many as a gigantic achievement that rivalled the building of Egypt’s Great Pyramid, its completion was destined to bring enormous benefit to trade the world over.

xxxxxAfter an inauguration ceremony presided over by Khedive Ismail, the ruler of Egypt, sixty-eight vessels from a variety of nations left Port Said the following day to make the journey through the new waterway. Led by the French Empress Eugénie aboard the imperial yacht Aigle, the flotilla reached Suez three days later. The canal was officially open.

xxxxxCompleted in the August of 1869 after ten years of construction - four more than originally planned - this massive undertaking had not been without its financial and engineering difficulties. The cost totalled about $100 million, more than twice the estimated sum, and despite a labour force of 20,000 men, progress was slowed down by the harsh climate, a cholera epidemic which swept through the site in 1865 (killing hundreds of workers), and, surprisingly enough, the exceedingly soft nature of ground to be removed. At first, picks and shovels were used to dig out the sand and fine earth (1859 Va), but later a better method was devised by flooding the terrain and removing it by steam shovels and dredgers, brought in from Europe to do the job (illustrated). Fortunately, only a few areas of rock were encountered, and the one hundred mile route was able to make use of a number of salt lakes.

xxxxxFor the first few years of it being opened the company charged with its operation made a substantial loss and struggled to survive. Even the British, however, who had opposed the building of the canal (fearing commercial opposition from the French) had a swift change of heart. They were quick to realise the value of this international waterway as a boost to their overseas trade and a shortcut to their colonial possessions in the Far East, particularly India. Indeed, when in 1875 the Khedive of Egypt, running into money troubles, was obliged to sell his shares, the British prime minister Benjamin Disraeli, acting on his own initiative, quickly snapped them up on behalf of his government. Over 176,000 in number, these gave Great Britain a controlling interest in the Canal and, together with the French, the virtual ownership of this vital waterway for the next eighty years. 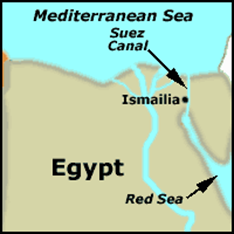 xxxxxIn 1888 the Convention of Constantinople guaranteed freedom of passage for ships of all nations in peace and war, and, in addition, forbade acts of hostility in the waters of the canal. This held good for sixty years, but with the beginning of the Arab-Israeli Wars (1948-1974) the state of Israel was frequently denied passage, and the canal was closed for eight years from 1967. And in 1956 the canal was blocked for some months after Egypt’s leader, Gamal Abdel Nasser, seized control of the company and precipitated an invasion of the canal zone by Israeli, British and French forces - the so-called Suez Canal Crisis. 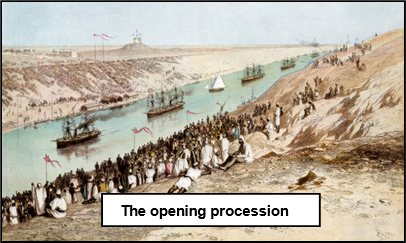 xxxxxExtensive improvements have been made to the canal on a number of occasions, notably in 1885 and 1905. By the early 1960s the depth had been increased from 26 to 40 feet, and the width at the bottom from 72 to close on 180 feet. The waterway has become one of the most heavily used shipping lanes in the world, used as a shortcut between European and American ports and those located in East Africa, southern Asia and the Pacific. However, due to its closure for eight years (from 1967 to 1975), large oil tankers were constructed (super-tankers), and these use the route around the Cape of Good Hope.

xxxxxThe “architect” of the Canal, Ferdinand de Lesseps, gained international fame and deservedly so, but, as we shall see, his attempt to build the Panama Canal in Central America, begun in 1881 (Vc), ended in failure and personal disgrace.

xxxxxIncidentally, in 1886 illuminated buoys enabled ships to use the canal at night provided they used portable generators to power a searchlight at the bow and smaller lights along the sides and stern. The first ship to do so was the P & O’s Carthage. ……

xxxxx…… Contrary to popular belief, the opera Aida was not commissioned to celebrate the opening of the Suez Canal, nor that of the Cairo Opera House in the same year. Verdi had been asked to compose a work for the occasion, but said that he did not write “occasional pieces”. ……

xxxxx…… In Nov 1899 a monumental statue of Ferdinand de Lesseps was erected at the entrance to the Canal (illustrated). It was demolished by President Gamal Nasser of Egypt when he seized the canal in 1956.

The Union Pacific and

xxxxxAfter many years of discussion and planning the year 1869 saw the completion of another feat of engineering, comparable in size to the building of the Suez Canal. In May of that year two railroad companies, the Union Pacific working from the east, and the Central Pacific, working from the west, joined up their lines at Promontory Summit, Utah.  Work on the track was begun in 1863, but construction problems (especially in the west), together with bad weather and Indian troubles, delayed completion. The building of this transcontinental railroad, 3,500 miles in length, was a major event in the history of the United States. It opened up the West to white settlement on a large scale and it provided the resources needed to bring economic progress to this vast area.

xxxxxThe year 1869 also saw the completion of another feat of engineering, comparable in size to the building of the Suez Canal. In May of that year the railroad of the Union Pacific, extending westward from Omaha, Nebraska, reached Promontory Summit in Utah and connected up with the line of the Central Pacific, working eastward from Sacramento in California. The United States was now joined by 3,500 miles of transcontinental railroad stretching from the Atlantic to the Pacific. 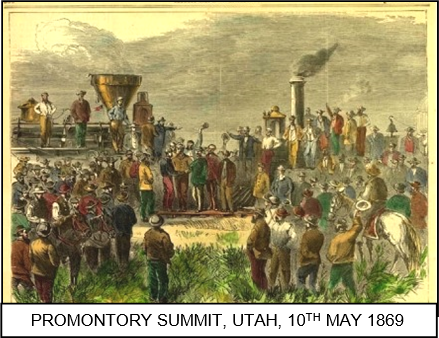 xxxxxThe idea of such a railway had been suggested and discussed as far back as the 1830s, and had been given impetus by the Californian Gold Rush of 1848 (Va). It was not until 1853, however, that Congress initiated a feasibility study. There followed years of debate over the best route such a railroad should take, but eventually in 1862 President Lincoln signed the Pacific Railroad Act authorising two railroad companies, the Union Pacific and the Central Pacific, to build a railway across the entire continent. The companies were provided with the necessary public land, and given loans for each mile of track they laid.

xxxxxWork on both sections of the track began in 1863, but by then the American Civil War was under way and progress was hampered by a shortage of funds. It was not until 1866, with the war over, that construction began in earnest. In the east the labour force was mainly made up of Irish immigrants and the route was across the Great Plains. In the west the going was much more difficult. A path had to be 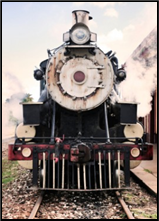 cut through the rugged Sierra Nevada Mountains, a dangerous and arduous undertaking which was finally accomplished by the manual efforts of some 27,000 Chinese immigrants (known as “coolies”). Serious construction problems, together with adverse weather conditions and Indian troubles, brought delays, but the link up was eventually made.

xxxxxThe completion of this transcontinental railway, a triumph of engineering, was one of the most important events in the history of the United States. A notable achievement of Abraham Lincoln, it helped to bind the Union together following the divisions created by the American Civil War. And it provided, too, the means by which the American West could be more quickly opened to the white settler, and the whole area given the resources needed for economic development. An eight-day journey from coast to coast replaced the ardours and dangers of the wagon train and the long, tedious journey by sea. 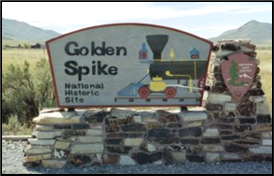 xxxxxIncidentally, the linking up of the two sections of railroad in May 1869 was ceremoniously marked by “the driving of the golden spike”, a pointed bar, engraved on all four sides to record the occasion, which was hammered home to join the two railway lines together. This event is commemorated today by an attractive plaque at the Golden Spike National Historical Site at Promontory. ……

xxxxx…… The term “coolie”, the name often given to an unskilled Chinese labourer, may have come from the Chinese word kuli which, originating from the Indo-Aryan language, meant “a show of great strength”. True or false, the Chinese immigrants certainly played a vital part in the building of the western section of the railroad.