xxxxxAn outstanding theologian, Stephen Langton wrote commentaries on most of the books of the New and Old Testaments. Pope Innocent III elected him Archbishop of Canterbury in 1207, but King John refused to recognise him. After being excommunicated in 1209, however, he relented four years later and Langton took up his appointment. A firm supporter of the barons, it is likely that he gave advice concerning the drafting of the Magna Carta. 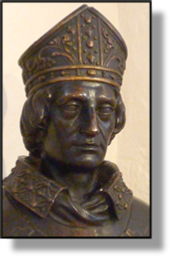 xxxxxThe English priest Stephen Langton was the son of a Lincolnshire landowner. He was educated in Paris and became chancellor of the university there after gaining a reputation as an outstanding theologian. It was while in Paris that he met and became friends with Cardinal de' Conti di Segni. The Cardinal became Pope Innocent III in 1198 and, aware of the remarkable talent of his friend, had him elected archbishop of Canterbury in 1207.

xxxxxIt was then that the troubles began. King John bluntly refused to recognise Langton, seized the revenues of Canterbury and sacked all the monks. The Pope responded by excommunicating the King in 1209. It was not until four years later when John, fearing a French invasion and the loss of his throne, made peace with the Pope, that Langton was allowed to enter England and take up his appointment.

xxxxxIn the king's domestic struggles, Langton was a firm supporter of the barons and doubtless gave advice concerning the drafting of the Magna Carta, He nonetheless made it clear that he disapproved of violence being used in the dispute. A notable scholar, he wrote learned commentaries on most of the books contained in the Old and New Testaments.