xxxxxThe Elizabethan poet Edmund Spenser is remembered today for his The Faerie Queene of 1596, an allegorical romance in six books which aimed to recapture the idealistic age of chivalry and courtly love. Queen Elizabeth is represented as the perfection of womanhood in a work designed “to fashion a gentleman or noble person in virtuous and gentle discipline”. The success of Spenser’s masterpiece owes much to Sir Walter Raleigh, who recognised its value and helped in its publication. His Spenserian stanza of nine lines greatly enriched his tales of myth and legend, and was later employed by Keats, Shelley and Byron. Other works included his pastoral poems The Shepheardes Calender, his love sonnets Amoretti, and Colin Clouts Come Home Againe, a poem dedicated to Raleigh. He lived in Ireland for the last twenty years of his life, but was forced to return to London the year before his death. 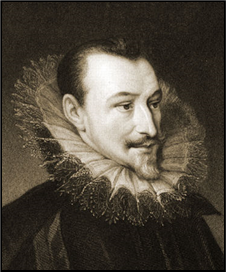 xxxxxThe outstanding Elizabethan poet Edmund Spenser is today mainly remembered for his The Faerie Queene, an allegorical romance in six books. He was born in London, attended the Merchant Taylor's School as a "poor boy" - where he was a fellow pupil with the dramatist Thomas Kyd - and then went on to study at Pembroke Hall in Cambridge. He entered the service of the Earl of Leicester in 1579, and the following year was appointed secretary to Arthur Lord Grey, the new Lord Deputy of Ireland. It was while in his service that he completed the first three volumes of The Faerie Queene. Save for occasional visits to London, he remained in Ireland for the remainder of his life, living near Kilcolman, not far from Cork, for some of that time.

xxxxxThe Fairie Queene was originally planned as a lengthy epic of 12 books, aimed at recapturing the idealistic age of chivalry and courtly love, but only six volumes were completed. In the poem, the Queen of Fairyland, the perfection of womanhood, clearly represents Queen Elizabeth, and the central figure, King Arthur, embodies those virtues represented by each of the six knights - such as holiness, chastity, and justice - and put to good use in their colourful and heroic 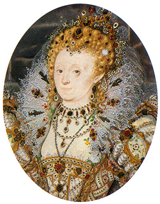 adventures in the service of their Queen. The feeling of antiquity is heightened by the use of obsolete words and expressions, and he uses a new form of nine-line stanza - called the Spenserian stanza (later employed by Keats, Shelley and Byron). The melodious verse this metre creates, together with the richness of the imagery, produce a kaleidoscope of legend, myth and folklore upholding a life of virtue. As Spenser himself put it, his aim in writing The Fairie Queene was "to fashion a gentleman or noble person in virtuous and gentle discipline". This "public image" is seen here in the portrait of Elizabeth by the miniaturist Nicholas Hilliard, painted around 1600. 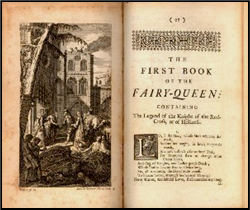 xxxxxThe success of Spenser's masterpiece owes much to one of the Queen's favourites, the adventurer Sir Walter Raleigh. He visited Spenser in 1589 and, being greatly impressed with the poem, he took Spenser back to London where the work was published and he was presented to the Queen. He dedicated The Fairie Queene to Elizabeth, and later, in 1595, in recognition of Raleigh's help, he dedicated his work Colin Clouts Come Home Againe to him, a poem in praise of country life in which Colin Clouts is a lovesick shepherd.

xxxxxIn 1596 he made another visit to London to have the next three books of The Fairie Queene published. It was at this time that he wrote his short lyrical poem Prothalamion, and also the collection of poems Fowre Hymnes in honour of love and beauty. He then returned to Ireland, but in October 1598 rebels attacked and burned his castle at Kilcolman. He and his family only just managed to escape, and they fled to London. Spenser died there in January the following year.

xxxxxHis large poetic output testifies to the width of his knowledge not only in the classics, but also in French, Italian and English literature. The Fairie Queene, for example, leans heavily upon Virgil's Aeneid, Ariosto's Orlando Furioso, and Tasso's Gerusalemma liberata. His other works include The Shepheardes Calender, comprising twelve pastoral poems, one for each month (1579), Astrophel (1586), and in 1595 his love sonnets Amoretti, which includes Epithalamion, a wedding song composed to celebrate his second marriage the previous year (short extract below).

xxxxxIncidentally, the famous poets' corner in Westminster Abbey was begun with the burial there of Spenser in 1599. Regarded by many as the "Prince of Poets", we are told that poets walked alongside his hearse and threw poems and pens into his grave. Today, poets' "corner" is made up of four bays and aisles in the south transept and contains tributes to a large number of outstanding literary figures.

Behold, whiles she before the altar stands,

Hearing the holy priest that to her speaks,

And blesseth her with his two happy hands,

How the red roses flush up in her cheekes,

That even th'Angels, which continually

About the sacred Altare doe remaine,

Forget their service and about her fly,

Ofte peeping in her face, that seems more fayre, 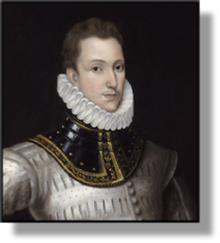 xxxxxIt was while working for the Earl of Leicester that Spenser joined the literary circle led by Sir Philip Sidney (1554-86) and came to admire his work. He dedicated one of his early poems, The Shepheardes Calender, to him, and composed an elegy to mourn his early death. Sidney, a favourite of the Queen, was the epitome of the cultured Renaissance gentleman, a noble person who was fashioned, indeed, "in virtuous and gentle discipline". He was a member of parliament, went on a number of diplomatic missions, and served as a soldier. In 1586, as governor of Flushing in the Netherlands, he joined an expedition to assist the Dutch in their fight against Spanish rule. It was during this campaign that he was mortally wounded in a skirmish at Zutphen. Such was the respect in which he was held, that his funeral service was conducted in St. Paul's Cathedral amid much pomp, and his death was marked by a month of mourning. 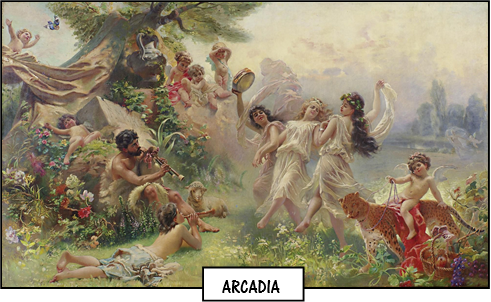 xxxxxNone of his poetic works was published in his lifetime because, as a gentleman, Sidney would take no part in commercialism. Nonetheless, much of his writing was circulated in manuscript form. The best known of his compositions is Arcadia, a pastoral romance in both verse and prose, and his 108 sonnets telling of the hapless love affair of Astrophel and Stella - doubtless a reflection on his own innocent love for Penelope Devereux, the daughter of the Earl of Essex and wife of Lord Rich. His Defence of Poesie, published in 1595, was an essay of literary criticism - the first of its kind - extolling the virtues of poetry and defending it against the charges made by Puritans that it was immoral and debased. Like Spenser, whose work he applauded in his Defence, his poetry was rich in imagery and both charming and lyrical. (See poem below.)

xxxxxAs a patron of men of letters, many works were dedicated to him, including Diverse voyages touching the discoverie of America by the English geographer Richard Hakluyt. Apartxfrom his friendship with Spenser, he discussed art with the miniaturist Nicholas Hilliard, and science with the English mathematician and astrologer John Dee. He also supported the voyages of Martin Frobisher in his efforts to find a north-east passage to the Far East, and, had he lived longer, he would doubtless have taken part in attempts to establish English colonies in the New World.

My true love hath my heart, and I have his,

By just exchange one for another given:

I hold his dear, and mine he cannot miss,

There never was a better bargain driven:

My true love hath my heart and I have his.

His heart in me keeps him and me in one,

My heart in him his thoughts and senses guides:

He loves my heart, for once it was his own,

I cherish his because in me it bides:

My true love hath my heart, and I have his. 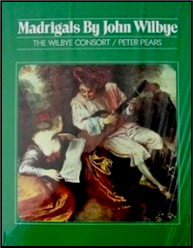 xxxxxIncidentally, anxEnglish composer at this time who, like his contemporary William Byrd, did much to develop the madrigal was John Wilbye (1574-1638). His reputation rests mainly upon his two books of madrigals, published in 1598 and 1609. In these works, 64 in number, he showed a sensitive understanding of the interplay between words and music, and the music itself was remarkable for its beauty and vocal orchestration. He took his texts from popular poems of the day, including ones by Edmund Spenser and Sir Philip Sydney. ……

xxxxx…… As we shall see, the English organist Orlando Gibbons also gained fame for his development of the madrigal. His Madrigals and Mortetts in Five Parts was well received when published in 1612. The madrigal, often based on a love theme, originated in northern Italy in the 14th century, and possibly derives from mandriali, meaning a short pastoral poem.

xxxxxSir Philip Sidney (1554-86), a poet whom Spenser greatly admired, was a favourite of the Queen and the epitome of the cultured Renaissance gentleman. He was a soldier, politician and diplomat. The best known of his works, none of which was published in his lifetime, were Arcadia, a pastoral romance in both verse and prose, and the 108 sonnets he composed about the hapless love affair of Astrophel and Stella. Like Spenser, his poetry was rich in imagery and both charming and lyrical. His Defence of Poesie of 1595 was an essay of literary criticism - the first of its kind - defending poetry against attacks by the Puritans. Among his friends were the miniaturist artist Nicholas Hilliard, and the explorer Martin Frobisher. He was killed in battle while assisting the Dutch in their struggle against the Spanish and, so highly was he regarded, that his funeral was held at St. Paul’s Cathedral and was followed by a month of mourning.