xxxxxAfter the coming to power of Sunni Ali in 1464, the Songhai Empire of West Africa began to grow again around the trading city of Timbuktu. As we have seen, by 1512 (H8) his successor Muhammed I had built an empire of great size. However, with the death of its leader Askia Dawud in 1582, a decline set in. The end came in 1591 when the Moroccans, equipped with firearms, swept down from the north, won a decisive victory at the Battle of Tondibi, and captured the important centres of Timbuktu and Gao. 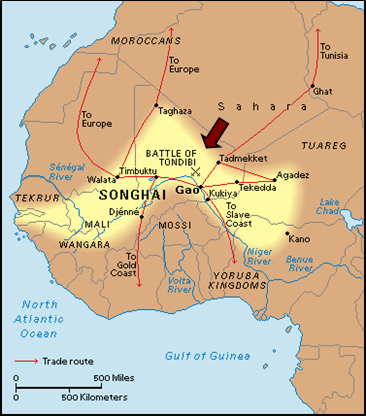 xxxxxIt was in the latter part of the fourteenth century that the Songhai Empire of West Africa - once dominated by its powerful neighbour, the Mali - began to re-assert itself. With the coming to power of Sunni Ali in 1464, land was re-taken from the Mali, and the lucrative trade routes, carrying gold and goods across the western Sahara, were re-opened. The empire, centred around the trading city of Timbuktu, now began to grow in both wealth and prestige. As we have seen, by 1512 (H8), under the "fire and sword" policy of his successor, Muhammed I, the empire had grown to an immense size, and included areas which now make up part of the modern states of Guinea, Mali, Senegal, Mauritania and northern Nigeria.

xxxxxDue in no small part to the sound administrative system established by Muhammed, the Songhai remained the dominant force in the area for some years after his death, but bitter disputes over the succession, and an increasing number of raids from neighbouring states seriously weakened the empire. The reign of Askia Dawud, an able leader, helped to restore peace and order for a time, but with his death in 1582 the end was in sight. The empire's most powerful neighbour, Morocco, began to step up its attacks, raiding the salt deposits of Taghaza, and threatening an all-out invasion in order to break the Songhai hold on the desert trade routes. 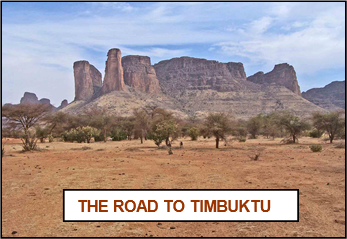 xxxxxThis came in 1591 when, under their ambitious leader Issihak II, the Moroccans attacked in force. An army of some 4,000 men, equipped with firearms, managed to cross the Sahara. They advanced deep into Songhai territory and - swords and spears proving no match for muskets - easily defeated the Songhais at the Battle at Tondibi (arrowed on map above). They then went on to capture the important centres of Timbuktu and Gao. Resistance continued for some years, but the Moroccans remained in control, and were destined to stay in the area until well into the 18th century. It was the end of the Songhai Empire and, for a time, an end to the trans-Saharan trade upon which the area so vitally depended. The caravan traffic was eventually restored, but a new trade route was also being established along the coast, where Europeans were setting up trading posts to deal, above all, in gold and slaves.