used to drive a mechancial saw. 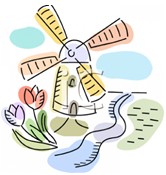 In 1558 the Portuguese introduce

Europeans to the habit of taking snuff.

The Index Librorum Prohibitorum is issued by Pope Pius IV, a list of publications not to be read by members of the Roman Catholic Church.

The final list was published in 1948, but the Index was not formally

1567 the Portuguese establish the city of Rio de Janeiro, so named because when it was first discovered the bay was thought to be the opening to a river (Rio) and the month was Janeiro!

In 1561 tulips come to Western Europe from the Near East and chess playing takes a hold in Spain.

One of the first modern eisteddfods for Welsh

music and literature is held at Caerwys.

into general use in

In 1588 the English cleric Timothy Bright invents the first system of shorthand.

Consisting of straight lines and full and half circles, it was called Charcterie:

an Arte of Shorte, Swifte, and Secrete Writing by Character. It was based to

some extent on a system by the Roman Marcus Tullius Tiro in 63 BC!

In 1595 the English army finally abandons the bow as a weapon.

the means of flushing the bowl, one is later installed in the Queen's Palace at Richmond.

Itxwas around this time that the famous Imperial Spanish Riding School was founded in Vienna. Famed for its haute école - high standard of classical horsemanship - it became noted for its white Lipizzaner horses, bred especially for their elegance and obedience. These were imported from Spain and thus gave the school its name.

InxVenice the Ponte dei Sospiri - the Bridge of Sighs - is built in 1600 by the Italian architect Antonio Contino. Spanning the narrow canal between the Doge's Palace and the prison, it was so called because very few prisoners returning from the judgement hall ever crossed it again!

1601  The Gobelin family of dyers lend their factory in the Faubourg St. Marcel,

Paris, to King Henry IV. He encourages the immigration of Flemish weavers and

sets up a thriving tapestry industry which still bears the name Gobelin today.

The Oxford University Library, originally founded by Humphrey, Duke of Gloucester, in 1410, is restored and enriched by Sir Thomas Bodley (1545-1613) in 1598, and opened as

1596  tomatoes are introduced into England.

for the first time. Composer