xxxxxIt was not until the 13th century that the Mongols overran areas of southern Siberia. They then extended their hold towards the west, but after losing control of Muskovy around 1480, the small Khanate of Sibir emerged as the dominant force. However, in 1581 the Cossack leader Yermak Timofeyevich crossed the Ural Mountains and, overrunning the Khanate of Sibir, opened the way for the Russian conquest of Siberia. The pacific coast was eventually reached in 1639. A fur trade centre was established at Yakutsk, and minerals were discovered at the turn of the century. In the Amur Basin, however, the Russians came up against the Chinese and, by the Treaty of Nerchinsk in 1689 (W3), were obliged to accept the Amur River as their south-eastern border. As we shall see, it was then that the new Russian, leader, Peter the Great, bent on opening a window facing Europe, turned his attention to gaining access to the Back Sea in the south, and the Baltic in the west. 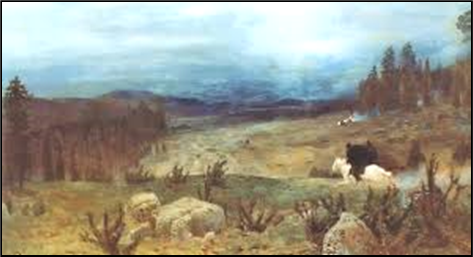 xxxxxFor hundreds of years, the vast area of Siberia was inhabited by various nomadic peoples. It was not until the 13th century that the Mongols, arising out of central Asia, overran the southern areas of Siberia and went on to dominate what is European Russia today. Over the next two hundred years they extended their influence over parts of western Siberia, but with the collapse of their control over Muskovy around 1480, their hold on these regions virtually came to an end. One of the small khanates that emerged from this disintegration was Sibir (Russian for Siberia), a small state that was to give its name to the huge land mass that stretches eastwards from the Ural Mountains to the Pacific Ocean.

xxxxxIncursions into north western Siberia had been made by Russian explorers as early as the 12th century but, as we have seen (1565 L1), it was not until the reign of Ivan the Terrible (1547-84), after a strong, centralised monarch had been established, that expansion into Siberia began in earnest. Even then, the advance into this vast area was not the work of the Tsar himself - for many years engaged in a fruitless struggle to gain access to the Baltic Sea - but was due to a Cossack leader named Yermak Timofeyevich. In 1581 he led an expedition of just 840 men across the Ural Mountains and, overrunning the Khanate of Sibir, brought most of the Ob River Basin under the empire's control (arrowed). The way was open for the conquest of Siberia. It was left to Boris Godunov, who reigned 1598 to 1605, to have the dubious distinction of being the first Tsar to use Siberia, or the part then occupied, as a place of banishment for dissidents - in his case a group of boyars.

xxxxxFollowing the success of Timofeyevich's “invasion”, deeper incursions were organised, and in 1639 the Russians reached the Pacific coast, having established a series of fortresses en route to 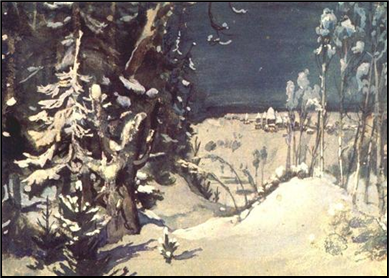 control the surrounding territory. Because of the remoteness of the area and the harsh weather conditions, the population remained small and scattered for the next two hundred years, but a lucrative fur trade, based in Yakutsk, was established (arrowed), and after about 1700, minerals were discovered. In the meantime, however, the Russians continued expansion in the east did not go unopposed. Exploration of the Amur Basin in the 1680s brought them face to face with the Chinese, and this called a halt to their advance in the south-eastern region of this vast, sprawling land. By the Treaty of Nerchinsk in 1689 (W3), the Russian-Chinese border was set along the Amur River (arrowed). As we shall see, later that year Peter the Great became the effective leader of Russia, and he, bent on opening a window facing onto Europe, concentrated his efforts on gaining access to the Black Sea in the south, and the Baltic Sea in the west. 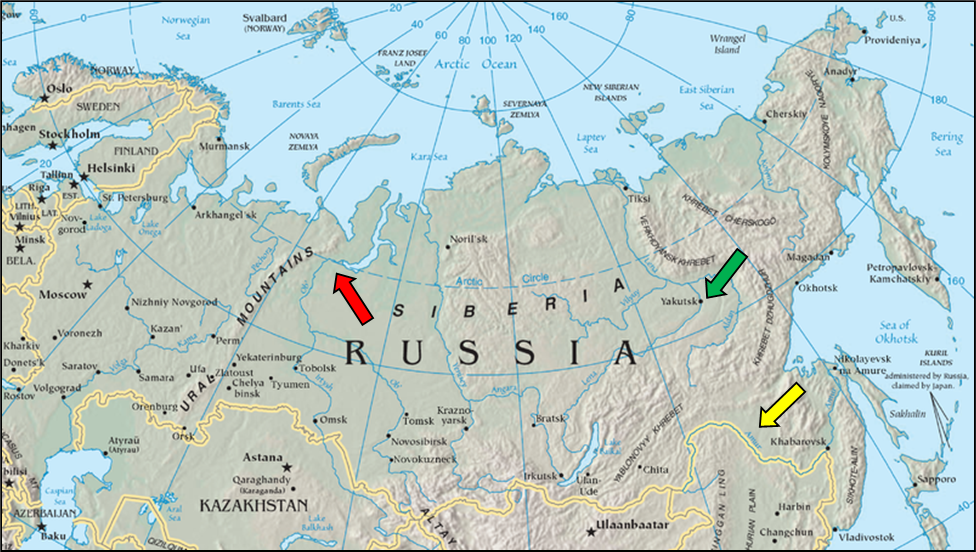