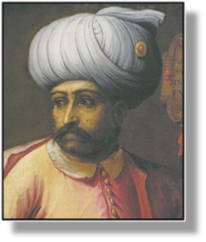 the capture of Constantinople by the Ottoman Turks in 1453 (H6), some 150 years after their modest beginnings under their founder Osman I, was but a prelude to greater territorial expansion. Mehmed II, the “Roman Caesar” as he called himself, made further conquests in 1468 (E4), and at his death in 1481 the Ottomans were indeed on route to becoming a world empire. A vast area comprising Anatolia and the Balkans, wedged between the Aegean and Black Seas, was now in their hands. A power-base had been established from which the Ottoman Turks could advance. Little did they realise at that time just how far that advance would take them.

xxxxxSelim I came to power in 1512 following a period of civil strife. Having eliminated all internal opposition, he turned his attention to a potential threat, the Safavid dynasty in Iran, led by its founder Shah Ismail I. In 1514 he first subdued the Turkish Kizilbash (Red Heads), fervent followers of this dynasty, and then turned upon Ismail himself, defeating him decisively at the Battle of Chaldiran, on the eastern side of the Euphrates (arrowed on map). The battle was hard fought, but the 70,000 Safavids, carrying only spears and arrows, were no match for an Ottoman force of 120,000 men who were highly trained and armed with muskets.

xxxxxThis overwhelming victory did not, in fact, 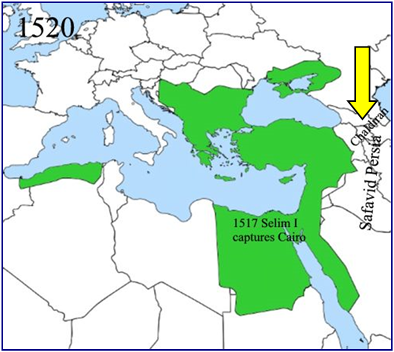 lead to the occupation of Iran itself, but it gave Selim full control of the Kurdish and Turkmen principalities within Anatolia. Furthermore, it gave him the confidence to take on the Mamluk rulers of Egypt and Syria, a neighbour whom Mehmed II, you might recall, had considered too powerful to tackle. In 1516 he advanced into Syria and defeated the Mamluk forces at the Battle of Marj Dabiq, north of Aleppo. In the following year the Mamluks, having regrouped in Egypt, he followed up this success with another resounding victory, this time at the Battle of Raydaniyah, near Cairo in 1517. In less than six months his campaign had brought Egypt, Syria, Palestine, and the Lebanon under Ottoman rule. In addition, before leaving Cairo he was presented with the keys to the holy city of Mecca, a symbol of office which made him the acknowledged leader of the Islamic world.

xxxxxThe defeat of the Mamluks more than doubled the size of the Ottoman Empire but, as we shall see (1526), it was the reign of his son, Suleyman “the Magnificent” which was to bring the empire to the pinnacle of its power and prestige.

xxxxxAs we have seen, the capture of Constantinople by the Ottoman Turks in 1453 (H6) was but a step towards further expansion. Mehmed II made further conquests in 1468 (E4), and at his death in 1481 the empire covered most of Anatolia and the Balkans. When Selim I came to power in 1512 he attacked the Safavid dynasty, defeating their leader at the Battle of Chaldiran in 1514. He then rounded on the Mamluks, gaining victories over them in Syria, at the Battle of Marj Dabiq, and then in Egypt at the Battle of Raydaniyah, near Cairo, in 1517. By then he was recognised as the leader of the Islamic world, holding sway over Egypt, Syria, Palestine and the Lebanon. As we shall see (1526), his successor, Suleyman “the Magnificent” was to bring the Empire to the height of its power.