xxxxxThe Duchies of Schleswig-Holstein, situated at the base of the Jutland peninsula, were held by the kings of Denmark from 1460 onwards, but by the beginning of the 19th Century their ownership was being disputed by the large German population within both territories. As we have seen, the Germans’ struggle for independence, assisted by Prussia and the German Federation, broke out in 1848 (Va), Europe’s Year of Revolutions. The conflict, known as the First Schleswig War, actually dragged on for three years. The Danes, aided by the Swedes, fought well, but only the intervention of the Great Powers saved them from defeat. The major countries of Europe, and particularly Britain, did not want to see Kiel fall into Prussian hands, and the London Protocol of May 1851 concluded that Schleswig and Holstein were independent entities, but joined by a personal union with the King of Denmark. The Germans and Prussians were obliged to give way. However, in 1863, when the king, Frederick VII, died without an heir and his successor Christian IX incorporated Schleswig into Denmark, the Germans claimed this to be a violation of the London Protocol and began the Second Schleswig War in February 1864. Aided by Prussia and Austria, the two most powerful members of the German Federation, they quickly overran the two duchies and had occupied the whole of the Jutland peninsula by June. This time the Great Powers could come up with no workable solution and, by the Treaty of Vienna in the October, Schleswig was given over to Prussia, and Holstein to Austria. This settlement, engineered by the German statesman Otto von Bismarck, was to give Prussia the chance to advance further. When disagreement broke out between the two powers concerning the administration of the duchies, Bismarck found a ready excuse for war. As we shall see, the Austro-Prussian War of 1866 was to prove a vital step towards German Unification under Prussian leadership. 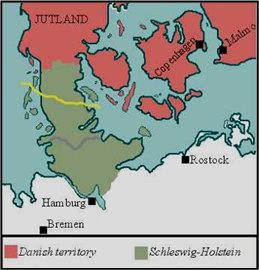 xxxxxThe Duchies of Schleswig-Holstein, situated at the base of the Jutland peninsula, were held by the kings of Denmark from 1460 onwards. However, they never formed an official part of the kingdom, and over the years their ownership was disputed by a substantial and growing German population within both territories. Come the early part of the 19th century, the national awakening that followed the French Revolutionary Wars was not lost on the German-speaking peoples across Europe, and brought into question the rightful sovereignty of these two territories. As it so happened, the old pre-war boundaries of Europe were largely restored after the fall of Napoleon, but Holstein was admitted to the new German Federation and this added to the case for change. The struggle for national identity continued to simmer below the surface and, as we have seen,  broke out with a vengeance in 1848 (Va), Europe’s Year of Revolutions. In March of that year the new king of Denmark, Frederick VII, declared that the two duchies were an integral part of Denmark and this sparked off the conflict.

xxxxxThe First Schleswig War, led by the sizeable German population and supported by troops from both the kingdom of Prussia and the German Confederation, dragged on for three years, prolonged by periods of truce and political wrangling. The Danes, aided by forces from Sweden, fought well, but they would have been defeated had it not been for the diplomatic intervention of the Great Powers of Europe. In August 1848, soon after the outbreak of the fighting, they came out against any dismemberment of Denmark. They did not want to see Kiel fall into Prussian hands. Indeed, Britain even threatened to send a fleet to maintain the status quo. Then, with the conflict entering its third year, they produced the London Protocol of May 1851, describing  the integrity of Denmark as a “European necessity”, and declaring that the duchies of Schleswig-Holstein were independent entities but joined by personal union with the king of Denmark. This time the Prussians and Germans were obliged to give way, but the separatist movement continued over the next twelve years as the demand for a “Greater Germany” grew. In 1863 it was to have another chance. 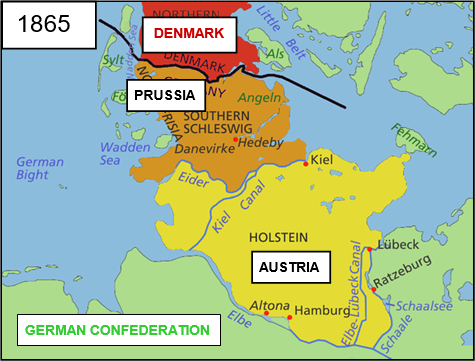 xxxxxWhen Frederick VII  died without heir in 1863, the November Constitution, introduced by his successor, Christian IX, made Schleswig an integral part of Denmark. This was seen as a violation of the London Protocol. Christian IX was not, in fact, the first in line, this fell to Friedrich von Augustenburg. Though by-passed in favour of Christian, he was seen as the rightful heir by the German Federation (of which Holstein was still a member), and he quickly became the symbol of the German independence movement. In the same month, November, he proclaimed himself Frederick VIII of Schleswig-Holstein and at once called for and received the support of Prussia and Austria, the two most powerful members of the German Federation. In the following month Saxon and Hanovarian troops entered Holstein, and in the New Year the Minister President of Prussia, Otto von Bismarck - prepared as always to use “blood and iron” in the cause of German unification - demanded that Denmark rescind the November Constitution within 48 hours. This was impossible in practice and was rejected out of hand by the Danish government. War then became inevitable.

xxxxxIn the conflict that ensued, generally named the Second Schleswig War, the Danes were heavily outnumbered. They had some 38,000 troops, but Prussia alone had 43,000, and Austria had an army of some 28,000. Furthermore the Danes were outgunned, their standard rifle was inefficient, and they lacked logistical support. They were to prove no match for the new Prussian army, a highly disciplined, well equipped force. At the beginning of February 1864 Prussian and Austrian forces crossed the border into Schleswig and within three days had pushed the Danes back to the Danevirke an ancient line of earth and stone ramparts which, apart from a few miles either side, stretched across the neck of the Jutland peninsula. A brief stand was made there, but on the night of the 5th February, fearing that this defence line could be easily outflanked, the Danish commander ordered a withdrawal to Flensburg, leaving behind all his heavy artillery in order to make the going easier. With the Prussians and Austrians soon in pursuit, however, the withdrawal, slowed down by a heavy snowstorm, quickly turned into a desperate and costly retreat. Six hundred men were captured or killed before the exhausted army reached the fort at Dybbol and Als island. 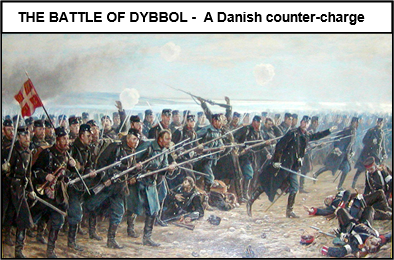 xxxxxThe following month saw a number of skirmishes, the Austrian capture of Vejle, and the beginning of the Prussian bombardment of the Danish fortress of Dybbol. Some 65,000 shells were eventually unleashed on this stronghold before it was stormed and captured by 10,000 Prussian troops in mid-April, despite some gallant resistance (illustrated). The fall of Fredericia followed, and then over the next two months the Germans occupied the whole of the Jutland peninsula and won the Battle of Als, the last major engagement of the war. In the meantime, an attempt to find an international solution to the problem - as in the First Schleswig War - ground to a halt. A Conference attended by Britain, Russia, Sweden and France was held in London, opening on the 25th April, but  so complicated were the issues involved that it broke up without reaching any conclusions. The British favoured the Danes - not wanting to see the growth of German naval power in the Baltic - but Russia, still recovering from the Crimean War, was anxious to keep a low profile, and France saw no advantage in becoming militarily involved.

xxxxxThexpeace settlement was eventually signed at the Treaty of Vienna at the end of October, and during the next month Prussian and Austrian troops withdrew from Jutland. During the war the Danes lost close on 14,500 men, killed and wounded, the Prussians 3,500, and the Austrians 1,100. And as a result of the treaty, Denmark lost 40% of its land area, and its population was reduced from 2.6 to 1.6 million. In the south, its new frontier along the Kongea River was 150 miles north of the pre-war border.

xxxxxThexDuchies themselves were not given, in fact, to the Duke of Augustenburg. In accordance with an agreement, cleverly engineered by Bismarck at the Gastein Convention in the August of 1865, Denmark ceded Schleswig to Prussia and Holstein to Austria. It was an arrangement which Bismarck could clearly exploit to the full. Unsurprisingly, It was not long before disagreement broke out between the two countries over the administration of the territories, providing Bismarck with a convenient pretext to go to war. As we shall see, the Austro-Prussian War of 1866 was to drive Austria out of the German Federation and bring about Prussian domination of the German states - a prelude to German Unification and the rise of the German Empire. Needless to say, at the conclusion of that war, also aptly known as the Unification War, Holstein was assigned to Prussia. 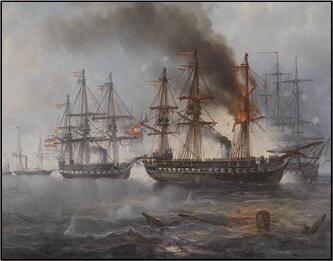 xxxxxIncidentally, there were two significant naval encounters during the Second Schleswig War: the Battle of Rugen in March and the Battle of Heligoland in May (illustrated). In both actions the Danes proved successful in preventing the Prussians from breaking their naval blockade of the area. ……

xxxxx……  For a conflict lasting a mere nine months - if that - the Second Schleswig War has taken on a large number of other names. It is also known as the Danish-Prussian War, the German Danish War, the War of 1864, the Prusso-Danish War. and the Schleswig-Holstein War of Succession! ……

xxxxx……  The Battle of Dybbol, fought on the 18th April, is a military memorial day in Denmark. A ceremony of remembrance, attended by soldiers in period uniforms, takes place on Dybbol fort hill.

xxxxx……  Lord Palmerston, the British prime minister at the time, is quoted as saying that only three people understood the Schleswig-Holstein Question and of these one was dead, the second had gone mad, and the third (himself) had forgotten everything about it! …… 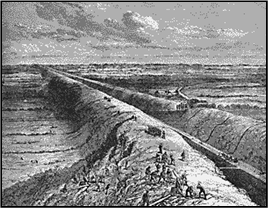 xxxxx…… Towards the end of the Second World War (1939-1945), the German commander in Denmark, fearing an Allied invasion, gave orders that the Dannevirke, the earthen defence ramparts dating from the 9th century and regarded as a national symbol of defiance, should be converted into an anti-tank trench. Alarmed at this idea, the Danish archaeologist Soren Telling contacted the SS chief Heinrich Himmler (second in authority to Adolf Hitler) pointing out that this earth work was a relic of Aryan (Germanic) culture and should be preserved. Himmler agreed and the work was promptly stopped.