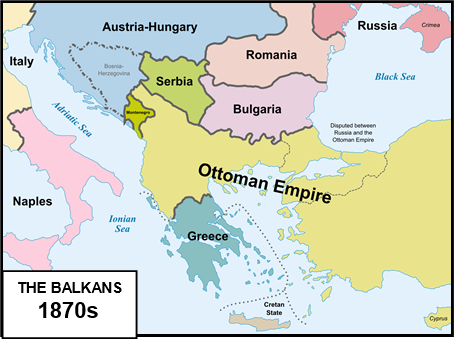 xxxxxRussia had for long aimed to extend its influence, at worst, and its control, at best, into the Balkan Peninsula. Indeed, the Crimean War of 1852 to 1856 had been triggered off by British and French fears that the Russians might achieve one or other of these aims. Both countries had been willing to prop up the ailing Ottoman Empire rather than see Russia gain such a strategic advantage. Now, just twenty years later, the Russians had another opportunity to reopen what had come to be called the “Eastern Question”. The strength of the Turkish Empire was continuing to ebb away, and a power vacuum was in the making. In 1875 uprisings against Turkish rule broke out in Serbia and Herzegovina, and when this thrust for independence spilled over into Bulgaria the following year, both Serbia and Montenegro (see map) declared war on Turkey. It was an opportunity that Russia could not afford to miss.

xxxxxAs we have seen, it was under their able leader Murad I that the Ottoman Turks had begun their advance into the Balkans in the 1370s. After years of fighting, the Battle of Kosovo in 1389 (R2) paved the way for the conquest of almost the entire area. With the capture of Vidin in 1396 Bulgaria was eventually overrun, and Serbia was subdued by 1459. Montenegro managed to keep part of its territory out of Turkish hands - due mainly to its mountainous terrain and the tenacity of its people - but after fierce resistance Bosnia fell to the Turks in 1463 and Herzegovina twenty years later. For close on five centuries these provinces were under the “Turkish yoke”, their independence lost and their national history and cultural identity preserved only in remote monasteries and villages. Their leaders were overthrown, taxes were high, and the peasantry became serfs to Turkish masters. Nevertheless, for many years life within the Ottoman Empire was stable, peaceful and, at times, even prosperous, - in marked contrast to the bloodshed and turmoil of preceding centuries. Furthermore, no attempt was made by the Turks to convert their new subjects to Islam, many local customs and laws were able to be retained, and, in general, there was no large influx of Turkish peasantry, as originally feared. 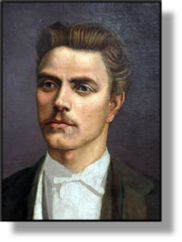 xxxxxHowever, once the Ottoman Empire began to go into decline, and law and order started to break down - bringing an influx of Turkish refugees in its wake - the political climate changed dramatically. Independence then became a possibility and a coveted goal. Secret societies organised armed resistance, guerrilla groups were formed, and outside help was received from the neighbouring states of Austria and Russia. Periodicxuprisings occurred from the 17th centuries onwards, but rebellion on a large scale did not begin until the late 1860s. It was then, for example, that the Bulgarian revolutionary leader Vasil Levski (1837-1873) (illustrated) - later dubbed “the Apostle of Freedom” - began setting up a resistance movement across the country to prepare for a national insurrection. He was captured and executed in 1873, but by then the groundwork had been laid. Following violent uprisings in Bosnia and Herzegovina in 1875, Bulgaria broke out in revolt the following year - the so called April Risings - and in July both Serbia and Montenegro added their support by declaring war on Turkey.

xxxxxThese widespread rebellions were brutally suppressed by the Turkish authorities. In Bulgaria in particular, the massacre of men, women and children - the so-called Bulgarian Atrocities - was on a horrifying scale, committed for the most part by the bashi-bazouks, irregular mercenary troops well 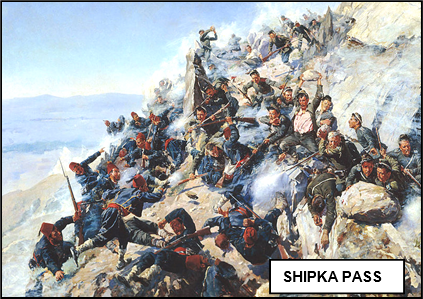 known for their extreme acts of violence and cruelty. Some fifty villages were pillaged, five monasteries were destroyed, and over 15,000 people were slaughtered, mostly in and around the city of Philippopolis (now Plovdiv). Such ferocious acts aroused public condemnation throughout Europe. In England, for example, the statesman William Gladstone published a pamphlet entitled The Bulgarian Horrors and the Question of the East. Demanding as it did the withdrawal of the Turks from Bulgaria, 200,000 copies of this powerful attack upon the Ottoman Empire had been sold by the end of September 1876.

xxxxxThe public outcry against these “Horrors” led to a conference at Istanbul, called and attended by the Great Powers. This put forward a series of reforms aimed at a settlement in the Balkans, but the Sultan would make no concessions. This gave the Russians their long awaited chance. As self-styled protector of the Orthodox Christians living within the Ottoman Empire, the Tsar, Alexander II, declared war on the Turks in April 1877. 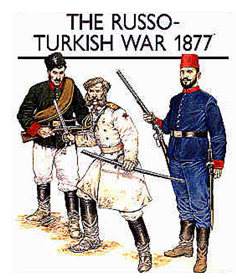 xxxxxThe Russians, supported by Romania and with a 7,000 detachment of Bulgarian volunteers, had an army of about 200,000 in the Balkan peninsula, an advantage of some 40,000 men, but the Turks had well fortified positions along the Black Sea and were confident of victory. As it turned out, however, the Russians chose to attack through Bulgaria (see map below). In July they constructed a bridge across the Danube near Svishtov and, virtually unopposed, took the fortress of Nikopol. The Turks then moved quickly to Plevna (now Pleven) to block any further advance and managed to repulse two Russian attacks, inflicting heavy casualties on both occasions. However, having gained the advantage, the Turks failed to counter attack and the Russians, joined by fresh Romanian forces, forced the surrender of the town at the end of November. There followed a series of battles for Shipka Pass (one illustrated above). This high route through the Balkan Mountains was eventually captured by the Russians, opening the way into Thrace and the capture of Adrianople (now Edirne) in January 1878.

In the 1870s Russia had yet another chance to extend her influence into the Balkans and the Black Sea area. As we have seen, the Balkans were absorbed into the Ottoman Empire from the 14th century onwards, and the emerging states of this area were placed under the “Turkish yoke” for close on five hundred years. Attempts to overthrow their Moslem masters were made as from the 17th century, but rebellion on a large scale did not take place until 1875. In that year uprisings against Turkish rule in Serbia and Herzegovina spilled over into Bulgaria, and the following year both Serbia and Montenegro declared war on Turkey. These rebellions were ruthlessly crushed by the Turks. In Bulgaria over 15,000 men, women and children were massacred, and these Bulgarian Atrocities (or Horrors) were condemned across Europe. Seizing this opportunity, Russia declared war on Turkey in April 1877. They attacked through Bulgaria and, after capturing the town of Pleven and winning the battle for the Shipka Pass, took Adrianople (now Edirne) in January 1878. However, their success alarmed Austria, Britain and France. The Disraeli government in Britain sent warships to Istanbul, and this forced Russia to stop its advance six miles west of the Turkish capital. Instead, they made a peace agreement with the Turks - the Treaty of San Stefano in March 1878 - but, as we shall see, the terms were so favourable to Russia’s imperial designs that they proved totally unacceptable to Britain and the other Great Powers, and were severely amended in July 1878 by the Congress of Berlin.

xxxxxMeanwhile in the Caucasus a Russian army of 75,000 men, taking on a Turkish force of similar size, captured the town of Bayazid in April 1877 and by the end of May had reached the area around Kars. The Turks launched a counter offensive but this failed, and Russian forces had advanced further and captured the region of Ajara by mid- October.

xxxxxThe speed and success of the Russian forces seriously alarmed Austria, Britain and France. As on previous occasions, these powers feared that a Russian victory over the Ottoman Empire would give Russia unacceptable influence (if not outright control) over the Balkans and the Black Sea. In 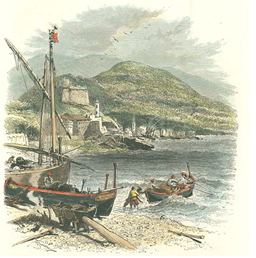 Britain in particular, public opinion took a decided U-turn. Opposition to the Turks, so vociferous three months earlier, now turned to patriotic support. The harsh world of politics dictated that Russia should never pose a threat to British power in the Mediterranean and beyond. Thus as the Russian army began an advance on Istanbul the British prime minister, Benjamin Disraeli, sent six ironclads to the Middle East. When they anchored within sight of the Turkish capital in February 1878 the Russians called a halt at the village of San Stefano (illustrated), just six miles short of their goal. Weakened by heavy losses - put as high as 200,000 - and not wishing to risk a war with Great Britain, they agreed to make a peace settlement.

xxxxxBut with the fighting now over, power politics replaced the battlefield. As we shall see, the terms imposed by Russia at the Treaty of San Stefano in March 1878, - highly favourable to Russia’s imperial designs - proved totally unacceptable to the other Great Powers, and were severely restricted by international agreement, imposed by the Congress of Berlin in July 1878.

xxxxxIncidentally, the battle for Shipka Pass is commemorated by the Shipka Monument of Freedom, erected in honour of the Russian soldiers and Bulgarian volunteers who were killed in one of the fiercest encounters of the war. Completed in 1934, it serves as a memorial to the Liberation of Bulgaria. ……

xxxxx…… In the general uprisings against Turkish rule, the part played by the Montenegrins, a people known for their “dignity and bravery”, gained international fame. The English poet Lord Tennyson referred to them as “a race of mighty mountaineers” in his poem of 1877 entitled Montenegro, and the English statesman William Gladstone called them “a bunch of heroes such as the world has rarely seen”. ……

xxxxx…… To this day the people of Bulgaria refer to the Russian Tsar Alexander II as Czar Osvoboditel, “Tsar Liberator”. There are statues of him in cities throughout the country, including an imposing one in the centre of Sofia, the capital. 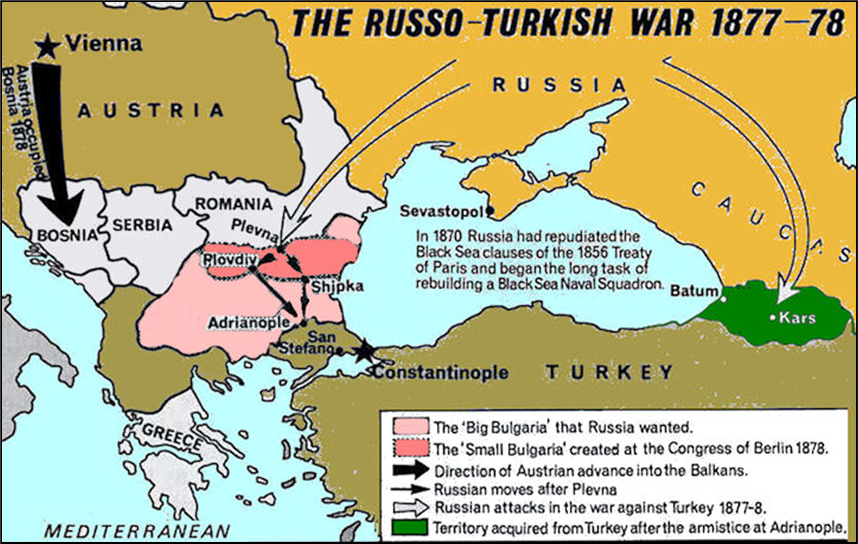