xxxxxThe German Jean Henri Riesener was a pupil of the famous furniture maker Jean François Oeben and took over management of his workshop when he died in 1763. He completed the desk Oeben began for the king in 1760, and when Louis XVI came to the throne in 1774 he became the royal cabinetmaker. Like his master he was an exponent of the rococo style early in his career, producing furniture with curved lines and extravagant adornment, but in the service of the king he turned to the straight lines and restrained decoration of the neo-classical design. He became the foremost cabinetmaker in France, but demand for his work fell away during the French Revolution. In his hands, and those of his master, marquetry (inlaid work in wood) reached the height of its perfection. 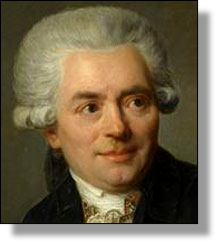 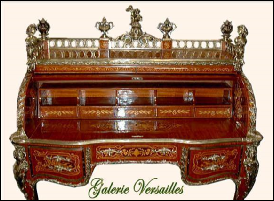 xxxxxThe German Jean Henri Riesener, joined the Paris workshop of the celebrated furniture maker Jean François Oeben in 1754. When Oeben died nine years later, he not only took over management of his workshop, but also married his widow in 1768. He came to the notice of the king, Louis XV, by completing and delivering the famous bureau du roi (king's desk) which his master had started in 1760 and left unfinished (illustrated here). With the coming to the throne of Louis XVI in 1774, he was appointed royal cabinetmaker and, generously favoured by the young queen, Marie Antoinette, was kept busy providing exquisite furniture for the royal palaces, or fulfilling commissions for Madame du Barry, the late king's mistress. 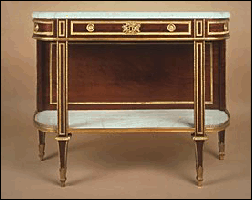 xxxxxLike his former master, he was an exponent of the rococo style during the early part of his career, excelling in the production of furniture with ample curves and covered in a feast of surface decoration - including gilding, carving and intricate pictorial marquetry with gilt bronze mounts. Indeed, in his hands - and those of his master before him - marquetry (inlaid work in wood) reached the height of its perfection. Note the roll-top desk illustrated above. However, in the service of the king, his style became less ornate. He turned to neo-classical design: straight lines, a refinement and harmony in decoration and scale, and plain wood veneers - though he sometimes used mother-of-pearl or lacquer to embellish surfaces. It was a restrained style, much inspired by the findings then being made during the excavation of the buried Roman centres of Pompeii and Herculaneum. Note the refined simplicity of the console table illustrated above.

xxxxxA cabinetmaker with whom Riesener competed was the German David Roentgen (1743-1807). On taking over his father's business near Cologne in 1772 he quickly increased his clientele, first in Hamburg and then in Paris. By 1779 he had a flourishing trade and was providing furniture for the king of France, Louis XVI, and his wife Marie-Antoinette. Later both Catherine the Great of Russia and Frederick William II of Prussia became good customers. At first his style followed that of his father, but like his rival Riesener, he moved from the ornate Rococo style to the simple refinement of neo-classicism with the change in popular taste. With the coming of the French Revolution his workshops in Paris and near Cologne were sacked and this virtually put an end to his business. 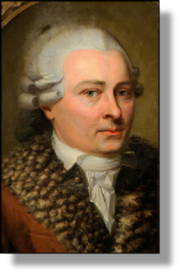 xxxxxA German cabinetmaker who competed with Riesener was David Roentgen (1743-1807). He succeeded as head of the family workshop at Neuwied, near Cologne, in 1772. and at once set about widening the scope of his father's business. He proved highly successful. He first found buyers in Hamburg and then, turning his attention to Paris in 1774, was inundated with orders. Within five years he was providing top-quality furniture for King Louis XVI and his wife Marie-Antoinette. Furthermore, once appointed to the corporation of Paris cabinetmakers in 1780, he was able to build up a stock of furniture in the capital in order to meet the growing demand. He was soon supplying furniture to both Catherine the Great of Russia and Frederick William II of Prussia. 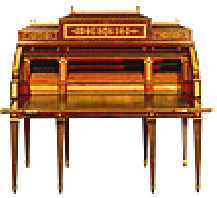 xxxxxAt first, like his father, and, indeed, his major rival Riesener, he practised the Rococo style with its curves and ornate carvings, its florid decoration and its intricate inlay work. In the mid 1770s, however, in response to a new vogue, he began producing furniture along straight classical lines and this fresh, elegant style sold well. And like a variety of pieces produced earlier by his fellow countryman Jean François Oeben, many of his writing tables and desks contained hidden compartments, cleverly revealed by the use of ingenious locks and other mechanical devices.

xxxxxDuring the reign of Louis XVI, Riesener was the foremost cabinet maker in France, but - not surprisingly - demand for his work was almost non-existent during the troubled years of the French Revolution. There was no place for such finery. In the opening years of the 19th century, however, he did obtain some work, notably in the field of restoration.

xxxxxWith the coming of the French Revolution in 1789, however, his business was badly hit, and when the French army prepared to cross the Rhine in 1795, Roentgen had to move his work force and stock further inland. Eventually his workshops in Paris and at Neuwied were looted and destroyed, bringing production to an end. 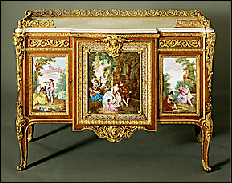 xxxxxIncidentally, another well-known cabinet maker at this time was the Frenchman Martin Carlin (c1730-1785). He excelled in producing furniture which was highly lacquered and decorated with plaques of Sèvres porcelain.