xxxxxThe able Cardinal Richelieu was chief minister to King Louis XIII of France from 1624 until his death. He used his total authority to establish his monarch’s absolute rule, ruthlessly crushing the Huguenots and nobility at home, and reducing the size of Habsburg territory abroad. He rigorously enforced justice and taxation throughout the country, and in 1628 seized the Protestants’ last stronghold at La Rochelle. To reduce the power of the Habsburgs of Spain and Austria, he supported the Protestant Dutch, Danes and Swedes in the Thirty Years’ War, and in 1635 actually went to war with Spain. By the Peace of Westphalia in 1648 France gained much of Alsace, and emerged as the major European power. He encouraged exploration overseas, whilst, at home, as a patron of literature and the theatre, he founded the Académie Française, and did much to ensure the development and purity of the French language. 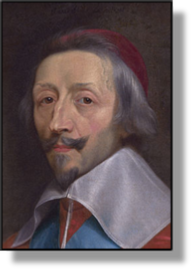 xxxxxCardinal Armand Jean du Plessis de Richelieu, to give him his full title, was chief minister to King Louis XIII of France from 1624 until his death. As such, he was entrusted with total authority, and he abused it only in the service of the Crown. He is remembered above all for his ruthless determination to establish his monarch's absolute rule, crushing the political power of the Huguenots and nobility at home, whilst cutting down the size of the Catholic Habsburgs abroad. Few European monarchs can boast of a more able, devoted and successful servant to their cause.

xxxxxHe was born in Paris of a noble family and, after entering the church, was made Bishop of Luçon in 1606. As a member of the States General he won the favour of Marie de Medici, the regent and queen mother, but was dismissed when the king dispensed with his mother's rule in 1617. He regained favour by being a peacemaker between Marie and her son. He was made a cardinal in 1622 and chief minister to the king two years later. In this capacity he virtually became ruler of France. A highly intelligent, hard-working man, obsessed with creating good order, and possessing an extraordinary will-power, he was to prove the architect of his country's greatness.

xxxxxIn 1628, determined to put an end to a spate of rebellions by the Huguenots (Protestants), he sent government troops to capture their stronghold of La Rochelle, the last of the fortified cities granted to them by the Edict of Nantes - the compromise settlement which had brought an end to the French Wars of Religion in 1598 (L1). Then,xby the Peace of Alès the following year, he deprived them of their last vestige of power and privilege by stripping them of their military means of self defence. This drastically curbed the influence of the Huguenots, but his high-handed means of achieving it made him enemies amongst the nobility and even within the Catholic party. A number of conspiracies were formed against him - often supported by the king's brother, Gaston d'Orléans - and he was faced with an almost continuous state of revolt in the provinces, caused by the high taxation necessary to keep France active in the Thirty Years' War. But he survived all such trials and tribulations. Having made himself virtually indispensable in the service of the Crown, the king's support never wavered. 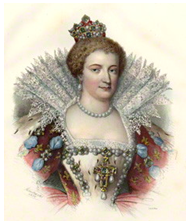 xxxxxTo keep a check on such disorder, he employed "Intendants", specially appointed commissioners whose job it was to oversee all matters of state in their district and report back to the central authority. Under them, justice was ruthlessly meted out, and the collection of taxes was rigorously enforced. Meanwhile, the nobility were hemmed in by royal edicts and, with the aid of the royal army, were deprived of their family strongholds and fortresses. And he dealt equally as well with intrigues within the royal family. In 1630 he overthrew the conspiracy of the queen mother, Maria de Medici (illustrated), when she attempted to have him expelled from office. Louis banished her to Compiègne, but she fled the country and ended her days in Cologne, a poor and lonely figure. And such was Richelieu's influence, that he even persuaded the king to sanction the execution of his young favourite, the Marquis de Cinq-Mars, once he had been convinced of his close friend's treachery.

xxxxxIn foreign policy, he ensured good relations with England by arranging a marriage between the king's sister, Henrietta Maria and the Prince of Wales (later Charles I). But his major aim was to reduce the power and extent of his country's main rival, the Habsburg Empire of Spain and Austria. To this end he willingly supported the Protestant Dutch, Danes and Swedes during the Thirty Years War, and backed uprisings against the Spanish in Catalonia and Portugal. After the death of Gustavus Adolphus, killed at the Battle of Lutzen, he took France into the conflict, declaring war on Spain in 1635 and receiving the blessing of the pope, Urban VIII. With the Peace of Westphalia in 1648 France gained much of Alsace, and emerged as the most powerful country in Europe.

xxxxxIn the academic field as opposed to the battlefield, Richelieu, a patron of literature and the theatre, is gratefully remembered for his founding of the Académie Française (French Academy), the most famous of the five learned societies that make up the Institute de France. On being granted its charter by Louis XIII in 1635, Richelieu specifically asked that the academy concentrate their efforts on "the development, unification and purification of the French language", and, by the continual revision of the Dictionnaire, this remains their major task today. Richelieu also did much to encourage exploration - notably in Canada and the West Indies - and was responsible for building up a French fleet in the Mediterranean and the Atlantic.

xxxxxUpon his death in 1642, Richelieu was buried at the Church of the Sorbonne, Paris, where his baroque-style tomb, the work of the French sculptor François Girardon, was begun in 1675. He was succeeded by Cardinal Jules Mazarin, who became closely associated (very closely according to some accounts!) with the king's wife Anne of Austria when she became regent for her five-year-old son, the future Louis XIV. He continued Richelieu's policies, but was less adroit and, as we shall see, soon found himself engulfed in the civil wars of The Fronde from 1648 to 1653.

xxxxxIncidentally, Louis XIII had little time for his wife, Anne, and in 1625 the Englishman George Villiers, the 1st Duke of Buckingham, caused a scandal at the French court by confessing his love for her. It was around this incident that the French novelist Alexandre Dumas wove his historical novel The Three Musketeers, published in 1844. These three swashbuckling soldiers, together with the dashing D'Artagnan, take on the soldiers of Cardinal Richelieu who, for most of the story, is the villain of the piece. ……

xxxxx…… Richelieu'sxxsecretary and confidant, Father Pierre Joseph, was the original "Grey Eminence" (Éminence grise) - a person who exercises power behind the scenes. A French Capuchin friar named François Leclerc du Tremblay, he quietly worked in the background on sensitive diplomatic missions. It may well have been on his advice that France entered the Thirty Years' War following the failure of the Swedish intervention. The English novelist Aldous Huxley wrote a book with this title in 1941. The nickname refers to the colour of the friar's habit - grey. For the same reason, Richelieu was sometimes known as his "Éminence rouge".