xxxxxAs we have seen, Elizabeth I’s strict enforcement of the Acts of Supremacy and Uniformity led to a series of Irish rebellions. Then James I’s “plantation” policy gave much Irish land to English and Scottish “colonists”. Thus when Charles I and Parliament headed for a showdown in 1641, the Irish Catholics took advantage of the situation. They rose up under their leader Rory O’More, aiming to capture Dublin and expel the English. In the rebellion, which lasted until 1649, thousands of English settlers were massacred, and a council was formed to govern the country. However, the Irish Catholics became divided in their aims and lost their opportunity. A peace settlement was arranged in 1644 after the king promised that the Roman Catholic Church would be the predominant church in Ireland, and in 1649 Ireland was committed to the royalist cause, then in the person of “Charles II”. But, as we shall see, all this was to change with the arrival in Dublin of Oliver Cromwell in 1649 (CW).

xxxxxAs we have seen, it was Queen Mary who - despite being a Roman Catholic - began the colonisation of Ireland by English settlers. Her half sister, Queen Elizabeth, first attempted a policy of conciliation, much on the lines of her father, Henry VIII, but her strict enforcement of the Acts of Supremacy and Uniformity led to a series of Irish rebellions. This is hardly surprising. Practically the entire Celtic population of Ireland and the majority of people living in the "Pale" in and around Dublin 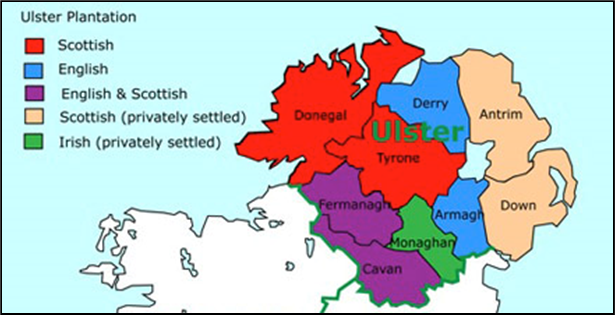 xxxxxAll these religious uprisings were bloody, cruel and destructive affairs, and none more so than that led by Hugh O'Neill, the Earl of Tyrone, from 1594 to 1603. He inflicted a humiliating defeat upon the English at the Battle of the Yellow Ford in 1598 (L1), and then went on to defeat the forces of the Earl of Essex, sent out specifically by Elizabeth to cut O'Neil down to size. It was not until 1603, in fact, that the rebel leader was forced to submit to the English. The first Stuart king, James I, continued Mary's policy of colonisation and gave it the stamp of government approval. His "Plantation" policy (illustrated), begun in Ulster in 1610 (J1), drove out vast numbers of Catholics and gave their land to English and Scottish "colonists".

xxxxxIn the opening years of the reign of Charles I, some vestige of order was restored in Ireland. The Lord Deputy, Strafford, maintained a ruthless grip on Irish affairs, whilst Charles raised money and, later, armies by granting the Roman Catholics what was known as "the Graces", various religious concessions which allowed them to take a more active part in public affairs. However, when Strafford began to abolish these concessions the rot set in. He was eventually executed by popular demand in 1640, and the time then seemed ripe for revenge. As King and Parliament headed for a military showdown, the Irish Catholics took advantage of the situation. In 1641, under the leadership of the Irish chieftain Rory O'More, plans were drawn up to capture Dublin and expel the English.

xxxxxThe revolt which followed lasted until 1649 and went some way towards success, despite early defeats at Kilruch and New Ross. Amongst acts of familiar cruelty, thousands of English settlers were driven out of Ulster or tortured and put to death. Some sources put the figure of those massacred at 30,000, but this is probably an exaggeration. Supported by Roman Catholic lords from within the Pale, the rebels then formed a supreme council to govern the country. In 1644 Charles, concerned at the turn of events, sent the earl of Glamorgan to negotiate a settlement. As a reward for Irish support for the Crown, he went so far as to promise that the Roman Catholic Church would be accepted as the predominant church within Ireland.

xxxxxBut like so many other occasions in the troubled history of this island, Catholic Irish unity could not be maintained. The confederacy formed at Kilkenny in 1642 proved unable to put together a jigsaw of conflicting alliances. In broad terms, the native Celts wanted complete independence for Ireland, whilst the Roman Catholic lords, figures of the establishment, sought only the promise of religious toleration. And alongside the Catholic confederate forces went English parliamentary armies in the north and south of the country, and a Protestant royalist force in possession of Dublin. In 1648, James Butler, the Earl of Ormonde, returned as the viceroy of Charles I. He concluded a peace settlement with the confederacy, and Ireland was committed to the Royalist cause, now in the person of "Charles II". However, as we shall see, all this was to change with the arrival in Dublin of Oliver Cromwell and his army in August 1649 (CW).

xxxxxIncidentally, a cast iron bridge in Dublin, completed in 1859 and named the Victoria and Albert Bridge, was renamed after Rory O’More in 1939.