xxxxxWalter Raleigh, the English adventurer and close friend of Queen Elizabeth, spent much time in organising or leading expeditions to the New World, but he met with little success. He made two unsuccessful attempts to found a colony in North America (1585 and 1587), and a voyage to Guiana in search of gold also ended in failure. However, like Francis Drake, he took every opportunity to attack Spanish ports and shipping in the New World. And at home, too, he did good service in Ireland, gained the favour of Elizabeth, was granted large estates, and knighted. He was appointed captain of the Queen’s guard in 1587, and later became governor of the island of Jersey. But his fortunes changed with the coming of James I. His enemies at court conspired against him, and he was imprisoned in the Tower of London. He was eventually released to go in search of gold for the king, but the venture failed, and for attacking a Spanish settlement he was beheaded on his return to England. Raleigh was not without literary talent. He wrote poetry and a number of books, including adventure stories. He befriended a number of writers, including Christopher Marlowe, John Donne and Edmund Spenser. 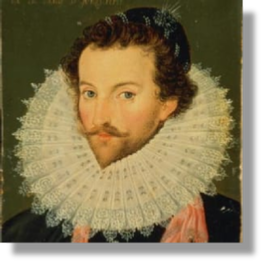 xxxxxThe English adventurer Walter Raleigh, a favourite and close confident of Queen Elizabeth, spent much time in organising or taking part in expeditions to the New World. Unfortunately his efforts bore little if any fruit. He made two unsuccessful attempts to found a colony in North America, and in 1595 he led an exploratory voyage to Guiana, looking for gold but never finding it. However, like Francis Drake he took every opportunity to attack Spanish ports and shipping. In 1592 he fitted out a fleet, commanded by Sir Martin Frobisher, to attack Spanish ships bringing gold from Panama, and he himself took part in expeditions against Cadiz in 1596, and against the Azores the following year.

xxxxxHe was born at Hayes Barton, near Budleigh Salterton in Devon, and attended Oxford University. He fought for a time on behalf of the Huguenots in the French Wars of Religion - still going on - but then returned to London to study law. His voyaging began when he accompanied his half-brother, Sir Humphrey Gilbert, on what was to be a colonising expedition to America. It set out in 1578, but it was ill-equipped and was forced to return home after being attacked and dispersed by a Spanish fleet off the coast of Africa.

xxxxxUndaunted, in 1585 he organised a fleet of seven ships, and this expedition, led by his cousin, Sir Richard Grenville, reached North America and established the first English colony in the New World on the island of Roanoke (off the coast of North Carolina). Unfortunately, this colony failed, despite a 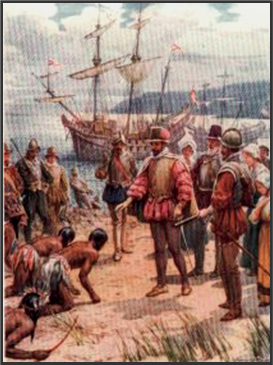 further attempt at settlement two years later. Named Virginia in honour of his virgin Queen, the territory was eventually abandoned, coming to be known as the "Lost Colony" (discussed below). And ten years later a visit to Guiana in search of El Dorado, the legendary land of gold and precious stones, also came to nought, following a journey deep into the interior via the River Orinoco.

xxxxxMeanwhile, however, his fortunes fared substantially better at Court. He had served in Ireland in 1580 and, on the strength of this experience, put himself forward as an expert on Irish affairs. He soon became one of the Queen's favourites and, if the legend is true (and there might be some truth in it!) he did his image no harm by laying his cloak on the ground to prevent the Queen from getting her feet wet! Be that as it may, he was knighted in 1585 and, endowed with large estates and a number of trading monopolies. As a result, he quickly became one of the most powerful men in the land, being appointed captain of the Queen's guard in 1587. However, he did fall out of favour for a short while in 1592 when his secret marriage to one of the Queen's ladies-in-waiting came to her knowledge. He and his wife spent a brief spell in the Tower of London, and he never again enjoyed the Queen's unquestioning support.

xxxxxRaleigh was kindly disposed towards writers. He was a friend of Christopher Marlowe, and the poet John Donne accompanied him on the expedition to Cadiz and the Azores. In 1589 he played an important part in the ultimate success of The Fairie Queen, the major work of Edmund Spenser. He visited the English poet when he was living near Cork, southern Ireland, and, recognising the merit of the poem, he brought him back to England. He had the work published and Spenser presented to the Queen. And Raleigh was not without literary talent himself. During his lifetime he wrote several poems (see one below), and a number of books, such as The Last Fight of the Revenge, a sea battle with the Spanish in which his cousin, Sir Richard Grenville, was mortally wounded, and his Discoverie of Guiana, a romantic account of his gold-seeking expedition to South America in 1595. In this work he described the "golden city", Manoa, as being on an island in Parima Lake, but it was never found! 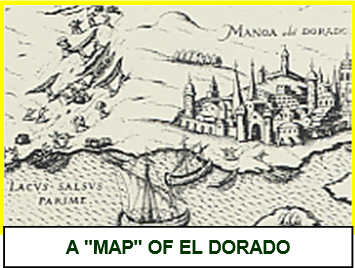 xxxxxHe spent the last three years of Elizabeth's reign as governor of the island of Jersey, but with the accession of James I in 1603, the good life came to an end. The new monarch disliked Raleigh and lost no time in finding him guilty of plotting against the Crown - though this was probably a charge conjured up by Raleigh's enemies at Court. He was sentenced to death, but this was commuted to life imprisonment. He spent thirteen years in the Tower of London, and it was during this time that he wrote his most famous work, the first volume of his History of the World. Then in 1616, having promised the king a fortune if he were allowed to return to Guiana, he was released. But his freedom was granted only on condition that he did not attack the Spanish whilst on his voyage. The venture proved a disaster. Like the previous expedition of 1595, no gold was discovered, and, to make matters worse, his lieutenant attacked a Spanish settlement. This action signed Raleigh's death warrant. On his return he was beheaded in Westminster Palace Yard in October 1618.

Even such is Time, that takes in trust

Our youth, our joys, our all we have,

And pays us but with earth and dust;

Who in the dark and silent grave,

When we have wander'd all our ways,

Shuts up the story of our days;

But from this earth, this grave, this dust,

My God shall raise me up, I trust.

xxxxxIncidentally, he is traditionally credited with introducing the potato and the habit of smoking to England, but so, for that matter, are - among others - Francis Drake and John Hawkins!

and a Colonial Map 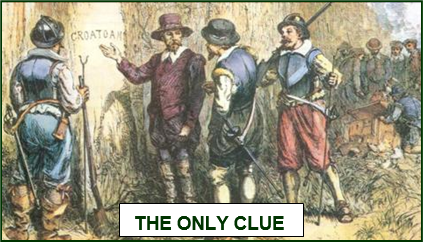 xxxxxSomething of a mystery hangs over the Lost Colony of Virginia, first established by Raleigh in 1585. Roanake Island (12 miles long by 3 miles wide) was chosen as the site for the first English colony in the New World, and, failing to survive, it was re-settled two years later by a party of one hundred led by the cartographer John White. He then returned to England to organise supplies, but his return was delayed by the attack of the Spanish Armada. When he eventually got back to the island in August 1590 everyone had vanished. The only possible clue to their fate was the word "Croatoan" carved on one tree and the letters "Cro" on another. 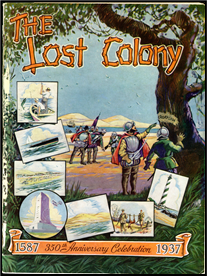 xxxxxThese carved letters have led to the belief that the settlers were not killed by hostile Indians, as first presumed, but took refuge among friendly Indians on nearby Croatan Island - since covered by shifting sands. Somewhat in support of this theory was the claim put forward by a local group of mixed-blood Indians in the 19th century that they were the descendants of the Croatan tribe and the original colonists. Although this claim cannot be substantiated, this group, situated in the south-east corner of North Carolina, has been officially recognised by the state as "Croatan Indians". Since 1937 the drama surrounding the fate of Raleigh's colony of Virginia has been frequently enacted at Manteo on Roanoke Island in an outdoor play by the American playwright Paul Green entitled The Lost Colony (illustrated).

xxxxxNotxin dispute in the brief life of the colony is the birth of Virginia Dare, born on August 18th 1587, about a month after the arrival of the colonists. Daughter of Ananias Dare and his wife Ellinor, daughter of the settlement's leader, John White, she was the first child to be born of English parents in the New World. Her grandfather sailed for England a few days later and, on returning with supplies in 1590, found the colony deserted.

xxxxxIn 1585 Raleigh did manage to found a colony in the New World on Roanake Island. Named Virginia in honour of Queen Elizabeth, it failed to survive, but two years later was re-settled by a party of one hundred. The leader, John White, then returned to England for supplies and when he went back in 1590 everyone had vanished. The only clue to what came to be known as the Lost Colony were the words Croatoan carved on a tree. This has led to the belief that they all settled on nearby Croatan Island - since covered with sand - and today a local group of mixed-blood Indians claim to be the colonists’ descendants.

xxxxxThe English geographer Richard Hakluyt (c1552-1616) was a firm believer in the value of colonies in North America. He strongly supported Raleigh’s project for a settlement in the New World in his treatise of 1584 entitled Discourse on the Western Planting. Today, he is best remembered for his scholarly work The Principall Navigations,Voiages and Discoveries of the English Nation, produced in 1589. In recognition of his contribution to cartography, the Hakluyt Society was established in 1846, tasked with publishing books on exploration and travel. 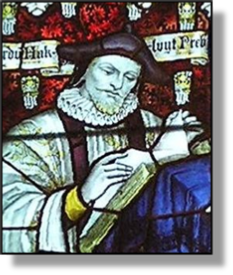 xxxxxThe English geographer Richard Hakluyt (c1552-1616) was a firm advocate of the establishment of colonies in North America. In 1584 he vigorously promoted Raleigh's project for a settlement in the New World in a report entitled Discourse on the Western Planting. This was shown to Queen Elizabeth, though the treatise itself was not published until 1877. He was born in London and educated at Christ Church, Oxford, where he developed his earlier interest in exploration. He later became the university's first professor of modern geography, lecturing on cartography, and he was also geographical advisor to the newly-formed East India Company.

xxxxxHe came out strongly in favour of England setting up colonies in North America in his Divers Voyages Touching the Discoverie of America and the Islands Adjacent, written in 1582 and dedicated to the courtier, statesman and poet Sir Philip Sidney. So successful was this work that he was appointed chaplain to the English ambassador in Paris so that he might obtain information about French and Spanish expeditions to the New World. Today, he is best remembered for his The Principall Navigations,Voiages and Discoveries of the English Nation, produced in 1589. Compiled from the accounts of navigators and explorers, it was the most comprehensive and scholarly study of this subject then available. It was revised and enlarged in 1600 and reprinted as late as 1905. In recognition of his work in the field of cartography, the Hakluyt Society was established in 1846, tasked with publishing books on exploration and travel.

xxxxxBy the year 1585 the Colonial Map of the World looked something like this. At this time the major colonial powers were Spain and Portugal. England did make a settlement in Virginia but, as we have seen, it was later found deserted and became known as the Lost Colony. The map shows some of the voyages of exploration made by English navigators or by seamen exploring on behalf of England. 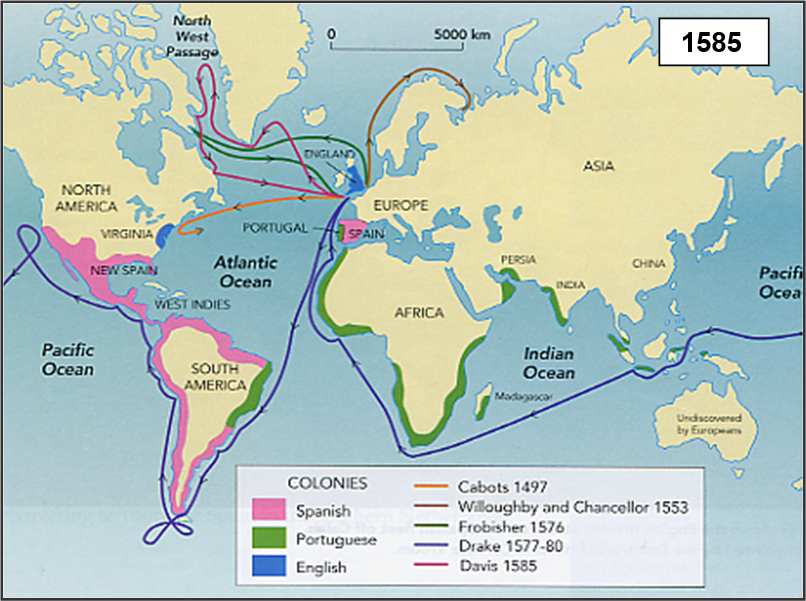