xxxxxAs we have seen, the Constitutional Act of 1791 (G3b) divided the colony into Lower Canada (based on Quebec and mostly French speaking) and Upper Canada (based on Ontario and mostly English speaking). This proved moderately successful. During the War of 1812, for example, both provinces remained loyal to the Crown. Afterwards, however, the emerging middle class wanted democratic reform to overthrow the small privileged cliques which ruled in both provinces, and to improve economic conditions. This unrest led to two uprisings in 1837. The rebellion in Lower Canada was led by the radical politician Louis Joseph Papineau, and the one in Upper Canada by the Scottish reformer William Lyon Mackenzie. Both revolts were quickly put down, but they drew attention to the country’s outmoded constitution. An enquiry into the situation resulted in the Durham Report of 1839. This advocated a union of the two provinces, and this was put into effect by the Union of Canada Act of 1841. This also led to a large measure of self-government within the colony. As we shall see, this union was further expanded by the British North America Act of 1867 (Vb). 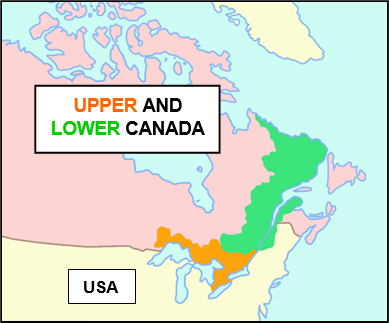 xxxxxAs we have seen, during and after the American War of Independence some 50,000 loyalist fled north from the United States and settled in Canada. Their arrival threatened the political and social stability of the colony. They were soon agitating for their own religious and social systems, together with the political and property rights they had once enjoyed. To avoid a second revolution in North America, and mindful of the large French community within the territory, the British government came up with the Constitutional Act of 1791 (G3b). This produced a solution of sorts by dividing the colony into two provinces along the line of the River Ottawa: Lower Canada (based on Quebec and mostly French speaking), and Upper Canada (based on Ontario and mostly English speaking), each with its own legislature.

xxxxxThough by no means a total solution, this division proved moderately successful for a while. During the War of 1812, for example, both provinces remained loyal. They saw the Americans as the aggressor, and their militia units supported the British army in repelling the invader. Following the war, however, an emerging middle class in both provinces, led by radical elements, began to press for democratic reforms, anxious to overthrow the ruling elites which dominated the running of political, commercial and social life. In Upper Canada, for example, a close-knit oligarchy was modelled on the British aristocracy, and this resulted in an outmoded class structure and a totally unfair distribution of land. In Lower Canada, the ruling elite was made up of a small band of bankers, merchants and shipping agents, all out to keep in control and line their own pockets. And there, matters were made worse by serious economic problems, and the divisions caused by differences in language, religion and culture. 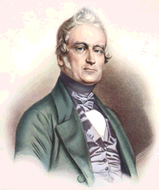 xxxxxThexunrest created by these political and social grievances simmered for some years and then broke out in open revolt in both provinces in 1837. Lower Canada was the first to be affected. There the rebellion was precipitated by the government’s unsuccessful attempt to arrest members of the radical Parti Patriote, together with their leader, the politician Louis Joseph Papineau (1786-1871) (illustrated). As the recognised spokesman for the French Canadians, he had earlier issued 92 Resolutions listing his people’s demands and grievances. These were passed by the assembly but rejected by the governor, so in the November, having escaped arrest, he and his party took on the government forces at St. Denis, near Montreal. They won this encounter, but in subsequent battles at St. Charles and St. Eustache, the rebels were roundly defeated and Papineau was forced to make his escape to the United States. From there he made his way to Paris and remained there until a general amnesty was granted in 1844. 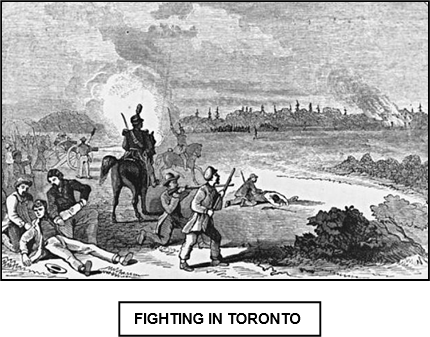 xxxxxInxUpper Canada the leader of the Reform Party was the Scotsman William Lyon Mackenzie (1795-1861) a radical newspaper publisher with whom Papineau had collaborated. The first skirmish here occurred in December 1837, when about 800 of Mackenzie’s men, many of them farmers, were put to flight by government forces in Yonge Street, Toronto. They reformed, but were soundly defeated at Brantford a few days later. Mackenzie also fled to the United States, but later returned to Canada with Papineau. They were both pardoned, but some of their followers were not so fortunate. Some were imprisoned, and a number were executed or deported to Australia.

xxxxxUnsuccessful and short lived though these rebellions were, they did highlight the need for a reform of Canada’s outdated constitution. Inx1838 the British parliament appointed the statesman Lord Durham (1792-1840) (illustrated) governor general of Canada, and charged him with the task of reviewing the situation. Confronted with the threat of further rebellion, particularly in French Lower 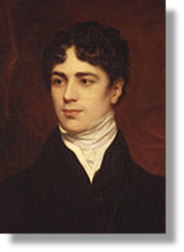 Canada, and fearing that the United States might well view the colony as a possible area of expansion, Durham recommended some sweeping changes. Inxhis memorable Durham Report of 1839 into ”The Affairs of British North America”, he suggested that the two provinces should be united under the title The United Province of Canada, the colony should be granted a measure of responsible government (administered by a “cabinet of colonists”) and that both former provinces should have equal representation in the legislative council, despite their difference in size. Such measures, he argued, would revitalize the country’s economy, bring a greater degree of harmony between its peoples, and unite the nation in the face of a possible threat from the United States.

xxxxxThe British government left somewhat vague the matter of responsible government, but it did accept the union of the two provinces, and passed the Union of Canada Act in 1841. Foreign policy and the matter of international trade remained in the hands of the home government, but, following further agitation, the colonists gained responsibility for internal affairs by 1848. Durham had hoped that his measures would also “anglicise” the French-Canadians, but they had sufficient political power to retain their language and institutions.

xxxxxThe union of Lower and Upper Canada was seen by Lord Durham as the first step in the formation of a federation. In fact, as we shall see, an enlarged “Dominion of Canada”, came into being in 1867 (Vb) under the British North America Act. In the meantime the legislature was removed to Ottawa and a trade treaty with the United States, signed in 1854, eased trade restrictions and put an end to fears of an American take-over bid.

xxxxxIncidentally, the proposals of the so-called Durham Report (which served for many years as a guide to Britain’s imperial policy), were largely based on the unofficial advice of the colonial reformer Edward Gibbon Wakefield (1796-1862), supported by Durham’s chief secretary Charles Buller. Wakefield, who spent five months in Canada in 1838, had earlier advised on the sale of land both in Australia and New Zealand. He was firmly in favour of a greater degree of self-government within the colonies, and had opposed the convict settlements. …… 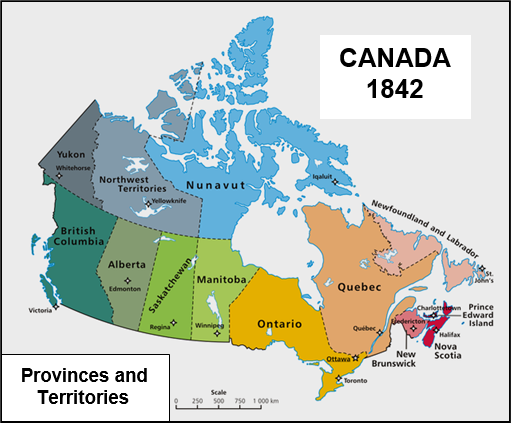 xxxxx…… In his report, Durham hardly endeared himself to the French. Regarding the Canadian problem as two nations at war with each other, he pronounced the French as inferior to the British and “a people with no history and no literature”! ……

xxxxx…… Itxwas in 1842, the year after the Union of Canada Act, that the north-eastern border between Canada and the United States was settled by the Webster-Ashburton Treaty, signed by Daniel Webster, the U.S. Secretary of State and Lord Ashburton, the British ambassador to the United States. This established the present boundary between Maine and New Brunswick. As we have seen, it was in 1818 that the 49th parallel was agreed as the northern border, but its extension to the Pacific Ocean, agreed by the Treaty of Oregon in 1846, only came about after a long, often heated dispute.