xxxxxThe Pueblo People, known earlier as the Basket Makers, settled in south-west North America by about 100 AD. Around 1050 they began a remarkable period of communal living, linking their stone dwellings together and grouping them in the sheltered recesses of the cliff face. Some of the free-standing terraced apartments, three to four storeys high, contained hundreds of rooms. For security purposes, access was by ladder only, the ground floor having no doors and windows and used only for storage. In about 1300 these villages were abandoned and the people moved to the south. The cause for this exodus is not known. It might have been due to severe drought, attacks by hostile neighbours, or conflict from within. They settled in parts of New Mexico and Arizona, but their villages were smaller and their buildings less grandiose. The Spanish arrived about 1598 and soon controlled the area. As we shall see, in 1680 the Pueblo People managed to expel their Spanish masters, but they returned in force in 1692 (W3) and re-imposed their rule. 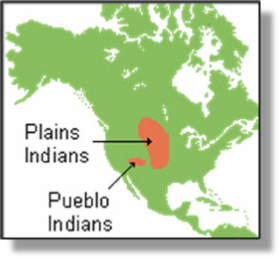 xxxxxThe Pueblo people of the south west region of North America were descendants of the prehistoric Anasazi who by about 100 AD had settled in an area which was roughly in the centre of the present-day states of Utah, Colorado, Arizona and New Mexico. They were known early on as the Basket Makers because of their skills at weaving, but they also produced some fine pottery ware. They lived in caves or shelters made of poles and mud, and dug pits for the storage of food. By about 700 AD these storage pits had developed into underground dwellings or chambers for ceremonial purposes, and stone began to replace the wood and mud dwellings. At the same time, the area covered by their settlements was enlarged to meet the need for more land to cultivate. Hunting was still a necessary occupation, but they now began to grow a wider range of crops, including maize and cotton.

xxxxxIn about 1050 AD - perhaps for security reasons - they began a remarkable period of communal living, grouping their dwellings together in what might be described as communities or villages - Pueblo means village in Spanish. They began to construct great houses, often linked one to another, in the sheltered recesses of the cliff face. Some, like the Cliff Palace in Colorado and the Pueblo Bonito development in New Mexico, might well have contained as many as 200 to 800 rooms. And at the same time they also used hand-hewn stone to erect large, free-standing terraced apartments, some of them as much as three or four storeys high, each level set back so that the roofs of the lower levels provided 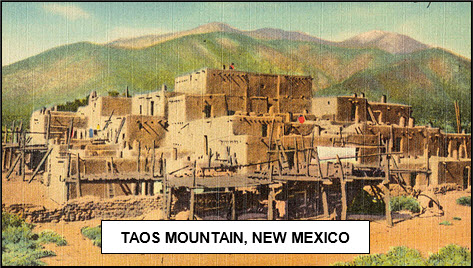 porch space for the rooms or apartments above. And, as a defensive measure, many rooms on the ground level - generally used for the storage of food - were built without doors or windows. Entrance to the “village” was only by ladder, provided, when required, by those living on the level above.

xxxxxThen around 1300 the classical period - those 250 years with which the term “Pueblo” is mostly associated - came to an end. These remarkable cliff villages and high-rise apartment buildings were abandoned. The Pueblo people moved to the south. The reason for this exodus is not clear. The most likely cause was drought and the consequent failure of the crops upon which the natives had now come to depend. It is known that there was an acute shortage of water in this region over some twenty years (1276-1299). In addition, the defence measures adopted would suggest the presence of an external danger. It is possible that the Navago and Apache tribes, who had already moved into parts of their northern territory, were beginning to raid the Pueblo settlements further south. And there is, too, the likelihood of internal conflict, caused by the lack of good leadership and/or the very nature of the crowded, urban society they had themselves chosen to construct.

xxxxxIn their new location, in southern New Mexico and eastern parts of Arizona, they built new pueblos, but the construction never approached the standard reached during the classical period. The layout of the buildings was inferior, as was the stone-work itself. The villages were also smaller in size and located closer to a good water supply. Here they survived as a people, but the Spanish influence began to be felt in the sixteenth century, and in 1598 Spanish occupation began in earnest. As we shall see, in 1680 the Pueblo people managed to expel the Spaniards and gain a period of independence, but Spanish rule was re-imposed in 1692 (W3). The number of their settlements was drastically reduced during these years, but they retained much of their cultural identity and descendants of these people are still to be found living on the sites of these ancient villages