xxxxxIt was Afonso Henriques, Count of Portugal, who, having overthrown his own mother and sent her into exile, set about the founding of Portugal. By 1139 he had won a long war against the Province of León and assumed the title of king. Then, with the aid of some Crusaders who were passing through, he captured Lisbon from the Moors after a siege of four months. By his death in 1185 he had established the new state of Portugal as far south as the River Tagus, and had been duly recognised as its king. 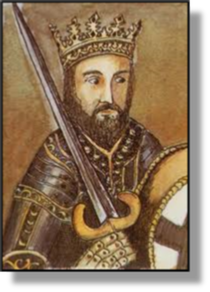 xxxxxWhen the Almoravids swept into Muslim Spain in 1086, Alfonso VI of León and Castile called upon the support of his son-in-law Henry of Burgundy, who was married to his illegitimate daughter Teresa. Given the title of Count of Portugal, from 1095 onwards Henry successfully defended the western area of Alfonso VI's domains which, at that time, stretched down the Atlantic coast as far south as Coimbra. OnxHenry's death in 1112, his wife Teresa took control, adopting the title of Queen of Portugal, but her rule proved unpopular and in 1128 her son, Afonso Henriques (c1109-1185), gaining the support of the most powerful barons in the land, defeated his mother at the Battle of Sao Mamede and, sending her into exile, seized power. 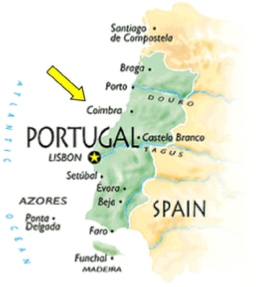 xxxxxInx1139, after a long campaign which ended in a victory at the Battle of Ourique, he secured the independence of Portugal from the province of León and promptly assumed the title of King. Establishing his capital at Coimbra (arrowed), he then set about the task of extending his kingdom southwards. In 1147 he captured the town of Santarém and then, with the aid of a 12,000 strong army of crusaders which was passing through on its way to Palestine, he laid siege to Lisbon. After seventeen weeks the Muslim inhabitants surrendered to the Christian forces and were allowed to leave the city. In addition to a substantial payment, the Crusaders - made up of German, Flemish and English - were given the right to loot the city, and some decided to abandon their mission and settle in the new kingdom of Portugal.

xxxxxLater, crossing the Tagus River, Afonso went on to capture the town of Beja in 1162 and Evora in 1165. These towns were later recaptured by the Moors, but by the time of his death in 1185, he had firmly established the independence of the new state of Portugal. Although claiming to be King in 1139, and proclaimed as such in 1143, his title was not officially recognised until 1179 when he placed Portugal under papal protection. 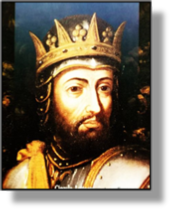 xxxxxAs we shall see, the task of extending Portugal further south was taken up by Afonso III (1248-1279). Following the defeat of the Almohad army at the Battle of Las Navas de Tolosa in southern Spain in 1212 (JO) - a Christian victory that marked the beginning of the end of Moslem power in the Iberian peninsular - he went on the offensive and had conquered the area beyond the River Tagus by 1250. Only hostility from the neighbouring state of Castile then stood in the way of a secure national state, and this was eventually tackled by John I. As we shall see, coming to the throne in 1385, he won a decisive victory over Castile at the Battle of Aljubarrota in 1385 - assisted by some English archers - and then sealed his victory the following year, 1386 (R2), with the Treaty of Windsor, an alliance of peace and friendship with England which remains in force to this day.

xxxxxIncidentally, the name Portugal was very likely derived from Portus Cale, the name the Romans gave to the present-day port and city of Porto.