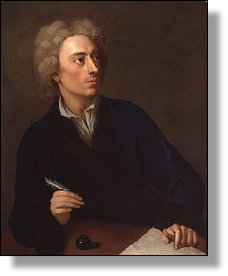 xxxxxPope was born in Lombard Street, London, the son of a linen draper, but two years later, following his father’s retirement, the family moved to Binfield in Windsor Forest. From the age of 12 he suffered from a deformity of the spine, and this stunted his growth. He once described his life as “one long disease”. This, plus the fact that, as a Roman Catholic, he was often discriminated 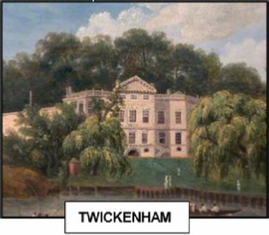 against, might well account for his vengeful attitude towards the slightest criticism, stated or implied, an attitude which, it must be said, he put to good use. Banned from attending university, he was trained at home by Catholic priests, and attended two Roman Catholic schools, but following the accident to his spine, he virtually taught himself - and this makes his contribution to the English language even the more astounding.

xxxxxHe established his reputation as a poet early on with the publication of his Pastorals in 1709, written in imitation of Virgil when, so we are told, he was only 16. Then followed his comic heroic epic The Rape of the Lock, produced in 1712 and revised in 1714. Centred around a feud between two families over the theft of a lock of hair, he uses this trivial incident to launch a satirical commentary, not entirely derogatory, upon the values of upper class society. This placed him firmly on the ladder to 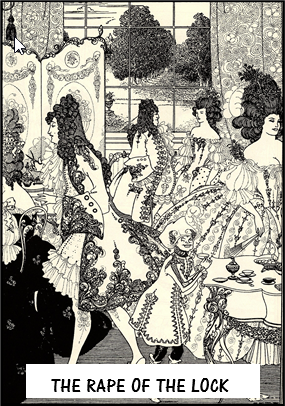 success. Fuelled by an abundance of nervous energy, there followed an immense literary output which continued right up to his death. Notable in these early years are his contributions to the Spectator, and Windsor Forest of 1713, celebrating the rule of Queen Anne in the manner of Virgil.

xxxxxHis translations of Homer’s Iliad and Odyssey, published at intervals and both completed by 1726, were brilliantly achieved, and, proving immensely popular, made him financially independent. It was while involved in this work that he moved to Chiswick and published a collection of his works in 1717. This included his Eloisa to Abelard, based on the tragic love affair between the monk Abelard and his beloved Heloise. It was a year after this that, his father having died, he moved with his mother to his famous villa on the Thames at Twickenham (illustrated above), then a small town outside London. Here he entertained statesmen and many distinguished men of letters. Among his close friends were the writers Jonathan Swift, John Gay, John Arbuthnot. and Thomas Parnell. All were one in their admiration of his wit and mastery of the English language, and all, with him, were members of the Scriblerus Club, formed to ridicule poor literature and pedantry. To this end, they combined their talents to write Memoirs of Martin Scriblerus (not published until 1741), and then he and Swift compiled The Miscellanies, a series of critical reviews which drew a storm of protest when they were published in 1727 and 1728. 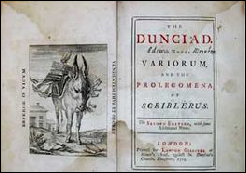 xxxxxBut by that time Pope was ready to begin publication of one of his most impressive works of self defence, The Dunciad. His edition of Shakespeare, published earlier in 1725, though noted for its fine preface, had attracted some harsh comments from a number of scholarly critics, and it was for this reason above all that in 1728 he sought his revenge. The Dunciad, later extended to four volumes, launched a savage but nonetheless brilliant satirical tirade against what he saw as the “dullness” of some of his contemporary writers. Justified or not, these “small wits” (and some not so small!) got the raw edge of his tongue for the hurt they had caused him, real or supposed. Manyxfound themselves in the firing line, but the scholar Lewis Theobald (c1688-1744) took most of the flak. This is hardly surprising. The title of his recent book on the bard read: Shakespeare Restored; or, a Specimen of the many Errors as well committed as unamended by Mr. Pope, in his late Edition of this poet! But quite apart from the quality of the satire, The Dunciad showed Pope’s mastery of the heroic couplet, a form which he perfected. Here, together with one of the many sayings which have come from his writings, is an example of this particular couplet from his Essay on Criticism, a work on the art of writing:

A little learning is a dang’rous thing;

Drink deep, or taste not the Pierian spring. (spring of knowledge)

xxxxxHis Imitations of the Satires of Horace, begun in 1733 and taking five years to complete, continued his attacks on his opponents, but also commented on the political and social scene. Notable among these was his Address to Dr John Arbuthnot of 1735, in which he defended his use of satire, and argued that he was innocent of personal rancour. In the same letter, however, he carried out a devastating character assassination of Joseph Addison (long since dead), singled out for the support he gave to a rival translation of the Iliad in 1715! Also produced at this time were his An Essay on Man and his Moral Essays, philosophical verse which examined in satirical vein the nature and condition of contemporary man. Hisxlast work was the fourth and final volume of what he called the New Dunciad, published a year before his death. Here the poet laureate and playwright Colley Cibber (1671-1757) took the brunt of his attack. He was seen as representing the falling standards of the age. Satire now gave way to prophecy. The debased culture of the city of London, awash with commercialism, would bring about the fall of court and government, and all would end in anarchy - as the last lines would have it:

Light dies before thy uncreating word

And Universal Darkness buries All.

xxxxxBy his total admiration for the writers of classical antiquity, with their regard for order and clarity, Pope was the finest and the last of the poets of the Augustan period in English literature, an age which included writers like John Dryden, Oliver Goldsmith and Samuel Johnson. There then followed a reaction against Neo-Classicism, and Pope’s reputation suffered as a result. With the emergence of Romantic tastes, it was not too difficult, perhaps, to dismiss him as a bitter, twisted man from an age obsessed with the past. Today, however, his outstanding qualities as a poet, and his personal commitment to the preservation of good standards in social and cultural life, have again been recognised. And recognised too, has been his triumph over disability, a disability which, in a strange sort of way, provided the driving force by which he was to prove himself. And this he certainly did.

xxxxxIncidentally, other epigrams which have come down to us from the polished works of Pope are To err is human, to forgive, divine, and For fools rush in where angels fear to tread. ......

xxxxx…… Pope’s Rape of the Lock, centred, as noted, around a feud between two families over the theft of a lock of hair, was modelled on a mock heroic poem by the 17th century French poet and literary critic Nicolas Boileau. His Le Lutrin (The Lectern), completed in 1683, deals with a quarrel between two churchmen over where to place a lectern in a certain chapel. ……

xxxxx…… Thexbitterness generated by Pope’s satirical attacks was very great at times. For example, on accusing the English critic and dramatist John Dennis (1658-1734) of being “bombastic”, Dennis spat back with a savage personal attack, describing Pope as “a hunch-back’d toad” whose deformed body mirrored a deformed mind. The quarrel rumbled on until Dennis’ death in 1734.

xxxxxThe Scottish writer and physician John Arbuthnot (1667-1735) was one of Pope's closest friends, together with Jonathan Swift and John Gay. A man of ready wit, he was a founder member of the Scriblerus Club, and the chief contributor to the club's satirical Memoirs of Martinus Scriblerus, aimed at ridiculing pedantry. His History of John Bull, written in 1712, created the character which has come to typify the English character. He established a successful medical practice, and was appointed as one of Queen Anne's physicians in 1705. He wrote an Essay on Ailments, an Essay Concerning the Effects of Air on Human Bodies, and one of the first works on dieting. 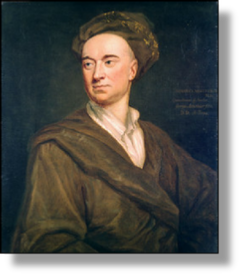 xxxxxThe Scottish writer John Arbuthnot (1667-1735) was one of Pope’s closest friends. A witty, likeable man, he was a founder member of the Scriblerus Club, and the chief contributor to the club’s satirical Memoirs of Martinus Scriblerus. Published in 1741, but probably written much earlier, this was a biting attack upon literary pretension and jargon. He can also claim credit for the creation of John Bull, that “honest plain-dealing fellow” who has come to typify the English character. He makes his appearance in the first of four pamphlets which make up Arbuthnot’s satire History of John Bull, written in 1712 in support of the Tory policy of peace with France. It might well be that the name was in use before the publication of this pamphlet, but it was this work which brought the character to life.

xxxxxOther works include A Sermon Preached to the People at the Marcat Cross Edinburgh, written in 1706 in favour of the Act of Union, Tables of Ancient Coins, Critical Remarks on Dr. Gulliver’s Travels, and, perhaps his most subtle work, The Art of Political Lying of 1712, in the style of Swift but less barbed in tone.

xxxxxIn fact, Arbuthnot was trained as physician. Born at Inverbervie, Kincardineshire, he studied medicine at St. Andrews University, and then set up a highly successful practice. He became a fellow of the Royal Society in 1704 and, a year later, was appointed one of Queen Anne’s physicians. In connection with his medical career, he wrote An Essay on Ailments, an Essay Concerning the Effects 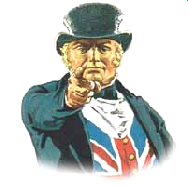 of Air on Human Bodies, and in 1731, according to one authority, published the first book on dieting.

Incidentally, John Bull received a boost to his popularity in the 19th century when the periodical Punch adopted him as a cartoon character. From this association emerges the jovial, portly figure, dressed in a Union Jack waistcoat and with a bulldog at his heel.

xxxxxFrom the age of 12, Pope suffered from a spinal deformity that stunted his growth. This, plus the fact that, as a Roman Catholic, he was often discriminated against, could well account for his embittered frame of mind. He made his name with his Pastorals in 1709, written in imitation of Virgil, and wider success came three years later with his The Rape of the Lock, a comic heroic epic centred around a feud between two families over the theft of a lock of hair. His satirical masterpiece, The Dunciad, was published in 1728. In this work, deeply angered by adverse criticism of his edition of Shakespeare, he launched a bitter tirade against his critics, regarding them as dullards and “small wits”, whether they deserved it or not! Together with his closest friends, Jonathan Swift, John Gay, John Arbuthnot and Thomas Parnell, he formed the Scriblerus Club, aimed at ridiculing poor literature and pedantry. A prolific writer, his many works include brilliant translations of Homer's Illiad and Odyssey, a poem based on the tragic love affair between Abelard and Heloise, and essays on the nature and condition of man. In his final work, the fourth volume of The New Dunciad, he predicted that the drastic decline in literary standards would bring about the fall of government and court, and that all would end in anarchy. As the last poet of the Augustan period in English literature, Pope deeply admired the writers of antiquity, holding dear their regard for order and clarity. His ability as a satirist aside, in his superb use of verse he perfected the heroic couplet, the form in which most of his work is written.