xxxxxIt was in August 79 AD that the huge volcano of Vesuvius, overlooking the city of Naples in southern Italy, erupted violently. Eventually the nearby settlements of Pompeii, Herculaneum and Stabiae were completely covered in a layer of lava, pumice and ash some twenty feet deep. The 2,000 or so inhabitants who did not escape were suffocated, and the area was abandoned. It was not, in fact, until 1592 that evidence of the disaster was uncovered, and not until 1748 (G2) that excavation began in earnest. Many of the buildings were then found preserved under the ash, together with human and animal fossils, and this gave a remarkably realistic picture of life there in the first century AD. 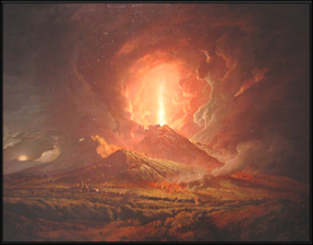 xxxxxThe ancient city of Pompeii, situated just thirteen miles south-east of Naples in southern Italy, was conquered by the Roman general Sulla in 89 BC. By the first century AD it had become a thriving port and town with close on 20,000 inhabitants. It was during this century that disaster struck. ThexRomans had always believed that Vesuvius, the huge volcano which overlooked the town, was extinct, and continued to believe so even after an earthquake destroyed a part of the city in 62 AD. Work on restoring the damage caused at that time was hardly finished when, seventeen years later, in August 79 AD, Vesuvius virtually blew its top. In this violent eruption the whole of Pompeii and two other nearby centres, Herculaneum and Stabiae were completely covered in lava and volcanic ash. 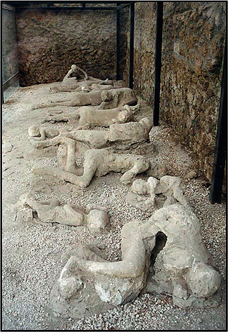 xxxxxA description of this disaster is contained in two letters written by the Roman lawyer Pliny the Younger to his friend, the historian Tacitus. In these letters he gives a dramatic, eyewitness account of this tragic event. Within two days the city was covered in a layer of lava and pumice over nine feet deep. This was accompanied by a massive fall of ash, adding another layer of about the same depth. Those who did not manage to escape, or who chose to remain in their homes - estimated at about 2,000 - stood no chance of survival, most of them being suffocated by the gigantic cloud of dust that descended on the city (illustrated). So deep was the volcanic debris and ash that covered Pompeii and the other two towns - some twenty feet or more - that apart from some rummaging for valuables early on, the sites were quickly abandoned. It was not, in fact, until fifteen hundred years later, in 1592, that the city - or what remained of it - was discovered.

xxxxxThe excavation of Pompeii did not begin until 1748, and it was not until 1763 that an inscription was found to prove that it was, in fact, the ancient Roman city! Excavation has continued intermittently until the present day, and it is now estimated that something like three-quarters of the site has been revealed. As we shall see (1748 G2), the work of the archaeologists has provided a remarkably realistic picture of life in an Italian provincial city in the first century AD. This is because the vast quantities of ash and cinder which covered the site helped to preserve many of the city's buildings - temples, baths, theatres and private dwellings - and also provided human and animal fossils from which individual people and animals, such as dogs, could be recreated in life-like form.

xxxxxIncidentally, the English poet Percy Bysshe Shelley visited Pompeii around 1820. This is a short extract from a poem he wrote afterwards:

I stood within the city disinterred,

Of Spirits passing through the streets, and heard 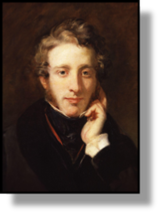 The mountain’s slumberous voice at intervals

Thrill through those roofless halls. ……

xxxxx…… Later,xin 1834, the English politician and writer Edward Bulwer-Lytton (1803-1873) wrote his historical novel The Last Days of Pompeii. His Harold, the Last of the Saxon Kings was published in 1848. He was a friend of the British prime minister Benjamin Disraeli.

xxxxxThe rediscovery of the site of Pompeii in 1592 was made by the Italian architect Domenico Fontana (1543-1607). He had just been appointed the royal engineer at Naples in the service of the Count of Miranda, and he was probably overseeing work on the building of an underground waterway outside the city when he unearthed some remains. His major contribution to Naples was his design for the royal palace. Work on this was begun in 1600. 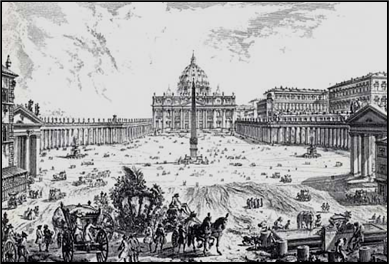 xxxxxToday, Fontana is best remembered for his work in Rome, where he was architect to Pope Sixtus V for five years. During this time (1585 to 1590), apart from designing the Vatican Library and the Lateran Palace, he collaborated with his fellow countryman, Giacomo della Porta, in completing the dome of Saint Peter's Basilica, broadly based on plans by Michelangelo. He was also responsible for erecting the Egyptian obelisk which now stands in St. Peter's square (illustrated). This obelisk had been brought to Rome in the first century AD and had hitherto stood at the side of the Vatican. And it was Fontana who gave Rome a new city plan, laying out avenues to link up the major churches, planning piazzas as meeting places, and providing obelisks as focal points. His emphasis on link roads and large squares influenced the design of future urban development, and can be seen in Wren's plans for London, drawn up following the Great Fire of 1666 but never used.

xxxxxThe discovery of the ancient site of Pompeii was made by the Italian architect Domenico Fontana (1543-1607) when he was working on an underground waterway just outside Naples. Today, he is best remembered for his work in Rome during the late 1580s. He designed the Vatican Library and the Lateran Palace, and he helped to complete the dome of St. Peter’s Basilica. And he was the architect who erected the Egyptian obelisk which now stands in St. Peter’s square, and drew up the plans for the new layout of the city. His ideas influenced the design of future urban development.