xxxxxThe city of Pompeii, near to Naples, southern Italy, had been buried deep by the eruption of Mount Vesuvius in 79 AD. As we have seen, its location was not discovered until 1592 (L1), and excavation of the site - poorly conducted and often by treasure hunters - was not begun until 1748. Many art treasures have since been recovered from the ruins of the city and the nearby town of Herculaneum. A controlled and well-documented programme of excavation was started in 1860, and since that time cement casts have been made out of some of the 2,000 humans who died in the tragedy. As we shall see, the findings reawakened an interest in all things classical - jewellery, decor, furniture and architecture. This is particularly to be seen in the work of the English pottery designer Thomas Wedgwood and the Scottish architect Robert Adam (1762 G3a).

THE EXCAVATION OF POMPEII 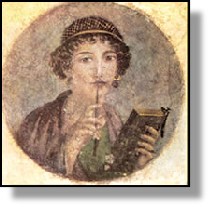 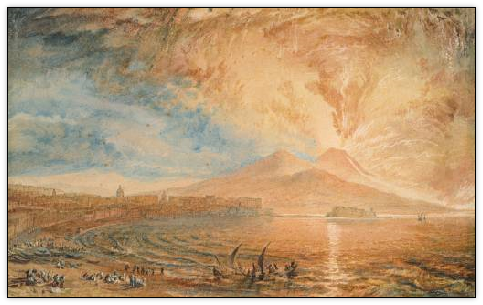 xxxxxBy the beginning of the Christian era, the city of Pompeii, just 13 miles south of Naples in southern Italy, was a thriving port with a population of some 20,000. In August 79 AD, Vesuvius, the volcano which overlooks the city, suddenly erupted. There followed a gigantic fall-out. Within two days the whole of Pompeii and the two nearby towns of Herculaneum and Stabiae were buried in a layer of lava and pumice over nine feet deep. This was followed by a layer of ash of about the same depth. Those who could not escape, or chose to remain in their homes, some 2,000 in all, stood no chance, the vast majority dying from suffocation.

xxxxxSo deep was the city and surrounding area buried beneath the debris, that the sites were quickly abandoned. As we have seen, it was not, in fact, until 1592 (L1), that the Italian architect Domenico Fontana, then the royal engineer at Naples, stumbled upon some remains and awakened interest in the tragedy. Even so, excavation with any serious intent did not begin until 1748, and fifteen years elapsed before an inscription was found (reading rei publicae Pompeianorum) to prove that the site was indeed that of the ancient city of Pompeii. However, work at Herculaneum had been started earlier. In 1709, while sinking a well, part of the stage of the town's theatre was discovered. Regular digging was begun in 1738, and a large amount of art work was found, such as paintings and statues in bronze and marble. In addition, in 1753 scrolls of papyri on various philosophical subjects were recovered from a suburban villa - since named "the Villa of the Papyri".

xxxxxWork on clearing the site has been carried on intermittently ever since. The removal of vast quantities of ash and cinder has proved a formidable task, but, at the same time, the nature of the debris has done much to preserve many of the city's public buildings and private dwellings, as well as fossilising human and animal remains. The baker’s shop, for example, had loaves on the shelves, and large wine jars were found in the tavern. It is estimated that, so far, three quarters of the ancient site has been uncovered. Systematic excavations were begun in 1808 during the time of Napoleon but were abandoned seven years later. Since 1860, when the Italian archaeologist Giuseppe Fiorelli (1823-1896) became director of the excavations, the site has been divided into nine regions and all work has been carefully documented. And from that time much success has been achieved in the making of cement casts out of the disintegrated bodies of both humans and animals. Work on the site was interrupted during the Second World War, but was resumed in 1951.

xxxxxThese excavations provided a remarkable insight into the life of a Roman city and town in the first century AD. And the findings also had a marked effect on art over the next thirty years or so. Jewellery, for example, took on the simplicity and sense of harmony associated with the classical age of ancient Greece and Rome. And this new neoclassical style was seen in decorative motifs. The English pottery-manufacturer Josiah Wedgwood, for example, reproduced cameos, medallions and rings based on Greek and Roman models, and adorned his pottery with differently shaped plaques and classical figures in relief. And, as we shall see, these archaeological discoveries played some part in the design of furnishings and the changes in architecture, clearly to be seen in the Louis XVI style in France, and the work of Robert Adam and his brothers in England (1762 G3a).

xxxxxThe German art historian Johann Winckelmann (1717-68) visited both Pompeii and Herculaneum and was concerned about the number of treasure seekers working on the sites. He wrote a number of "open letters" calling for the excavation to be put into more competent hands, and some improvement followed. Winckelmann spent much of his life in Rome, where he ended up as the Vatican librarian. and the man in charge of the Vatican art treasures. His first major work, Reflections on the Painting and Sculpture of the Greeks, published in 1755, did much to reawaken interest in Greek art, whilst his History of the Art of Antiquity, produced nine years later, proved highly influential. It not only contributed to the rise of neo-classicism, but proved a pioneer work in the development of art history as a distinct academic discipline. 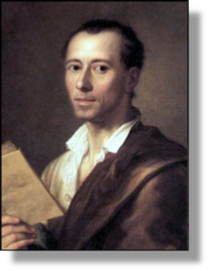 xxxxxIn the early years, the digging at Pompeii and Herculaneum was spasmodic and in no way controlled. Many of those working on the site were treasure seekers. In this respect the German art historian Johann Winckelmann (1717-1768) (illustrated), who did so much to revive interest in classical art, played an important part. After paying visits to both sites, he wrote a number of "open letters" criticising the damage being done by amateur treasure hunters and calling for the excavation to be put into more competent hands. Someximprovement followed, but such vandalism was not fully brought to an end until 1860, when the Italian archaeologist Giuseppe Fiorelli was appointed director of the excavations.

xxxxxWinckelmann was born in Stendal, Prussia, the son of a cobbler. He was educated at the universities of Halle and Jena, and began his working life as a schoolmaster. However, in 1748 he became librarian to Count von Bunau at Nothnitz, near Dresden, and it is here that he acquired an interest in Greek art. This interest in antiquity took him to Rome, where he eventually became the Vatican librarian and the superintendent of the collection of antiquities held at the Vatican. These positions enabled him to make a detailed study of ancient art. and to play a major role not only in reawakening interest in the "timeless" Greek ideal - with its "noble simplicity and tranquil grandeur" - but also in contributing to the rise of neo-classicism in general. 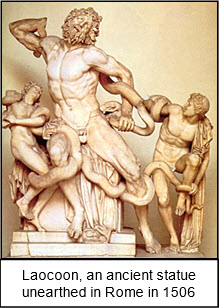 xxxxxHis major works were Reflections on the Painting and Sculpture of the Greeks, written at Nothnitz and published in 1755, and his History of the Art of Antiquity, produced nine years later. These had a marked impact not only on art - particularly painting and sculpture - but also on literature and philosophy. Furthermore, they proved to be pioneer works in 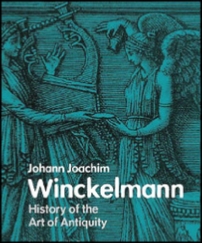 the development of art history as an academic discipline in its own right. In the History, for example, he was the first to define the periods into which Greek art could be divided, and some of his descriptions of individual pieces of art - such as the group sculpture Laocoon - have not been surpassed. Among his fellow countrymen who were influenced by his work were the artist Anton Mengs, the critic Gotthold Ephraim Lessing, and the poet Johann Wolfgang von Goethe. And he numbered among his friends the Swiss artist Angelica Kauffmann and the American painter Benjamin West.

xxxxxStrange to relate, he never visited Greece, though he was invited by friends on a number of occasions. Thus the land and its art remained an ideal for him, and were probably made the more fascinating as a consequence. A mystery surrounds his death, but may be linked with his being a homosexual. He stopped at Trieste while returning to Rome from Venice, and was murdered by a chance male acquaintance. He was buried in the city, in the churchyard of the Cathedral of San Giusto.

xxxxxThe work of the Italian engraver Giovanni Battista Piranesi (1720-78) also played a vital part in reawakening an interest in classical antiquity. His brilliant series of prints depicting the ruins of ancient Rome influenced the growth of Neoclassicism, especially in France and England, as well as awakening an interest in archaeology. The Scottish designer Robert Adam went to see him while visiting Italy. Today, Piranesi is best remembered for his Carceri d'invenzione, a bizarre series of prints conjuring up imaginary prison scenes. Full of gloomy dungeons, lofty vaults and eerie galleries, these flights of fancy had a marked influence on 19th romanticism and, indeed, upon the surrealist movement of the next century. 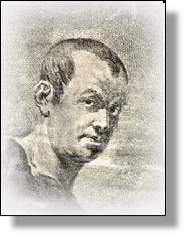 xxxxxAlso reawakening an interest in classical antiquity during this period was the work of the Italian engraver Giovanni Battista Piranesi (1720-78). Born near Venice, he went to Rome in 1740 to work as a draughtsman for the Venetian ambassador. Here he acquired a passionate interest in Roman antiquities, and soon gained a reputation for his large, dramatic prints depicting the classical ruins in the city and its environs. By an intricate and original method of etching, he dramatically intensified the contrast between light and shade, thus highlighting the texture and form of the structure, and capturing as never before the romantic splendour and grandeur of ancient Rome.

xxxxxMany of these technical masterpieces were contained in his two major series, Roman Antiquities of 1756, and his Views of Rome, published as single prints over a period of thirty years, beginning in 1748. These artistic, architectural works did much to influence the growth of neoclassicism in art and architecture, and, at the same time, to awaken an interest in archaeology, especially in France and England. (The print below, left, shows the remains of the Temples of Jupiter and Fortune.) A number of prominent architects visited him in his print shop in Rome, including the English designer Robert Adam, to whom Piranesi dedicated an engraving and a book.

xxxxxToday, this brilliant engraver is best remembered for an earlier series of etchings entitled Carceri d'invenzione (Imaginary Prison Scenes), begun in 1745. These are remarkable for their flights of fancy and romantic imagination, featuring as they do a tangled mass of gloomy dungeons, eerie vaults, lofty ladders, and swirls of stairs and galleries that lead to nowhere (illustrated above on right.). Thus whilst his prints of ancient Rome played a part in the growth of neoclassicism, these bizarre works had a decided influence on 19th century romanticism and, indeed, upon the surrealist movement of the following century.

xxxxxIn all, he produced some 3000 etchings but, as an architect, he also found time to carry out some restoration work for pope Clement XIII, and the romantic Piazza dei Cavalieri di Malta was constructed to his design.