xxxxxThe French painter Camille Pissarro was born in the West Indies and came to Paris in 1855. Influenced by the work of the realists, particularly Camille Corot, he settled in the outskirts of Paris, first at Pontoise and then at Louveciennes, and began painting direct from nature. Through his studies at the Académie Suisse he came to know Claude Monet and became firmly involved in Impressionism. Working alongside Monet, Renoir and Sisley, he adopted the movement’s basic techniques and gained a sound theoretical understanding of this new art form. At the same time, however, he experimented with different styles, and often varied his brushwork and colouring. During the Franco-Prussian War, like Monet, he lived in London, and produced a number of works around his home in Upper Norwood. In the late 1880s, having met Seurat and Signac, he adopted Pointillism, painting in tiny dots of pure colour, but soon found this technique too restrictive. For the most part Pissarro painted simple rural scenes, but in the 1890s, then living at Éragny-sur-Oise, he began a brilliant series depicting city life in Paris, Rouen, Le Havre and Dieppe. Outstanding in this series were his Pont Neuf, and his night scene of Le Boulevard Montmartre. Despite long periods of financial hardship, Pissarro kept faith with the Impressionist movement - unlike some others. He played a major part in organizing the group’s eight expeditions, and Cézanne and Gauguin in particular owe much to his teaching. Regarded today as the doyen of Impressionism, his works included gouaches, pastels, and a wealth of drawings. 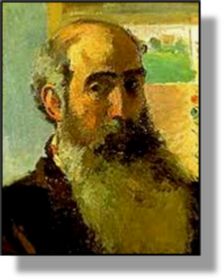 xxxxxCamille Pissarro was born in the Danish West Indies, the son of a prosperous merchant. He was sent to Paris to be educated and returned to work in his father’s business five years later, but having shown an aptitude in art during his schooldays, he was determined to become an artist. In 1853, against his father’s wishes, he took off for Venezuela and spent two years there painting local scenes. Eventually his father relented, and in 1855 the young Pissarro arrived in Paris to begin his chosen career. (Illustrated here is a self-portrait.)

xxxxxIn the French capital - at that time holding its own international exhibition - he was inspired by the works of the realist leader Gustave Courbet and members of the Barbizon School, especially those of Camille Corot, Jean-François Millet and Charles François Daubigny. Following the advice of Corot, whom he met in 1857, he settled in the outskirts of Paris, first at Pontoise and then at Louveciennes, and began painting and sketching rural scenes direct from nature. In the meantime, while studying at the Académie Suisse, he came to know both Claude Monet and Paul Cézanne, disciples themselves of the realist school, and became firmly involved in the Impressionist movement, then in its infancy. Through Monet he came to know Auguste Renoir, Alfred Sisley, Edgar Degas and other members of the rebel group, and in 1866 he met Édouard Manet at the Café Guerbois. It was at this popular meeting place for young avant-garde artists, that Pissarro was later to show his theoretical understanding of Impressionism and, as the accepted doyen of the movement, come to be known as “father Pissarro”.

xxxxxHis earliest canvasses showed a greater concern for pictorial structure than those of Monet and Sisley. His colouring was much less bold, and whilst he sought to capture the transient effects of light and colour, he made little use of broken brush strokes and cross-hatching, and his paint was fairly evenly applied. At this time he was known in artistic circles as “Corot’s pupil”. His Street in Pontoise of 1867 dates from this period. Furthermore, many of his works contained figures and these tended to take over as the subject of the work. Within three years, however, his style had become noticeably more impressionistic, as seen in his The Road to Versailles (Illustrated left below). Having moved to the village of Louveciennes, close to his young friends Monet, Renoir and Sisley, his brushwork became more fragmented, his colours lighter, and his composition less structured, and this freer handling gave his scenes a feeling of freshness and immediacy. His peaceful landscapes of this period, broadly painted and showing a delicate observation of nature, were much admired by the critic Émile Zola.

xxxxxPissarro suffered a stroke in the autumn of 1903 and died peacefully at the age of 73. Throughout his career he won the admiration and affection of his fellow artists both for his well-balanced, warm hearted personality, and for his unrivalled theoretical knowledge as a painter. Over the years he was prepared to experiment with new styles and techniques, but he never strayed from the basic aims of Impressionism, and he was for ever willing to teach young artists the essential characteristics of this new art form. Cézanne and Gauguin, in particular, (not the easiest of men to teach), owed much to his teaching, and in the 1880s he encouraged both Seurat and Signac to exhibit their work in the movement’s independent exhibitions. And these art displays would not have been possible without his enthusiasm and, more importantly, his ability to resolve the tensions that arose within this diverse group of young, ambitious artists.

xxxxxRegarded today as the father figure of the Impressionist movement, he never lost faith in this new art form - as others did - and, despite financial hardship, he never gave up. “One must be sure of success to the very end”, he wrote to his son Lucien, “for without that there is no hope”. During a career spanning fifty years, he produced over 1,600 works. In addition to oils (portraits and still-lifes as well as rural and urban scenes) these included gouaches, temperas, pastels and pencil and ink drawings.

xxxxxIncidentally, for twenty years, beginning in 1883, Pissarro corresponded with his eldest son Lucien, and these letters provide a remarkable insight into the artist’s life and personality. In them he often expressed dissatisf 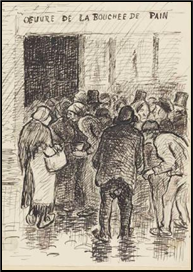 action with his own work - continually beset as he was by problems over style and technique - and there is much written about his struggle against poverty. It is said that at one time Madame Pissarro became so distressed at their shortage of money that she contemplated drowning herself and their two youngest children. ……

xxxxx…… Pissarro excelled at drawing, and in a series entitled Turpitudes Sociales (Social Disgraces), produced in 1889, he used his skill in this direction to highlight the plight of the working classes and the social injustices of his day. There is a large collection of his drawings in the Ashmolean Museum in Oxford. …… 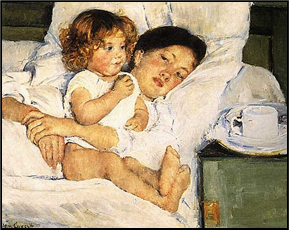 xxxxx…… Another,zless-known member of the Impressionists whom Pissarro helped and encouraged was the American artist Mary Cassatt (1844-1926). She remarked that, as a teacher, he could have “taught stone to draw correctly”. A talented artist in oil, etching and pastel, she settled in Paris in 1874 and, after meeting Edgar Degas, joined the Impressionists. She contributed to four of the movement’s exhibitions, and became particularly noted for her studies of mother and child. Shown here is Breakfast in Bed. A friend of the other female member of the group, Berthe Morisot, she did much to promote Impressionism in the United States.

xxxxxBy the outbreak of the Franco-Prussian War in July 1870, it might be said that his artistic personality had largely taken shape, but his decision to take refuge in London during the conflict brought about further development in his style. There he met up with Monet and together they visited the art galleries and became acquainted with - and influenced by - the works of the British landscape artists Turner, Constable and Cromer. Pissarro took lodgings in South London and it was there that he produced paintings of Crystal Palace and the quiet streets of suburbia in varying weather conditions. His Lordship Lane Station was likely inspired by Turner’s Rain, Steam and Speed. Illustrated above (on the right) is a delightful work entitled Lower Norwood under Snow. And it was while in London that Pissarro married his mistress Julie Vellay (at one time his mother’s maid who had already borne him two children), and met up with Paul Durand-Ruel, a dealer who favoured the Impressionists.

xxxxxOn his return to France in 1871 he found that his house in Louveciennes had been looted by German troops, and that all but 40 of his l,500 paintings had been destroyed. Undaunted, he returned to Pontoise and started afresh in a “spot that has beauty”. Over the next ten years many of his friends visited and painted with him. Among them was Cézanne, the young artist from Provence who joined Pissarro in 1872 and worked and learnt alongside him for two years. In 1874 Pissarro played a leading part in organising the first impressionist exhibition, but this show and the subsequent seven that he took part in and helped to put on, brought no real success for this avant-garde movement. For the majority of the Impressionists this meant long years of financial hardship, but Pissarro never wavered, determined, as he put it, “to tread the path I have chosen and to do my best”. 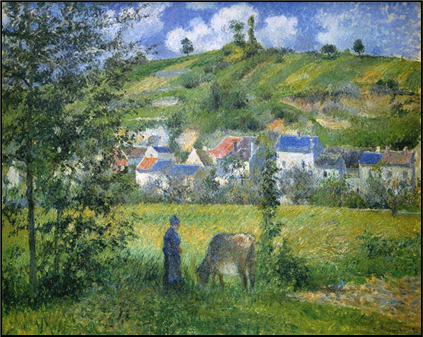 xxxxxDuring the 1870s and 1880s Pissarro kept to simple scenes to be found in villages, small towns and open countryside. These included rows of houses, factories, river banks, trees and peasants labouring in the fields. People or animals often provided the focal point, and form often remained firm, but his colours were strong and on many occasions he captured the sparkling effects of light as in a moment of time. Illustrated here is his Chaponval Landscape of 1880. It was during this period that he worked patiently with the wayward young artist Paul Gauguin, and met up with the Dutch artist Van Gogh.

xxxxxIn 1884 he settled in the small village of Éragny-sur-Oise, and it was soon after this that he made the acquaintance of the so-called Neo-Impressionists Paul Signac and Georges Seurat. Ever prepared to experiment, he then tried his hand at Pointillism or Divisionism, the technique of painting in tiny dots of pure colour. Together with his eldest son Lucien (who was fast becoming an accomplished artist in his own right), he produced a number of works in this style - such as The Apple Pickers and View from my Window, Éragny - but by 1890 he had found that this scientific approach was inadequate “to render life and movement”.

xxxxxIt was from 1890 that he moved largely away from painting rural scenes and, visiting the cities of Paris, Rouen and the seaport towns of Le Havre and Dieppe, began producing a brilliant series of views of urban life, sometimes working on a number of canvasses at the same time - like his friend Monet - to capture the effects of changing light. It was at this time that he began to suffer from a chronic eye infection, but, nevertheless, some of his finest works belong to this late period. Painting from the windows of a succession of rented apartments, he captured as in a fleeting moment, a bird’s eye view of the boulevards, traffic, squares, rivers and bridges of a city or town in motion - the perspective often heightened by an avenue of trees or a “funnel” of receding buildings. Among these works were The Fair at Dieppe, Le Pont Neuf, Place du Théatre Français, Le Boulevard des Italiens, the night scene Le Boulevard Montmartre, and Overcast Day in Rouen, the last two illustrated below. In 1892 a large and successful exhibition of his paintings was held in Paris, organised by Durand-Ruel, and this finally accorded him the international recognition - and the financial security - he deserved.