xxxxxThe Pilgrimage of Grace was a popular uprising against the dissolution of the monasteries and the hardships caused by the enclosure of common land. The protestors seized Lincoln in 1536, but the king refused to negotiate and the rebellion petered out. In Yorkshire, however, a more serious revolt, led by the lawyer Robert Aske, called for a return to papal obedience. York was seized and a truce was agreed in the December. In the New Year, however, many of the rebels had dispersed and royal troops quickly crushed the uprising. Aske was captured and executed along with 200 of his supporters. This was the only major rebellion against Henry's church reforms. Indeed, many people went along with the anti-pope movement. 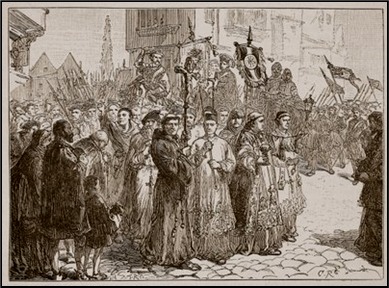 xxxxxThe popular rising known as the Pilgrimage of Grace broke out in 1536. Originating in Lincolnshire and then spreading to Yorkshire, the main causes of grievance were centred around the dissolution of the monasteries and the hardship arising from the enclosure of common land. In October 1536 the rebels seized Lincoln and demanded revenge on the King's minister Thomas Cromwell, then engaged in the dissolution of the monasteries and the task of increasing government control in the North.

xxxxxHenry refused to negotiate with the leaders of this rebellion, and the uprising petered out within three weeks. In Yorkshire, however, opposition was more determined and posed an additional and more serious threat to the state. Led by the lawyer Robert Aske of Doncaster and attracting, we are told, some 30,000 armed men, it also called for the return of England to papal obedience. Following their capture of York in late October, a truce was agreed in December, but fighting resumed the following year when it became clear that the demands of the rebels were not going to be met. By this time, however, many of the rebels had dispersed. The king, having mustered his forces, quickly crushed the movement and captured its leaders. Further outbreaks did follow in Westmoreland and Cumberland, but they lacked strong leadership and were quickly put down. 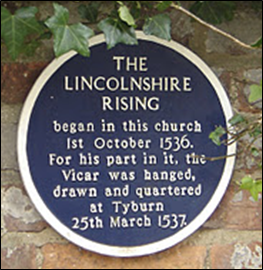 xxxxxFollowing the failure of the uprising, Aske was found guilty of treason and executed, along with more than 200 of his supporters. Then in order to avoid a repetition of such disorder, Henry created the Council of the North, charged with the task of keeping the peace in the northern counties. The Bishop of Durham, Cuthbert Tunstall, was appointed its president.

xxxxxDespite the severity of this rebellion, it must be said that the Pilgrimage of Grace was the only significant opposition shown against Henry's church reforms. Indeed, at the same time, there was a great deal of pro-protestant support. Religious relics, images and shrines were destroyed in abbeys, monasteries and churches throughout the land, and this anti-pope movement was particularly strong in southern England, a prime target there being the shrine of Thomas Becket at Canterbury Cathedral.