xxxxxThe English archaeologist Sir Flinders Petrie spent most of his life in the Middle East. Starting in 1880, he studied the pyramids at Giza and then excavated some thirty sites in Egypt. Among his important discoveries were the temple at Tanis (1884); the Greek trading posts of Naukratis and Daphnae; the famous Fayum mummy portraits at Hawara; the beautiful frescoes and pavements at Amarna; and the Merneptah Stele, a granite tablet which contained the earliest-known Egyptian reference to the land of Israel. He carried out extensive excavations in Palestine from 1927 to 1938 at sites such as Tell el-Jemmeh and Tel el-Farah. He was knighted in 1823 for his services to archaeology, not only for his important findings, but also for his contribution to methodology. His painstaking recording and his method of establishing the history of a site by the examination of pottery fragments, set new standards in archaeology. He wrote nearly one hundred books, including The Method and Aims of Archaeology and Seventy Years in Archaeology. 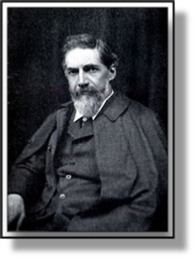 xxxxxThe English archaeologist and Egyptologist Sir Flinders Petrie spent much of his working life in Egypt and The Levant. Over a period of forty years, starting in 1880, he studied the pyramids at Giza and excavated some thirty sites - including those at Tanis, Naukratis, Amarna and Abydos. During this time he made a valuable contribution to the methodology of field excavation, and pioneered a valuable dating system based on the identification of the pottery associated with various ancient cultures. From 1927 to 1938 he worked in Palestine, notably at the ancient city of Lachish. He was professor of Egyptology at the University of London from 1892 to 1933 - the first chair in this subject - and in 1894 he founded The Egyptian Research Account, an institution which became the British School of Archaeology in Egypt in 1905 and remained in being until 1954. Among his books - nearly one hundred in number - are The Method and Aims of Archaeology of 1904, and Seventy Years in Archaeology, published in 1931.

xxxxxPetrie was born in Charlton, near Greenwich, now part of South-East London. His father was a civil engineer and surveyor, and his mother had a knowledge of fossils and natural minerals. Both encouraged their son to take an interest in archaeology and all things ancient. He was largely self-taught, but his father gave him a good grounding in surveying, and as a young man he travelled across the country visiting ancient sites. He became particularly interested in Stonehenge, and after a close study of this prehistoric monument, he set out his findings in a work entitled Stonehenge: Plans, Description and Theories, published in 1880. This proved highly valuable as a basis for further research. And it was in that same year that he made his first visit to Egypt and, living in a cave at Giza, began a systematic survey of the Great Pyramid and the two smaller pyramids nearby. For some two years, working slowly and meticulously, he sought to understand their geometry and the method by which they were built. Much of his data, particularly regarding the pyramid plateaux, remain valid to this day. 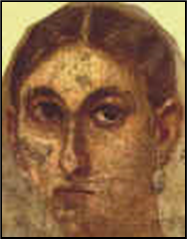 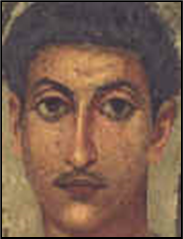 xxxxxHis work at Giza marked the beginning of forty years of dedicated work which took him all over Egypt and much of Palestine. During this long period of painstaking research he made a number of outstanding discoveries. In the Nile Delta, for example, he carried out diggings at the great temple in Tanis in 1884, and it was there that he discovered pieces of a colossal statue of Ramses II, king of Egypt from 1303 to 1213 BC. Then over the next two years he unearthed the ancient fortress towns of Naukratis and Daphnae. It was during these excavations that, having uncovered fragments of painted pottery, he recognised the civilization to which they belonged, and was able to prove that both these settlements were ancient Greek trading posts. This idea of studying and comparing pieces of pottery at various levels of an excavation, pioneered by Petrie, became a valuable means of reconstructing the history of an area. Pottery discovered at Naukratis assisted in tracing the early development of the Greek alphabet, and threw light on the trading carried out by a number of Greek states around the 6th century BC. At Daphnae he uncovered a massive fortress built by Pharaoh Psamtik I a century earlier.

xxxxxLater, while working in the Al-Fayum region in the late 1880s, he found jewellery belonging to a princess of the 12th dynasty (around 1880 BC) at Illahun, and at Gurob he unearthed a large number of papyri and Aegean pottery that confirmed dates relating to the Mycenaean and other ancient Greek civilizations. But his greatest find in this area (at Hawara), was the discovery of the famous Fayum mummy portraits, some eighty in number. Painted on wooden boards and depicting the face of a single person (sometimes the head and shoulders) they were placed over the faces of the bodies mummified for burial. Dating from the Roman occupation of Egypt - approximately the first three centuries AD - they had become detached from their mummies and were in a remarkably good state of preservation (two Illustrated above). 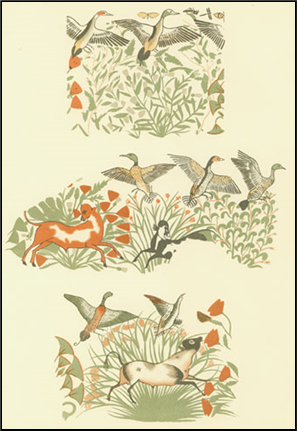 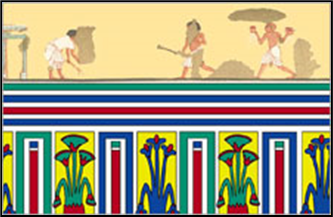 xxxxxIt was while working at Tell el-Amarna in 1891, excavating the city of Akhenaton (the ruler of Egypt from 1353 to 1336 BC) that he found several beautiful frescoes and three painted pavements in the King’s House and the Harem Quarter of the Great Palace. The pavement scenes, one of which was 300ft square, were painted on gypsum plaster and depicted plants, animals and hunting scenes. These were so “astonishingly fresh and clear”, as he recorded at the time, that he built a structure over the top of them to preserve them for posterity. Sadly, the tourists these treasures attracted trampled down nearby crops and the local peasant farmers smashed up the pavements to put end to their unwelcome visitors! It is only through Petrie’s documentation of these frescoes and pavements, recoded in black and white and colour drawings, that provides an idea of their original state. On the left are the designs on the painted gypsum pavements, and on the right is a wall painting, placed above a reconstruction of the painted 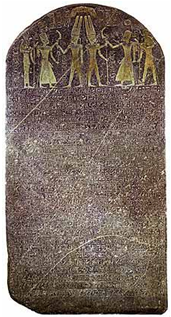 xxxxxBut Petrie’s richest find historically was his discovery of the Merneptah Stele. Found at the ancient city of Thebes (near today’s Luxor) in 1896, this upright stone tablet, made in black granite and over ten feet in height, contained an inscription on its reverse side by the Ancient Egyptian King Merneptah, who reigned from 1213 to 1204 BC. For the most part it recorded his successful defence of Egypt against a powerful invasion by the Libyans, but it also contained what is thought to be the earliest-known Egyptian reference to the land of Israel (I.si.ri,ar ). For that reason the tablet is often referred to as the Israel Stele. The discovery made newspaper headlines across the world. And while working at Luxor he found a statue of Merneptah himself (the son and successor of Ramses II) and another, beautifully sculptured stele depicting a battle between Amenhotep III and the Nubians and Syrians.

xxxxxPetrie carried out extensive excavations in Palestine from 1927 to 1938, particularly at the ancient city of Lachish (now Tell ed Duweir in Israel) and at the sites of Tell el-Jemmeh, Tell el-Farah and Tell el-Ajjul, but his first visit to Palestine was in 1890. It was then, during a six-week stay at Tell el-Hesi, that, applying his principle of sequence dating (also known as “seriation”), he made his first stratigraphic study - an examination of successive levels - and produced a chronology of this ancient hill site. He then went on to survey a number of tombs in the valley of Wadi al-Rababah south of Jerusalem which dated from the Iron Age and the Roman period. His work at Tell el-Hesi was continued from 1894 to 1897 by one of Petrie’s students, the American archaeologist Frederick J. Bliss (1857-1939). Illustrated here are some of Petrie’s findings:

xxxxxPetrie was knighted in 1923 in recognition of his life-time work in the service of archaeology, not only for the many important discoveries he made in the Middle East, but also because of his contribution to methodology. His painstaking recording of all the results of his extensive surveying and excavation; the new and enduring method he introduced to establish the chronology of a site, based on the examination of pottery fragments; and the meticulous care he took when carrying out the inspection of a site, set new standards in archaeology. It was this highly professional approach, together with his innovations, that earned him the title Father of Modern Archaeology. Together with Lady Petrie he spent the last years of his life in Jerusalem at the American School of Oriental Research. He died of a stroke in July 1942 and was buried in the Protestant cemetery on Mount Zion.

xxxxxHe wrote 97 books and over 850 articles on his research and discoveries. His Methods and Aims in Archaeology, published in 1904, was a particularly valuable work in which he emphasised the importance of a systematic approach to excavation, including the value of photography in the accurate recording of data.

xxxxxIncidentally, Petrie returned to the Al-Fayum region in 1910 and added to his store of panel portraits. Today some 900 of these panel paintings are in existence, the majority from the Fayum region, and among those museums with a number on show are the British Museum, The Louvre in Paris, and the Metropolitan Museum of Art in New York. ……

xxxxx…… In the 1890s Petrie trained a young archaeologist named Howard Carter, the man who in November 1922 discovered the tomb of the young king Tutankhamun in the Valley of the Kings at Thebes. In 1913 Petrie sold his large collection of Egyptian antiquities to University College London, where it is now housed in the Petrie Museum of Egyptian Archaeology. ……

xxxxx…… ThexEnglish archaeologist Percy Gardner (1846-1937) served as field assistant to Petrie while he was working in Egypt, and his brother Ernest Gardner (1862-1939), also an archaeologist, continued Petrie’s research at Naukratis in 1885, and was Director of the British School of Archaeology at Athens from 1887 to 1895. ……

xxxxx…… On his death in 1942 Petrie donated his brain to the Royal College of Surgeons in London to assist in research, but it was during the Second World War and the German advance towards Egypt delayed its despatch. At one time it was thought to have been lost in transit, but it eventually reached its destination and is now preserved in a large glass jar. …… 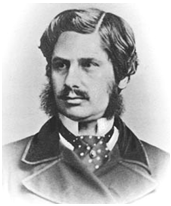 xxxxx…… Itxwas around this time that the amateur archaeologist Augustus Pitt Rivers (1827-1900), a former general in the British army, began investigating ancient sites in his large estate in Cranbourne Chase, Dorset, England. Like Petrie, he carefully measured every finding and kept meticulous records to show where each was found. The excavated material was sent to Salisbury Museum, and his ethnological collection, some 20,000 items, made up the basis of the Pitt-Rivers Museum in Oxford. In 1883 he was appointed the country’s first inspector of ancient monuments.