xxxxxThe Frenchman Louis Pasteur was an outstanding chemist, but his foremost achievements were in biology and medicine. It was in the 1850s, while studying the process of fermentation in the wine industry, that he discovered that yeast which contained elongated cells produced lactic acid and that this turned the liquor sour. In 1858 he recognised that fermentation involved living organisms, but concluded that the production of lactic acid was due to the presence of additional microscopic life, such as bacteria. He showed that these harmful bodies could be destroyed by the application of a controlled heating process, a method now known as “pasteurisation” and used extensively to free dairy produce from the bacteria of tuberculosis. He then took his research a stage further, and in 1860 proved by using a swan-necked flask that whilst bacteria existed in the environment it could do no harm to food it could not reach. This clearly disproved the theory that germs were created in the food itself (spontaneous generation), though it was some time before this theory was fully discredited. Given proof that harmful micro-organisms existed in dust in the air, it was not long before Pasteur connected this fact with the spread of disease. Prior to this, however, in 1865 (Vb) he was called upon to find a cure to a disease attacking silkworms. As we shall see, his solution was to convince him further as to the nature of infectious diseases.

Pasteur: detail, by the American illustrator Robert Thom (1915-1979), contained in his A History of Medicine in Pictures, 1957. Virchow: by the photographer J.C. Schawachter – Academy of Medicine, Toronto, Canada. Schleiden: date and artist unknown. Schwann: from a lithograph by the Austrian artist Rudolf Hoffmann (1820-1882) – Library of Congress, Washington. 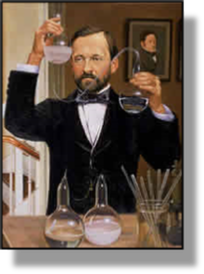 xxxxxThe Frenchman Louis Pasteur ranks as one of the greatest scientists of all time. He was an outstanding chemist, but his foremost achievements were in biology and medicine. He is regarded as the founder of Microbiology - the study of micro-organisms like bacteria - and his development of the germ theory of disease proved a major break through in the advance of medical science. On the strength of his discoveries, he originated the process of “pasteurization”, and, later, produced vaccines for several diseases, including anthrax and rabies. In addition, by dint of his specialised knowledge, he virtually saved his country’s wine, beer and silk industries.

xxxxxPasteur was born at Dole in eastern France, the son of a tanner, but grew up in the small towns of Arbois and Besançon. Onxleaving the Royal College at Besançon in 1842, he studied at the École Normale Supérieure, the teacher-training college in Paris, and it was there, listening to the lectures of the brilliant French chemist Jean Dumas (1800-1884), that he decided to become a scientist. He completed his advanced studies in the physical sciences in 1847, and then lost no time in taking up research and gaining a name for himself. After making a close examination of the crystals which make up paratartaric acid, he presented a paper to the Paris Academy of Sciences in May 1848 in which he reported that whilst the crystals were of the same shape and size, half of them were the reverse (or mirror image) of the other half, and thus each half rotated polarized light in the opposite direction to the other. When the two solutions were mixed together, however, the light remained untwisted. This discovery provided the foundation for a new branch of chemistry known as “polarimetry” whereby the structure of chemical substances can be measured by their effect on polarised light.

xxxxxFor this significant piece of research he was awarded the Legion of Honour and presented with the Royal Society’s Rumford Medal. Furthermore, on the strength of his achievement, he was appointed professor of Chemistry at the University of Strasbourg in 1849, and then Dean of the new science faculty at Lille University in September 1854. It was there that he was asked by a local producer of wine to investigate why the liquor he produced often went sour during fermentation. By means of a microscope Pasteur discovered that the yeast cells in good wine were round in shape, whilst those in sour wine were elongated or rod-shaped in form, and, producing lactic acid, spoilt the liquor. 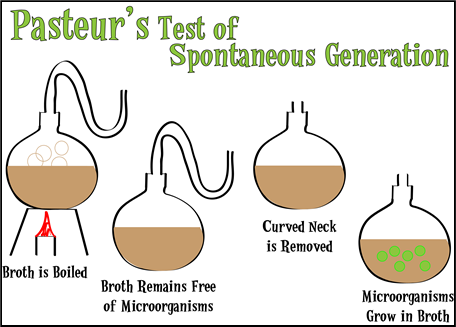 xxxxxIn 1857 Pasteur returned to the École Normale Supérieure as director of studies and it was there that he continued his research into fermentation. In 1858 he determined that this process involved living organisms, but concluded that the production of lactic acid - which soured the liquor - was due to the presence of additional microscopic life, such as bacteria. These, he showed, could be destroyed by the application of a controlled heating process, a method now known under the term “pasteurisation” and used extensively to free dairy produce from the bacteria of tuberculosis.

xxxxxHe then took the experiment further to find out how this microscopic life - bacteria - evolved. In 1860 he proved that by adding dust to a thick soup he could create a swarm of micro-organisms or germs which would spoil the broth. However, when the broth was isolated by being placed in a swan-necked flask - open to the air but trapping the dust - it was totally free from these micro-organisms and remained edible. He concluded that harmful micro-organisms existed in the environment, and, carried by dust, could settle on food and bring about its decay. This experiment clearly disproved the theory of spontaneous generation - the idea that germs were created in the substances themselves - but nonetheless this theory continued to be held by some bacteriologists for another twenty years or more.

xxxxxGiven his conclusion that harmful micro-organisms existed in dust in the air, it was not to be long before Pasteur was to connect these spores of living organisms with the spread of disease. When he did so, his germ theory of disease was to create a revolution in the medical world. Prior to this, however, Pasteur was called upon to go to the aid of another industry. As we shall see,  in 1865 (Vb) he was summoned to the south of the country where a disease attacking silkworms was seriously affecting the silk industry. His solution was to convince him further as to the nature of infectious diseases.

xxxxxIncidentally, it was while working as dean of the science faculty at Lille University that Pasteur introduced the idea of evening classes, aimed at providing theoretical as well as practical courses for the young men working in local industry. 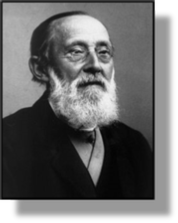 xxxxxThe German pathologist Rudolf Virchow (1821-1902), the founder of cellular pathology, was the first to demonstrate that diseased cells derive from the healthy cells of normal tissue. He did not accept Louis Pasteur’s germ theory of disease, but held that “all cells descend from other cells”, and that disease did not originate in tissue or organs, but was due to a slow process during which normal, individual cells gave rise to abnormal ones. His research into cell function in disease led to the first description of leukaemia - cancer of the blood - and a somewhat clearer understanding of inflammation and the growth of tumours. His major work, Cellular Pathology as Based upon Physiological and Pathological Histology, published in 1858, was based on a series of lectures he gave.

xxxxxVirchow was born in Schivelbein in Pomerania, Prussia, and attended the University of Berlin. In 1849 he joined the staff of the medical school of Wurzburg as professor of the new chair in pathological anatomy, and in 1856 returned to Berlin as director of the university’s pathological institute. He took a very active part in politics. He fought at the barricades in the 1848 Revolution, was a member of the Prussian Diet in the 1860s, and later became a member of the Reichstag. In matters of social reform he did much to improve the German public health service. Apart from his work in medicine, he was also a keen archaeologist and anthropologist, and wrote a number of papers on both subjects.

xxxxxIncidentally, as a member of the Prussian Diet and founder of the Progressive Party, he was totally opposed to the views of Otto von Bismarck, then foreign minister. Such was the enmity between them that in 1865 Bismarck challenged him to a duel. Virchow thought it best not to accept the challenge! 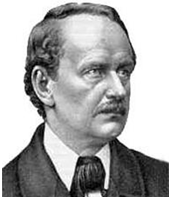 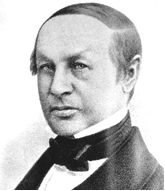 xxxxxThexactual concept of the cell theory is credited to two German scientists, the botanist Matthias Schleiden (1804-1881) (illustrated left), and the physiologist Theodor Schwann (1810-1882) (illustrated right). After leaving Heidelberg University in 1827, Schleiden practised law, but he soon made his hobby, botany, into a full time occupation. It was in 1838, following a microscopic study of plant structure, that he published Contributions to Phytogenesis, a work in which he put forward the theory that the cell was the basic unit of plants and that the development of new cells was the means of growth. The following year this cell theory was extended to animals by Schleiden’s friend Schwann. After attending the University of Berlin, he had made a microscopic study of animal tissue and arrived at the conclusion that all living things were made up of cells, and that the cell itself was the essential unit of animal structure. In 1839 he combined his research with that carried out by Schleiden and published his Microscopic Researches into Accordance in the Structure and Growth of Animals and Plants. 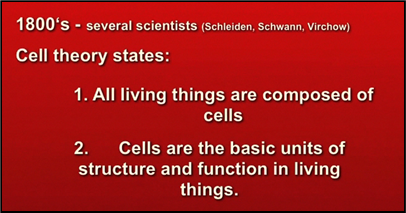 xxxxxSchwann also carried out valuable research into digestion - naming the enzyme pepsin -, studied nerve structure, and investigated both muscular and arterial contraction. He recognised the part played by micro-organisms in the process of putrefaction, and it was he who introduced the term “metabolism” to describe the chemical changes that take place in living tissue.

xxxxxIncidentally, it was the British physicist Robert Hook who first spoke of “cells” back in the 17th century, but it was left to Schleiden and Schwann to recognize their importance as the basic units of living things. ……

…… Schleiden was one of the first German biologists to accept Charles Darwin’s theory of evolution.