xxxxxAs we have seen, Alfonso VIII, King of Castile, fighting to repel the Moors from Spain, was badly defeated by the Almohads near the fortress of Alarcos in 1196 (R1). In 1212, however, he took his revenge when his large Christian force met the army of the Sultan, An-Nasir, and won a resounding victory at the battle of Las Navas de Tolosa. The days of the Almohads were now numbered and virtually came to an end when the Christians captured Cordoba in 1236 (H3), and Seville twelve years later. 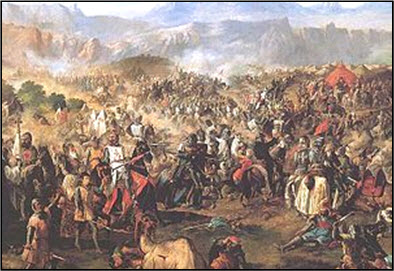 xxxxxAlfonso VIII, King of Castile, came to power in 1169 and spent his entire reign resisting the Moorish invaders. His constant attacks proved of no avail against the fanatical Almohads, but in 1194 he took the bold step of invading the province of Seville, an incursion which brought an immediate response from the Almohad caliph Abu Ya'qub Yusuf. As we have seen, he set out from Marrakesh with a large expeditionary force and in 1196 (R1) met up with Alfonso's forces near the fortress of Alarcos. In the battle that ensued the Christian forces were soundly beaten, and Alfonso and the remnants of his army were forced to take refuge in Toledo and Alarcos. Ya'qub entered Seville in triumph while his forces roamed at will across the Kingdom of Castile. 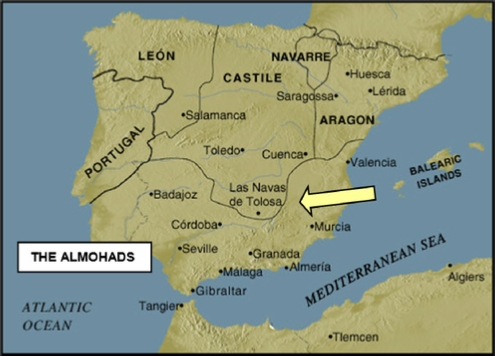 xxxxxSixteen years were to pass before Alfonso was able to take his revenge for the humiliating defeat suffered near Alarcos. In 1212 he led a large Christian force against the army of the Almohad Sultan, An-Nasir, and won a resounding victory at the battle of Las Navas de Tolosa (arrowed). It was a victory which, in fact, marked the beginning of the end for Almohad power in the Iberian peninsula. By 1233 the Almohad empire was beginning to disintegrate, and the Muslim grip on Spain and Portugal was coming to an end. As we shall see, the Arab occupation was virtually over with the capture of Cordoba in 1236 (H3), and the fall of Seville twelve years later.